The Saufley, in company with the USS Radford and USS Grayson, participated in the destruction of 24 (50/75) feet long Japanese barges. Return machine gun fire from Japanese barges did no damage to any of the ships. The first of October, with Radford, Grayson and Lavallette, this ship destroyed 9 of 10 enemy barges off Kolombangara, New Georgia Island; two were definitely sunk by this ship. Later that night the ship was under bombing attack; a near bomb put the SC radar out of commission and some thirty fragments penetrated the hull and superstructure. Thirteen men were injured including Lieutenant Claude Raymond Huffman.
He was sent to the US Naval Base Hospital #7 on 2 October 1943 and later died of his wounds.

The Knoxville News-Sentinel, October 8, 1943
Naval Lt. Claude R. Huffman, 32, one of Knoxville’s first physicians to volunteer when war loomed, died Monday as result of a chest wound suffered in action on Oct. 5. Navy Department notification of Lt. Huffman’s death reached the parents Mr. and Mrs. John P. Huffman, 209 East Springdale Avenue, late yesterday only a few hours after letters from him arrived for the family and several Knoxville friends. The day before, the parents had received official notice which said only that he had been wounded.  Other survivors are a sister, Miss Gussie Huffman, County Schools elementary supervisor; and a brother, H.H. Huffman, also of Knoxville.
Through his association as private physician, county physician, General Hospital house doctor and a field-and-stream enthusiast, Dr. Huffman leaves many friends here. His war record, which also was distinctive and packed with action, is believed to have ended in the South Pacific. He was schedulred for promotion to lieutenant commander this month.
A bachelor, Dr. Hffman volunteered in December, 1940, feeling that war was inevitable. He spent his first six months of active duty here, as naval medical examiner. Previously the Navy had no medical officer nearer than  Chattanooga. For the next 13 months he held a similar post at the Louisville station and then got the kind of war assignment he had been wanting. Dr. Huffman, in August, 1942, went to sea on a destroyer just launched. He fitted out his new ship’s hospital himself. After several months of Atlantic patrol duty, the Knoxvillian went with his new destroyer into the Pacific. He wrote home often and in recent months mentioned the frequenst action in which he participated.
“We’re really making it rough for the Japs and they make it pretty tough for us sometimes, too,” he said in one of his last letters. Lt. Huffman was known to have been in the Solomons area a few weeks ago. He wrote of seeing the place where his cousin, Marine Pfc. John Lilly, Watauga Avenue, was killed early in the Solomons campaign.
Then three years of private practive, he became county physician and held that post until he volunteered more than a year later. Dr. Huffman found principal relaxation in hunting and fishing. Two of his closest oudoor companions were Drs. Charles Smeltzer and Davis Simmons. Illustration of how this global war affects one neighborhood street, Pvt. Blair Hackworth, 213 East Springdale, lived second house from the Huffmans, and small Claude and Blair were playmates along the Block and started in school together. Pvt. Hackworth was killed in the initial North African landings last November. Dr. Huffman was a member of the American Medical Association and Knox County Medical Society and the Elks. But he couldn’t have left more friends if he had belonged to a dozen organizations. 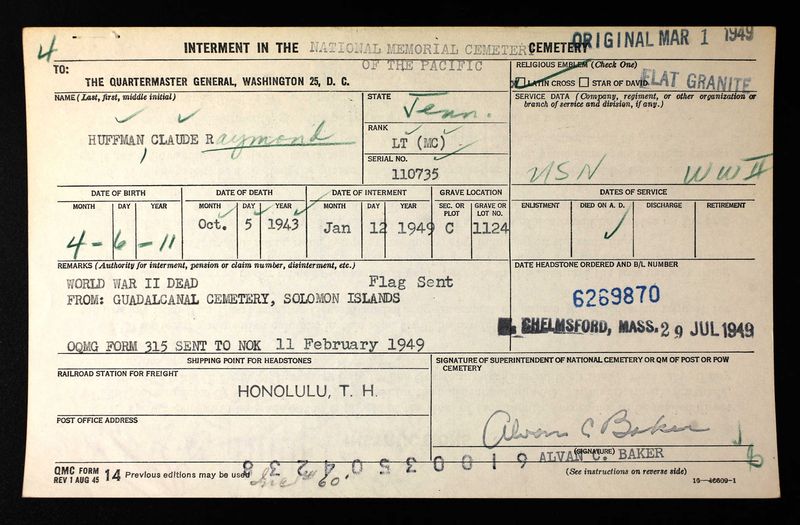 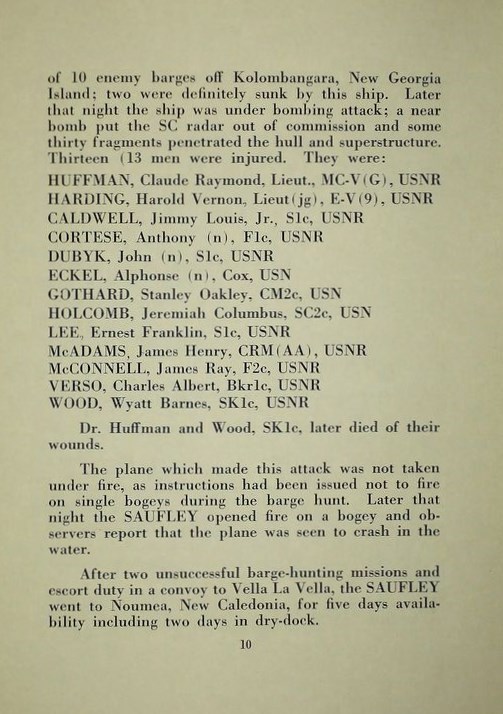 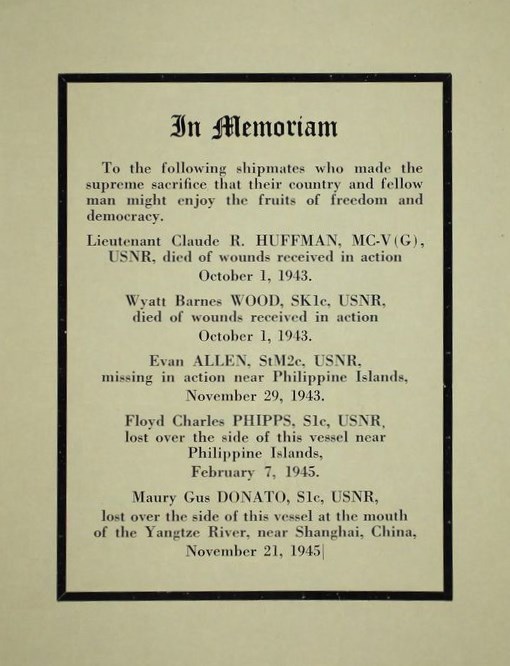 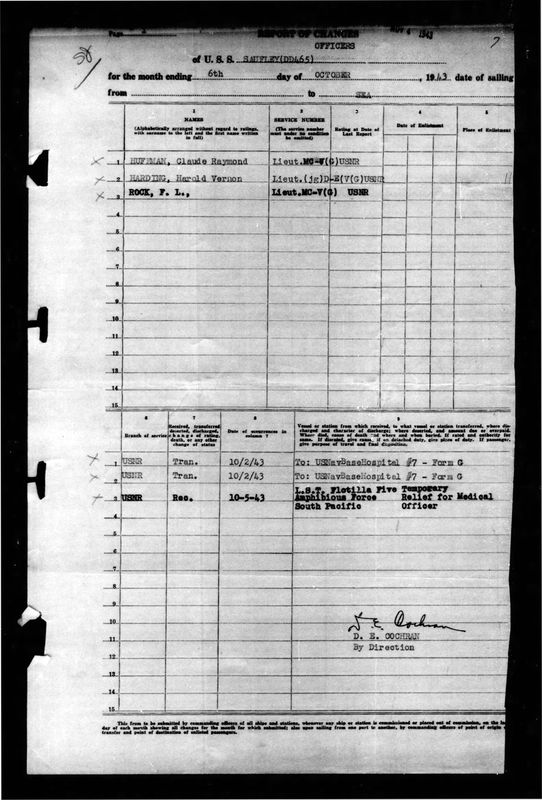 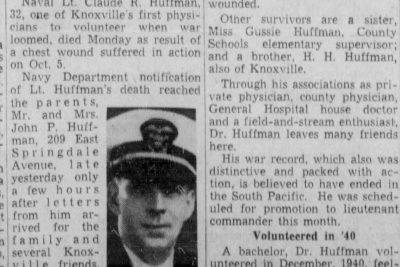 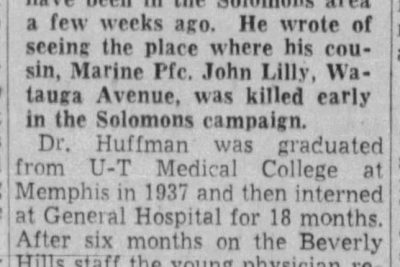 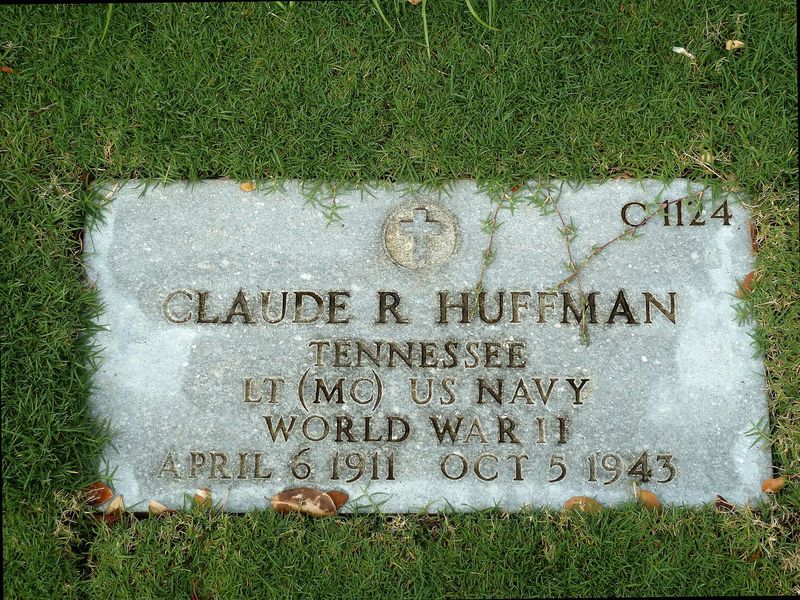