The Knoxville Journal, December 16, 1942
Elmer Blair Hackworth, 28, of Byington, was killed in action in North Africa Nov. 9, his wife learned here today. He was inducted into the Army on April 18, 1942 and had been stationed at Fort Bragg, N.C., before he was sent to Africa. Mr. Hackworth was a member of the Tank Corps. A son of the late Mr. and Mrs. E.B. Hackworth of Byinton, he was graduated from Karnes High School. Surviving, other than his widow, is one daughter, Carolyn Mae Hackworth, of Byington.

The Knoxville Journal, 14 January 1943
Memorial services for Pvt. Elmer Blair Hackworth, a former Fulton Sylphon Co. Employe who was killed in action Nov. 9 in the North African invasion will be held at Grace Baptist Church. 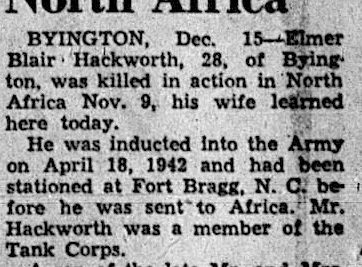 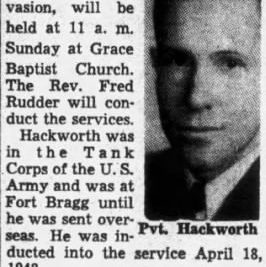