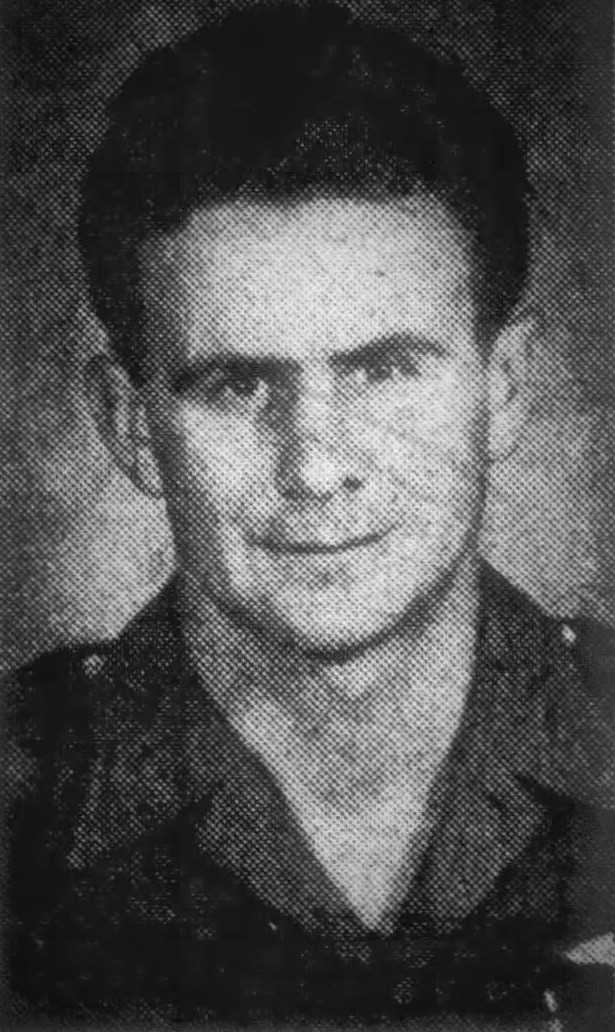 The Kingsport Times-News, April 6, 1952
Master Sergeant Verlin F. Todd, 34, son of Mrs. Frank Todd, 622 Fairview Ave., was among 15 airmen killed Friday night in a collision of two military planes over Mobile, Ala., suburbs, his family received word Saturday afternoon. A flight engineer from Buckley Air Base, Todd was a member of the huge C-124 cargo plane, which crashed onto a railroad yard after striking a C-47. “He always rode on the biggest planes,” his sister, Thelma Bell, commented Saturday afternoon. Todd was the second son who were killed in airplane crashes. His brother, James Robert Todd, was killed in World War II, shortly before D-Day when his plane went down in the English Channel. His body was not recovered. Sgt. Todd already had the Purple Heart from a previous crash when his plane was shot down by Germans as he flew into Sicily in World War II. A career airman, he first entered the Air Corps at Wright Field when he was 17, with his parents signing for him. He bought his way out a year later but enlisted again on August 27, 1939, at Patterson Field, Ohio, and had remained in the service for the last 12 years. As a member of an Air Corps troop squadron, he participated in the first of World War II transportation of paratroopers abroad and helped carry U.S. soldiers to Iceland, Greenland and England. Attached to the 554th Base Unit, he was engaged in the following campaigns in World War II: French Moroccan, Algeria, Sicilian, Tunisian, Italian, Western European and Air Offensive  Europe. The Purple Heart was awarded to him as a result of chest and head injuries in the Sicilian plane crash on July 14, 1943. In his six years of continental and foreign service in the war, he had served as line chief of his unit of paratroop hauling C-47 planes; his group dropped paratroops over Cherbourg and Anzio. He was among the first airmen to fly in the Berlin Airlift. After his discharge on Oct. 8, 1945, he re-enlisted about 90 days later and had been stationed at various air bases and schools. He was recently promoted to chief flight engineer and had been flying in the C-124 Globemasters. Prior to the C-124 ships, he had flown on C-47’s. For the past five years he had been stationed at Mobile, where his wife, the former Kate Pierce of Sullivan Gardens, and his six-year-old daughter, Donna Ruth, live. Other survivors include his mother and three sisters, Mrs. Bell, Mrs. Rosalie Wiley of Memphis and Mrs. Eileen Randolph of Casper, Wyo. His father died five years ago.
Todd recently became a 32nd Degree Mason and was a member of the First Presbyterian Church of Kingsport. He attended Jackson School and was graduated from Dobyns-Bennett High School. 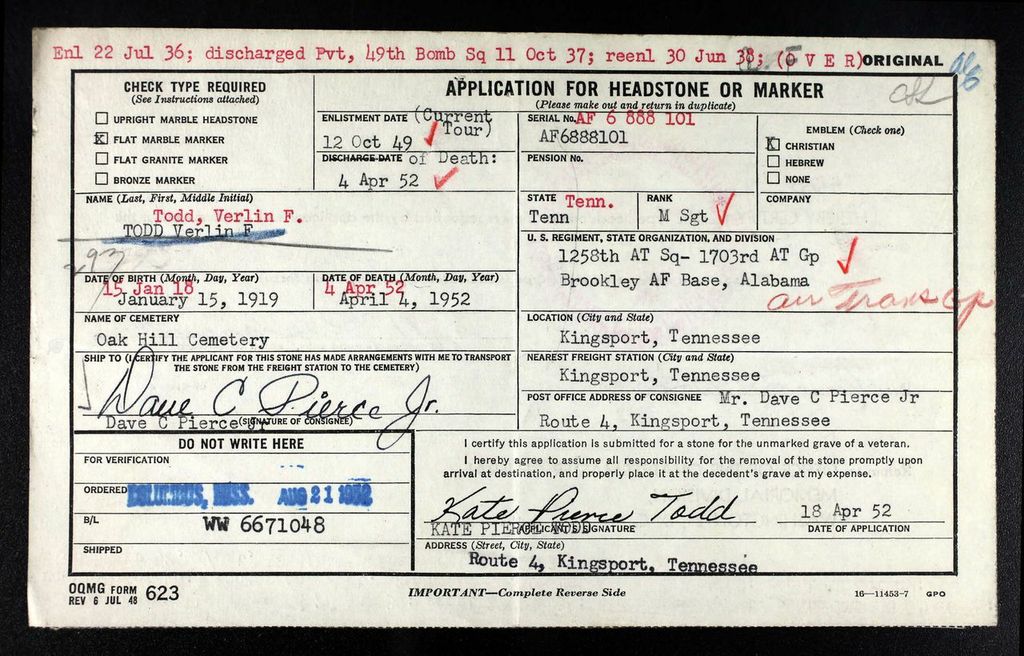 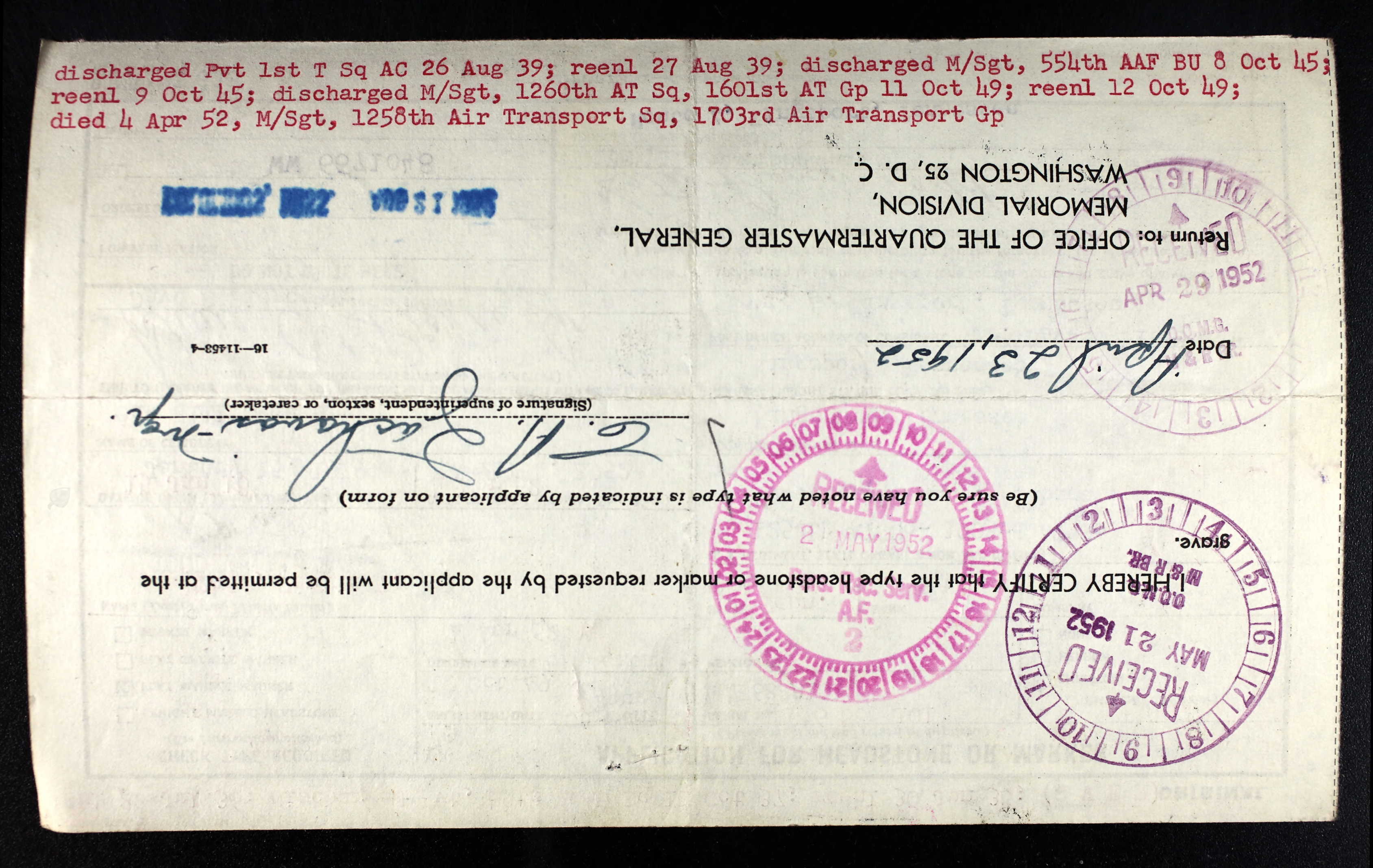 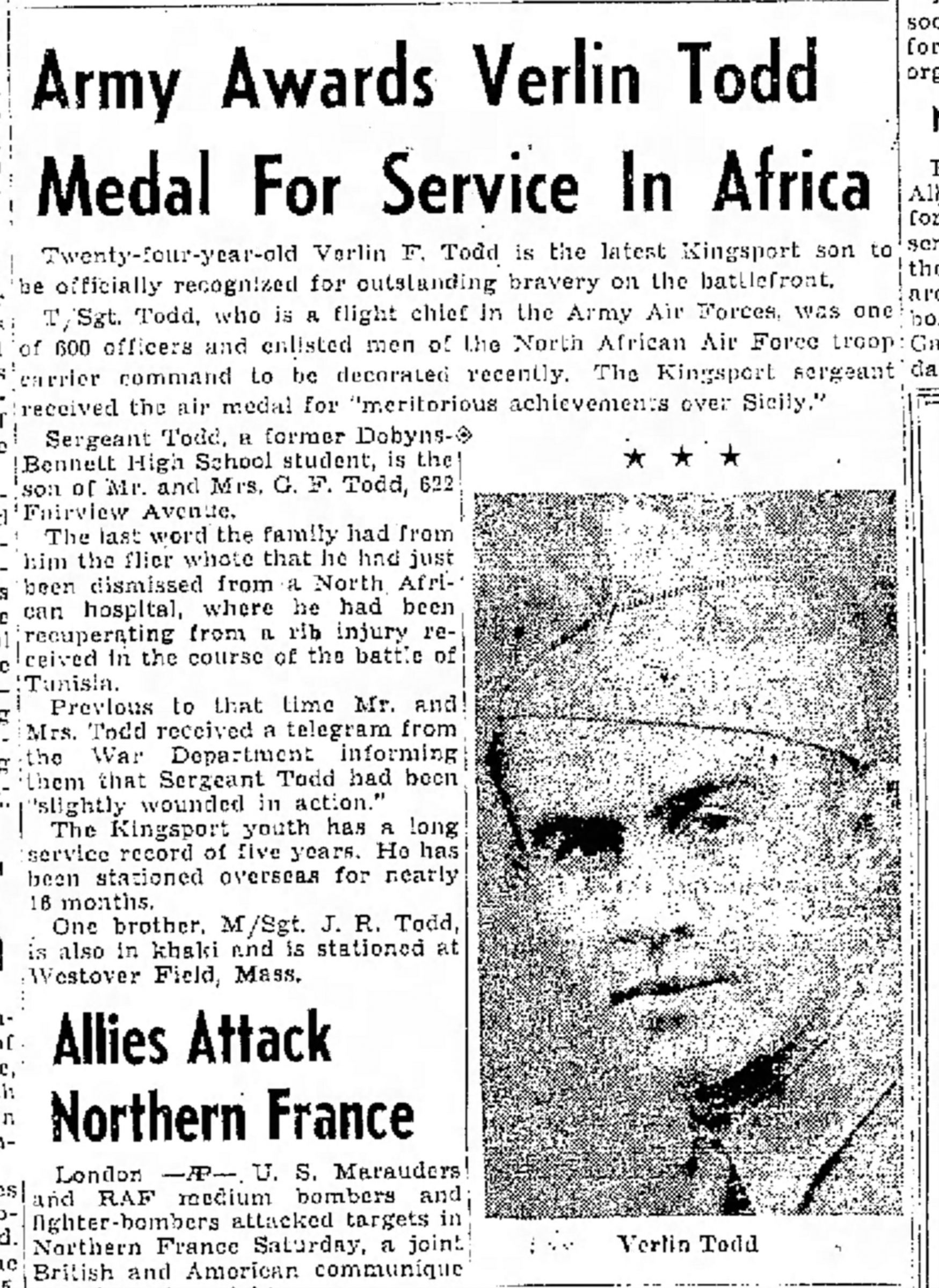 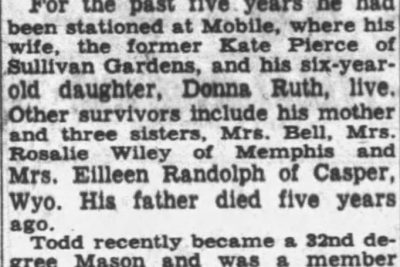 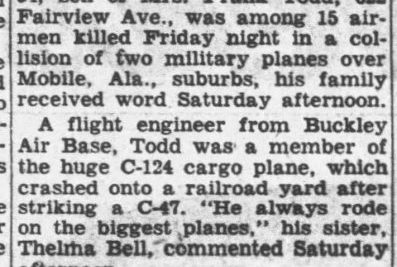