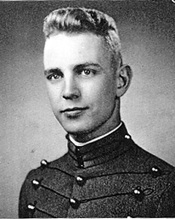 Medon Armin Bitzer
Killed in Action
USMA Class of 1950, First Lieutenant Bitzer was the pilot of a RF-51D Mustang fighter bomber with the 67th Fighter Bomber Squadron, 18th Fighter Bomber Group. On January 8, 1952, while on a combat mission, his aircraft received a direct hit by anti-aircraft fire, burst into flames and crashed. His remains were not recovered. His name is inscribed on the Courts of the Missing at the Honolulu Memorial. First Lieutenant Bitzer was awarded the Air Medal, the Purple Heart, the Korean Service Medal, the United Nations Service Medal, the National Defense Service Medal, the Korean Presidential Unit Citation and the Republic of Korea War Service Medal.