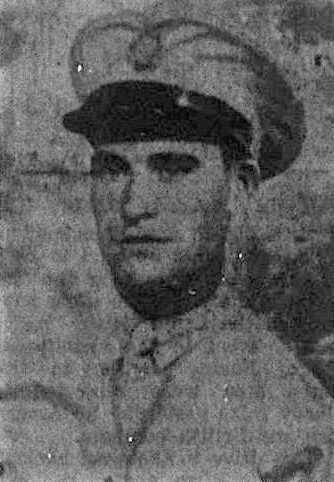 PFC Jones was killed in action during the crossing of Prum river in Germany. He is buried at Mount Tabor UMC Cemetery Camp Creek, Greene County, Tennessee. His brother Nick G. Jones died on 5 June 1945

The Greeneville Sun, April 10, 1945
Pfc. Derice O. Jones was killed in action, somewhere in Germany on February 9. His parents, Mr. and Mrs. Robert R. Jones, Greeneville, Rt. 3, have received the following letter from his Chaplain.
“The Officers and Enlisted men of the 23nd Infantry Regiment, join me in the regret that we must extend to you our sincerest sympathy on the death of your son, Pvt. First Class Derice O. Jones. Your boy was a part of our “Famous Fourth Division”, as he was a part of your home and we shall miss him even as you yourself will miss him. Your son was killed in action, somewhere in Germany on February 9, 1945. He now lies buried in an American Military Cemetery in Belgium. Appropriate burial services were conducted for him by a Protestant Army Chaplain. As a soldier, your boy bravely fought and bravely died, to stamp out the threat of slavery which hangs over the world today. As a member of our great Allies Armies, he brougt liberation, new hope and new life to Nations that have been insulted, robbed, tortured, defiled and enslaved by their conquerors. With such courage and strength in his heart he walked humbly with his God, and was therefore worthy to conquer. Almighty God has received your son’s Supreme Sacrifice. It is, therefore, with the utmost confidence that we offer to God this fervent prayer for your boy. May the angels receive him at his coming and lead him into Paradise where he may have rest everlasting.As we pray for you and your son, we, the buddies of your boy, ask a rememberance in your prayers for those of us who still fight on.”
With deepest sympathy,
Chaplain (1st Lt.) Gerald J. Rabe

The Greeneville Sun, Thursday March 31, 1949
The body of Derece O’Keith Jones, aged 26, the second son of Mrs. Robert E. Jones to have lost his life in World War II, arrived in Greeneville this morning and was removed to the Doughty-Stevens Funeral Home. Nick G. Jones, the other son, died of a heart attack while in service. Survivors in addition to Mrs. Jones are three brothers, Cleve and Dean Jones of Greeneville, Marvin Jones of Gallatin and three sisters, Mrs. Lena Wykle, Mrs. Zola Barham, both of Greeneville, and Mrs. Elsie Dixon of Johnson City. The funeral of Pvt. Jones will be held Sunday at Mt. Tabor. Burial will be in the nearby cemetery. Pvt. Jones entered the U.S. Army on October 7, 1941 and was killed in action somewhere in Germany on Feb. 9, 1945. He had his military training at Camp Wheeler, Ga. And Fort Jackson, S.C. 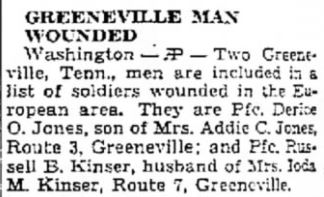 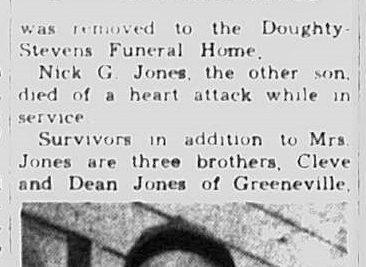