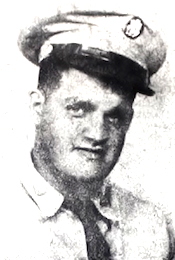 Private First Class Truelove was a member of Company G, 2nd Battalion, 5th Cavalry Regiment, 1st Cavalry Division. He was taken Prisoner of War while fighting the enemy in North Korea on November 28, 1950 and died while a prisoner on June 30, 1951. His remains were not recovered. His name is inscribed on the Courts of the Missing at the Honolulu Memorial.

His brother Thomas William died in Vietnam and is buried at Monte Vista Memorialpark in Johnson City.

The Johnson City Press-Chronicle, August 14, 1953
A Johnson City mother who had almost given up hope that her son might ever return to her, received another shattering blow Thursday night. The Defense Department notified Mrs. Gladys Truelove, Route 1, that her son, PFC. Bobby L. Truelove, 20, was listed by the Communists as having escaped or died in a prison camp. An uncle, James F. Willingham said Mrs. Truelove already had been told that PFC. Truelove was missing in action in November, 1950, about six months after he reached Korea.  He enlisted int he Army May 12, 1950, while still in high school and served with the 1st Calvary Division. 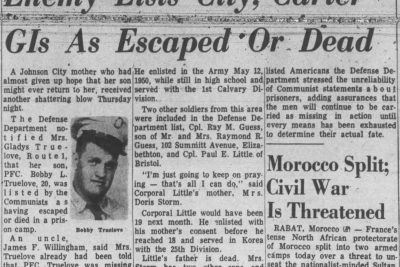