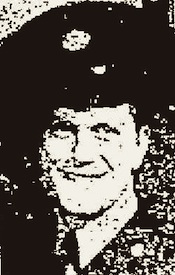 He was a mechanic with an ordnance unit and had received specialist training overseas. (3422nd Ordnance Automotive Maintenance Co)

The Kingsport Times, 25 June 1944
Second Kingsport soldier reported lost in the invasion of France is T-Sgt Z.T. Peters, whose mother, Mrs. W.P. Peters, Highland Street, was informed Friday that her son was killed in action, June 9, in the European theater of war. Sergeant Peters, 26 had been in uniform for three years, two of which were spent overseas, at an assignment in England. He was a mechanic with an ordnance unit, and had received specialist training overseas. Sergeant Peters attended high school in Midway, Va., and was employed in Kingsport by the Tennessee Eastman Corporation. In addition to his mother, he is survived by three brothers, Eugene, with the Army in the South Pacific, Orville Peters of Kingsport and Ernest Peters of Gate City; and two sister, Mrs. Mary Carter of Gate City and Miss Lucille Peters of Kingsport. First Kingsport casualty of the invasion was Captain Paul F. Harkleroad, of an Army Combat Engineer unit, who was killed on Invasion Day, June 6.