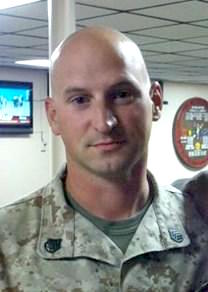 Staff Sgt. David Allen Wyatt, age 35, of Hixson, selflessly gave his life Thursday, July 16, 2015 in Chattanooga, Tennessee while protecting his Chattanooga community, his country and his fellow Marines. David will always be remembered for the heroic way in which he lived, served, and died.

He was born November 7, 1979 in Morganton, North Carolina. He grew up in Ozark and Russellville, Arkansas. One of David’s proud accomplishments was achieving the rank of Eagle Scout through the Boy Scouts of America.

He graduated from Russellville High School in 1998 and attended Piedmont Community College in Morganton, North Carolina, Arkansas Tech, and MSU in Missoula, Montana.

Following the events of 9/11, being the longtime patriot he was, David joined the United States Marine Corp. He graduated Boot Camp from Parris Island, South Carolina which began an eleven year career that led him to serve in multiple locations including Okinawa, Japan, 29 Palms, California, Camp Lejeune, North Carolina, Kuwait, and Korea. He courageously fought in both Iraq and Afghanistan.

David was a loving and devoted husband, father, son, brother, and friend and will be remembered for his dry humor.

He had participated in the Toys for Tots campaign and was recently assigned as the coordinator for the up-coming drive for 2015.

Because of his love for the Chattanooga community and their outpouring of support during this time, his family has chosen to lay him to rest in Chattanooga National Cemetery with full military honors.

Members of the U. S. Marine Corp that served with David will be active and honorary pallbearers.

In lieu of flowers, memorial contributions may be made to the Boy Scouts of America at www.scouting.org; Toys for Tots, at www.chattanooga-tn.toysfortots.org; or the Forgotten Child Fund at www.forgottenchildfund.org.

Arrangements are by the North Chapel of Chattanooga Funeral Home, Crematory and Florist, 5401 Highway 153, Hixson, TN 37343.