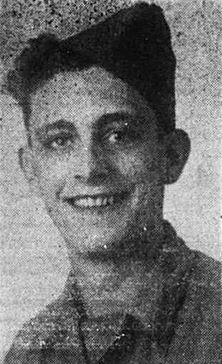 William W. “Bill” Ridenour was born in 1920 in Tennessee to Oscar Lee Ridenour and Callie M. Richardson.
He was in the Chemical Warfare service and received his training at Camp  Gordon in Georgia. He was sent oveseas in May and was wounded in the Invasion of Sicily July 12, and was in the hospital for two months. He had been in the Army two years. Pfc. Ridenour was a graduate of LaFollette High School in 1941. He played on both the Football and basketball teams.

The LaFollette Press, November 2, 1944
Pvt. William W. Ridenour, on the right, was awarded the purple Heart by Colonel John H. Sturgeon, at the 12th General Hospital on August 11, 1943. Pvt. Ridenour was wounded by mortal Shell fire fragment near Gela, Sicily on July 12, 1943, while operating a Telephone at the mortar Company. Mr. and Mrs. Oscar Ridenour, parents of Bill, later received word from the War Department stating that he died of wounds received while on duty. This picture came to them along with the personal belongings of Pvt. Ridenour. They also received a Marksman Medal, a Swastika Ring and Cameo pin, glasses, a fountain pen, pictures and other things. His mother has also received the Purple Heart.

Pfc Ridenour was killed in action in Italy. He is memorialized at Sicily-Rome American Cemetery, Nettuno, Italy. 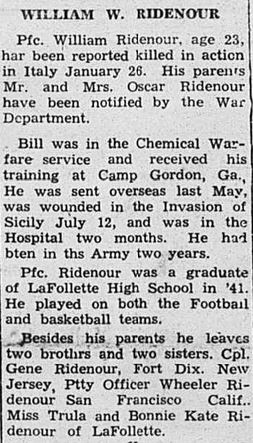 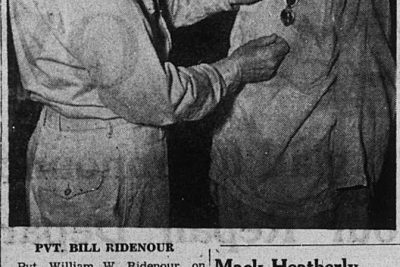