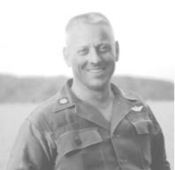 “Bill and I served together in the 169th Engineer Construction Battalion, Fort Stewart, GA, during 1962-63. We were both Captains at the time. I left the unit in 1963 and was unaware of his assignments or location after that period. Upon return from Vietnam in 1968 and located with the ROTC Detachment, University of Tennessee, Knoxville, I was assigned as a Survival Assistance Officer several times during a two year period, 1968-70. One Sunday afternoon, 3rd Army Hqs in Atlanta, GA called with an assignment as Notification Officer for Major William Wallace Ford. I asked if he was an engineer and received an affirmative reply. When they informed me of his address in Fountain City, TN a suburb of Knoxville, I then realized that it was him. They only had to give me his address for I knew his wife. I informed 3rd Army to assign me the SAO duties also as I knew the family. Bill is interred in the National Cemetery in Knoxville, TN and I visit his grave periodically.” -LTC (Ret) Lynn D. Hickman

-” I served with Bill in the 937th Engineer Company (Aviation) in the Panama Canal Zone in 1963-64 and again at Ft. Benning, GA and Vietnam with the 174th AHC in 1965-66. We were both Engineer Branch aviators. Although older than his peers due to a break in active service, he was the kindest, generous, and most considerate man I have ever known. Bill had a good sense of humor and an ever-present smile. He dearly loved his wife and young daughter and often told me how fortunate he felt to have them as his family. While at Ft. Benning, he asked me to accompany him to Knoxville (Fountain City) to visit his family on two occasions. We shared a berth on the USNS Upshur as the unit sailed to Vietnam and a hex tent after arriving at Lane AHP, 12 miles west of Qui Nhon. He was transferred to the 155th AHC at Ban Me Thout on 15 April 1966 in a DEROS adjustment. I spoke to him last on 19 May when he flew to Lane to visit me. That was the last time I ever saw him and was shocked to learn of his death many years later during research on a book on the 174th’s early service in viet. He was killed after only 12 days in country on his second tour. He was an exceptional individual and it was an honor to have known him.” – Martin F. Heuer, LTC

– Major Bill Ford was an original member of the 174th AHC who deployed with the unit on the USS Upshur. He survived his first tour in Vietnam and was KIA on his second tour in another unit. The following account was provided by Marty Heuer in April 2007:

Major Bill Ford was assigned to the newly-activated 174th on Wednesday, 10 November 1965 at Fort Benning, GA. Then still a captain, Bill was an older, prematurely gray-haired pilot but very personable. He was born on 25 August 1927 in Knoxville. He had joined the Army on 24 February 1946, was commissioned in the Corps of Engineers in 1952, and had a break in active service. I reported on the same day and reunited with Bill at the BOQ to which we’d both been assigned. We were both Engineer Branch aviators and had served together in the 937th Engineer Company (Aviation) in the Panama Canal Zone in 1963-64. He was now 38 years old, on the promotion list to Major, and not at all happy to be going to viet.

We reminisced for a couple of hours about our tours with the 937th and mutual acquaintances and became close friends during our training at Fort Benning. He was the kindest, most generous, and considerate man I have ever known. Bill had a good sense of humor and an ever-present smile. He dearly loved his wife and young daughter and often told me how fortunate he felt to have them as his family. While at Fort Benning, he asked me to accompany him to Knoxville, (Fountain City) Tennessee to visit his family on two occasions.

Bill was promoted to major shortly before we departed Fort Benning. We shared a berth on the USNS Upshur as the unit sailed to viet. I took the photo (left) of him at about 0700 on the Upshur on 7 April 1966 just before we disembarked en route to Lane AHP. We shared a hex tent on one of the terraces until 15 April when Bill was transferred to the 155th AHC at Ban Me Thout in the DEROS adjustment.

Bill returned to the states in March 1967. He was stationed, at least part of the time, at Fort Rucker, AL in a non-flying assignment, but it wasn’t for long as he was sent back to Vietnam for his second tour on 29 December 1968. The specific unit he was serving in has not been identified, except that the official information concerning his death listed the major unit to which he was assigned as “MACV advisors.” That official account went on to say that Bill was Killed In Action from an incident on 10 January 1969 while performing the duty of pilot. However, the official listing gave the cause of his death as “ground casualty” and the reason as “multiple-fragment wounds.” He had been in Vietnam only 12 days. The location of his death was Phong Dinh Province in the IV Corps area, meaning that he was serving in the southeastern section of the RVN, probably out of Can Tho, the Province capital, situated on the Mekong River. Another official description of his death said: “Killed as a result of hostile action; ground casualty from weapons.” Bill is buried at Knoxville National Cemetery. It was an honor for me to have known and served with Bill Ford. (Information and photo provided by Marty Heuer, April 2007)