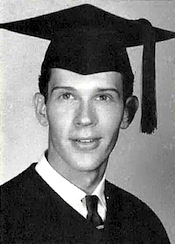 Major William Thomas McPhail was born June 5, 1939, and was originally from Chattanooga, Tennessee. He served his country in the Vietnam War in the United States Air Force, with 41st Tactical Airlift Squadron, 374th Tactical Airlift Wing, 7th Air Force, out of Ubon Royal Thai Air Force Base, where he served as a navigator. On May 22, 1968, he was aboard a Lockheed Hercules Transport Aircraft (C-130A) on a mission near Muong Nong, Savannakhet province, Laos, when radio contact was lost; his plane and its crew were listed as missing in action from that date. On June 29, 1978, the Air Force officially declared its crew, including Major McPhail, to be deceased.

The remains of nine U.S. airmen who were missing in action from the Vietnam War have been accounted for and returned to their families for burial with full military honors. The individually identified remains of each airman were previously returned to their families for burial. On May 22, 1968, the men were aboard a C-130A Hercules on an evening flare mission over northern Salavan Province, Laos. Fifteen minutes after the aircraft made a radio call, the crew of another U.S. aircraft observed a large ground fire near the last known location of the aircraft. Search and rescue attempts were not initiated because of heavy antiaircraft fire. Analysts developed case leads with information spanning more than 40 years. Through interviews with eyewitnesses and research in the National Archives, several locations in Laos and South Vietnam were pinpointed as potential crash sites.

Major McPhail is memorialized on both the Vietnam Veterans Memorial on Panel 65E, Line 14, and the Courts of the Missing at the Honolulu Memorial. The following is a tribute and further history for Major McPhail:

Roy Spencer
Blind Bat Pilot-Vietnam Veteran
C130A Blind Bat FAC Hero
On 22 May 1968, Lt. Col. William H. Mason, pilot; Capt. Thomas B. Mitchell, co-pilot; Capt. William T. McPhail, navigator; Major Jerry L. Chambers, observer; then SSgt. Calvin C. Glover, flight engineer; AM1 Thomas E. Knebel, crewchief; Sgt. Gary Pate, loadmaster; AM1 Melvin D. Rash, loadmaster; and AM1 John Q. Adam, loadmaster; comprised the crew of an C130A aircraft, call sign “Blind Bat 01.” They were on a normally scheduled night flair drop mission on a frag operation that was to orbit the target area. The region of eastern Laos adjacent to the northernmost provinces of South Vietnam was known as Foxtrot and contained major arteries of the infamous Ho Chi Minh Trail. The target was in the vicinity of the communist airfield located at Tchepone, Savannakhet Province, Laos. When North Vietnam began to increase its military strength in South viet, NVA and Vietnam Cong troops again intruded on neutral Laos for sanctuary, as the Vietnam Minh had done during the war with the French some years before. This border road was used by the Communists to transport weapons, supplies and troops from North Vietnam into South Vietnam, and was frequently no more than a path cut through the jungle covered mountains. US forces used all assets available to them to stop this flow of men and supplies from moving south into the war zone. Weather conditions in the area were scattered clouds with visibility of 6 miles. The terrain was mountainous with heavy foliage and an occasional clearing. At 2055 hours Blind Bat 01 made its last radio contact with the airborne mission command and control center as it was orbiting the target area. At that time the aircraft was positioned near the city of Muong Nong and there was no indication of trouble. By 2125 hours, the airborne command and control center was unable to raise Blind Bat 01 on the radio, another C130A, call sign Blind Bat 02, was called in to investigate non-contact with Blind Bat 01 and it arrived onsite 15 minutes later. Blind Bat 02 found a large fire on the ground, but when they attempted to investigate the fire, they were driven off by enemy anti-aircraft artillery (AAA) fire. Another aircraft was called in to participate in the aerial search that was equipped with night photography equipment. The photographs it took could not confirm whether or not the fire was associated with an aircraft crash site, but the photo interpreters were of the opinion that the circular fire resembled that of a crashed aircraft. The photography showed no evidence of any parachutes on the ground, and of the aircrews heard mayday calls or emergency beeper signals emanating from the jungle below. Because of a lack of any positive evidence of survivors, aircraft wreckage or beepers, no formal search and rescue (SAR) effort was initiated. However, aerial photographs were taken the following day. Again, there was no indication of aircraft wreckage, and the fire burning on the ground the night before had been extinguished. Likewise, there were no signs of survivors in or around the area. At the time the aerial search effort was terminated, Jerry Chambers, William Mason, Thomas Knebel, John Adam, William McPhail, Gary Pate, Melvin Rash and Calvin Glover were listed Missing In Action. The location of loss was deep within enemy held territory.
Jun 29, 2007

My daughter, Amy Le Hill, wore the “missing in action” bracelet for Major McPhail for ten or more years. She chose the Major because they shared the same birthday. She was proud to be a supporter of all veterans and was a member of American Legion Post 109, Corona del Tucson, Arizona. Her dream was to go to the Memorial in Washington DC and place a rose at the Major’s name. Her dream will be carried out by friends and family as she was hit by a drunk driver on May 2, 2015 and died of her injuries August 21, 2015. Her son now has this bracelet and will wear it as soon as his US Army training is completed. God Bless our troops and their families.
–Submitted by Lyn Brown