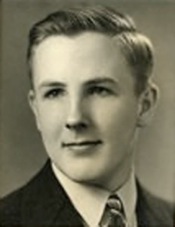 Fire Controlman Third Class Petty Officer William Robert Busch was killed with all hands onboard USS Corvina (SS-226) on 16 November 1943 south of Truk. Corvina, venturing into enemy waters for her first time, put out from Pearl Harbor on her maiden patrol on 4 November 1943 under the command of Commander R.S. Rooney, topped off her fuel tanks at Johnston Island 6 November 1943, and was never heard from again.

Her assignment had been a dangerous one: to patrol as closely as possible to the heavily guarded stronghold of Truk as enemy anti-submarine measures would permit, and to intercept any Japanese sortie endangering the forthcoming American invasion of the Gilberts. Japanese records report that I-176 fired three torpedoes at an enemy submarine south of Truk 16 November, claiming two hits which resulted in the explosion of the target. Corvina was the only American submarine to be sunk by a Japanese submarine in the entire war. USS Corvina (SS-226) was lost with 82 officers and men.
Submitted by U.S. Submarine Veterans, Inc.
http://oneternalpatrol.com/busch-w-r.htm