Master Sergeant Stephens was a member of Company F, 2nd Battalion, 27th Infantry Regiment, 25th Infantry Division. He was Killed in Action while fighting the enemy in North Korea. His remains were not recovered.

By November 24, 1950, the 25th Infantry Division had pushed far into North Korea and was just beginning to experience resistance from Chinese Communist Forces (CCF). Division commanders organized Task Force Dolvin (soon renamed Task Force Wilson) to attack along a road axis in the center of the Division sector and later to establish defensive positions north of the town of Ipsok. During the night of the 26th, the CCF attacked the Task Force and infiltrated its lines at several points, threatening but failing to seize the artillery. The Task Force began its withdrawal south the following day.

Master Sergeant William Millard Stephens joined the U.S. Army from Tennessee and was a member of F Company, 2nd Battalion, 27th Infantry Regiment, 25th Infantry Division. On November 27, 1950, he was killed in action while fighting the enemy in North Korea. The exact circumstances surrounding MSG Stephens’ loss are unknown, and his body was not recovered following his loss. He was not identified among remains returned to U.S. custody after the ceasefire, and he is still unaccounted-for. Today, Master Sergeant Stephens is memorialized on the Courts of the Missing at the National Memorial Cemetery of the Pacific.

The Progressive Age, Scottsboro, Alabama, February 8, 1951
Mr. and Mrs. James P. Stephens of Stevenson, received a message Monday, Feb. 5th, that their son, Master Sgt. William M. Stephens, had been killed in Korea Nov. 27th. The following message was received: “The secretary of the Army has asked me to express to you his deep regret that your son, Master Sgt. William M. Stephens, was killed in action in Korea, Nov. 27, 1950. Confirming letter will follow. Delay in notification is due to difficulty in ascertaining your address. Edward F. Witzell, Maj.-Gen. U.S.A. The Adj. Gen. Of the Army.”
Master Sergeant Stephens, age 41 years, had been in the service of the U.S. Army for the past 17 years. He had been overseas for the past two years, located in Japan then on into Korea with the 25th Inf. Div. DUring World War II he served in the European theater of War. He is survived by his parents of Stevenson; three sisters, Mrs. Jewell Casey, of Cheyenne, Wyoming, Mrs. Leah Timerlake, Chattanooga, and Mrs. Mae Bowman, Birmingham; two brothers, Victor Stephens, Stevenson, Master Sgt. H.R. Stephens, of Smyrna Air Base, Smyrna, Tenn.
Mr. and Mrs. Stephens have been residents of Stevenson and have many friends here whho deeply sympthize with them in their sorrow. 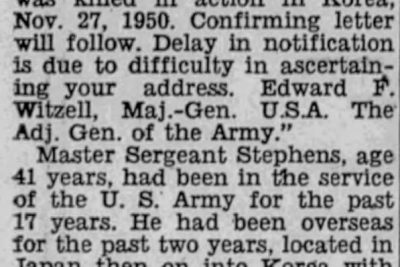