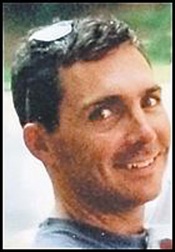 He was buried at Oakview Baptist Church Cemetery, Walland, Tennessee.

The Green Berets normally work in the shadows. On Saturday morning a few stepped forward under a brilliant late summer sun to show their emotions. Master Sgt. Jeff Mason and Sgt. 1st Class Vince Makela had to pause and hold tears back from mist-filled eyes as they spoke about Sgt. 1st Class William M. Bennett. “He was the most determined, fierce-competitor, competent Special Forces soldier that I have ever had the pleasure of serving with,” Mason said as beads of perspiration collected under his green beret.

Bennett, a 35-year-old father and Special Forces veteran, was gunned down last Friday in a pre-dawn raid roughly 75 miles east of Baghdad. Military officials say his team was in pursuit of “suspected bad guys.” On Saturday morning Bennett was laid to rest outside the same red brick church where he attended youth group as a child and where he married his wife Allison 14 years ago. More than 100 people gathered in the foothills of the Smoky Mountains at the Oak View Baptist Church to pay their final respects to a local boy who had grown into a war hero and ultimately gave his life for America. American flags lined the road that led to the church and residents lowered their flags to half-staff across the rural East Tennessee hamlet.

Bennett was a 1986 Heritage High School graduate, the senior medic on a 12-man group that specialized in Middle East operations, and the father of an 8-year-old son. “He has all the same characteristics as his dad,” Makela said of Bennett’s son, Seth. “He’s brave and has a strong character, and now he will help Allison a lot.” Bennett joined the Army for the G.I. Bill benefits soon after graduating from high school but quickly decided to make a career out of the Army. “He joined wanting to earn money for college, and it just grabbed him,” said Bennett’s aunt, Karolyn Wood. Wood and her husband Michael cared for Bennett while he was in high school. “Even before this, I said he was my hero,” Michael Wood said.

His Special Forces comrades knew Bennett as a “gym rat” who always could find a place to work out. His dedication to physical fitness and love of soldiering led him to the Special Forces. He ascended to become the senior medic in his group and learned Arabic for assignments in the Middle East.

He was a veteran of Operation Just Cause in Panama, Operation Desert Storm and Operation Enduring Freedom, where he linked up with the Northern Alliance in Afghanistan to oust the Taliban from power. “He’s been all over the world, but he loved to come here and be with these people he loved,” Michael Wood said. The raid also claimed the live of Master Sgt. Kevin N. Morehead, 33, of Little Rock, Ark., and injured seven others. Makela was one of the injured soldiers. “He came over to see if I was all right, and I was great compared to other injuries,” Makela said. “From there he led to the fight.”

Mason recalled the two soldiers sharing cigars not long ago in Baghdad and Bennett anticipating a trip home to Blount County. “He loved the outdoors and wanted to come home to go kayaking and climbing mountains,” Mason said. His group, based at Fort Campbell, Ky., was two weeks away from completing its eight-month tour. Both Bennett and Morehead have been recommended for the Silver Star, a medal reserved for extreme acts of bravery, military officials said. “Tennessee lost a great son and America lost a great soldier,” Makela said.
By Bryan Mitchell, Knoxville News Sentinel, September 21, 2003
Copyright 2003, KnoxNews. All Rights Reserved.