Private William M. Atkins was assigned to the 83rd Chemical Mortar Battalion. On 26 January 1944 HMS LST-422, a lend lease ship, arrived off Anzio Harbor with 3 companies of the 83rd Chemical Mortar Battalion aboard, anchoring at the end of the convoy line at 01h00. Heavy seas of 20 to 30 feet were tossing ships about and LST 422 pulled loose from her anchorage and began to drift. As the Captain was alerted the LST drifted into a minefield and struck a mine. The ship fuel was set afire and began a conflagration, which engulfed the ship trapping troops below deck. Orders to abandon ship were given and men were picked up by waiting rescue ships. Over 400 lives were lost between the British crew and the US Army soldiers. To make the disaster worse LCI-32 coming to help with the rescue hit a mine and 43 American sailors were lost.
Atkins died 26 January 1944 and is listed on the Tablets of the Missing Sicily-Rome American Cemetery, Nettuno, Italy. 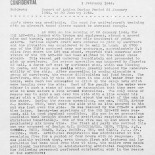