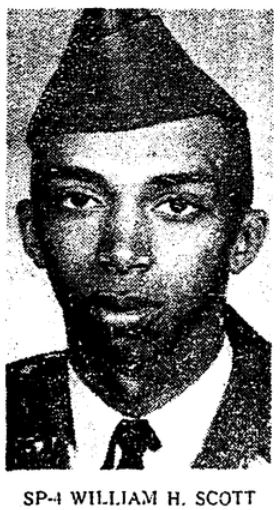 “He died while walking point for Recon Platoon, Company E, 2/1 (2nd Battalion, 1st Infantry) Americal Division. I was there when he stepped on a land mine. I was hit with shrapnel. He was a very strong man and a good soldier. All of us gave some, he gave all he had. He put his life on the line for us by walking point and made the ultimate sacrifice. He was very brave.” -William F. McGee, served with Scott

Sp./4 William H. Scott, 20, Knoxville, was killed in action Tuesday in Vietnam, his family has been informed. He was the son of Mrs. Deborah Scott, 513 Douglas St. and William Lee Scott also of Knoxville. Specialist Scott was killed on a military mission when a booby trap detonated, the family was informed. Specialist Scott, who was graduated in 1967 from Rule High School, was promoted to specialist four in January. He was stationed in Chu Lai Province, South Vietnam in August. He also leaves two brothers, Sherby D. and Samuel Scott, and two sisters, Janet and Wanda Gail Scott, all of Knoxville. The body will be returned to Knoxville. Jarnigan & Sons Mortuary will be in charge of arrangements. 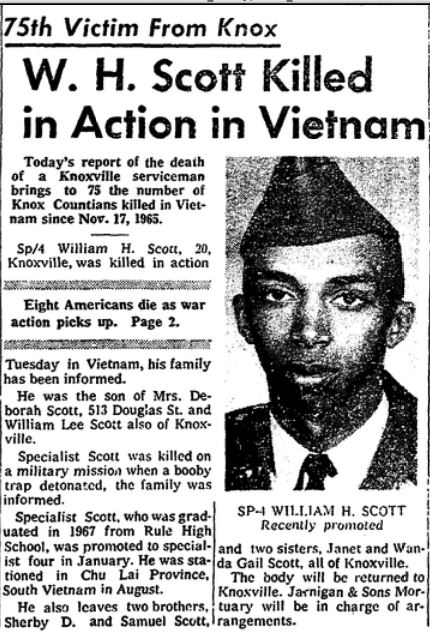 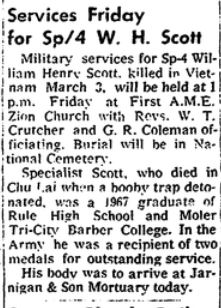