William Harrison Patrick served aboard the USS Canopus (AS-9). submarine tender assigned to the submarine squadron 20 stationed in the Philippine Islands. His ship, badly damaged by Japanese bombers was scuttled and sunk in deep water April 9, 1942 during the invasion of the Philippine Islands by the Japanese invading armed force. He was evacuated to the Island of Corregidor ‘The Rock’, located across the bay from Manila and served in the 4th Marine Regiment, 4th Battalion reserves (provisional) and fought gallantly during the final battle for the Island fortress. Captured May 6, 1942, the day that General Wainwright was forced to surrender Corregidor to the Japanese. Transferred to the Mainland by barge and interned at the prisoner of war camp Los Banos, Lagune, Luzon. On October 11, 1944 he boarded the Japanese ‘Hell Ship’,  the Arisan Maru destined for, Japan which was torpedoed and sunk by the submarine, USS Shark October 24, 1944. He was reported as buried at sea and is memorialized at the Manila American Cemetery, Philippines. 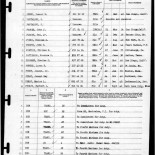