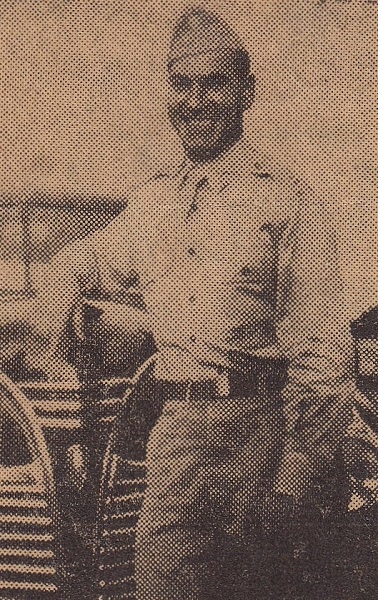 Capt. William H. Lansdon was killed in a car accident in Minnesota. The obituary is from a Boise, Idaho newspaper:

Landson Rite Will Be Today Funeral service for Capt. William Lansdon, a former resident of Boise, will be conducted today at 10 a.m. at St. Michael’s Cathedral. The Rt. Rev. Frank A. Rhea, bishop of Idaho, will officiate. Burial will be in Morris Hill cemetery. Details of the accident in which Capt. Lansdon was killed near Little Falls, Minn., last Saturday morning were received Thursday by relatives as the body arrived from Camp Ripley, Minn., where Capt. Lansdon was commander of a military police company and where military rites were conducted for the officer. Capt. Lansdon was driving through a storm. Wet weather brought thousands of frogs onto the highway. The surface became slippery. The car skidded, overturned three times, and threw Capt. Lansdon clear. He was killed instantly. Pallbearers will be alumni of Phi Delta Theta, the officer’s college fraternity.