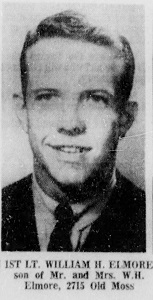 1st Lieutenant William Herschel Elmore, Jr. was born on February 3, 1944, and was originally from San Antonio, Texas. He served his country in the Vietnam War in the United States Marine Corps, as a pilot (HMH/M/L/A) in HMM-363, MAG-16, 1st MAW. He was a six-year veteran of the Marines when he began his tour in Vietnam. On September 2, 1966, 1st Lt. Elmore was aboard a helicopter that crashed under non-hostile conditions in Quang Nam province, South Vietnam; he was 23 years old at the time of his death. 1st Lt. Elmore is memorialized on the Vietnam Veterans Memorial on Panel 25E, Line 82.

This U.S. Marine Corps helicopter had a mid-air collision at night with a UH-1 over Da Nang. Their main rotor blades contacted the skids of the UH-1 causing the loss of one or more blades at a fairly high altitude. The H-34 fell into a rice paddy near ‘Charley Med’ just west of the Da Nang airfield complex, killing pilots CAPT Johnnie L. Garner and 1LT William H. Elmore Jr., crew chief Clarence M. Gunther Jr., and gunner LCP William J. McGee IV. The crew of the UH-1 were not hurt and landed safely. Reported by Dermod F. Jerry Norton, HMM-363. [Taken from vhpa.org]