South Harriman High School, class of 1943.
He was at the D-Day landing 6 June 1944 and fought for 17 days before he was wounded. He died in France.
His brother, Lewis Goldston, SHHS class of 1940, served in the Army Air Forces. In addition to Lewis Goldston USAAF, Bill had three other brothers serve in World War II: Layton Goldston US Army, Jack Goldston US Navy, and Glen Goldston USMC. Their father, Alexander Goldston, served in Cuba during the Spanish American War. 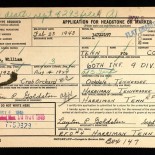