Corporal William Earl Goodrum was a member of Company D, 1st Battalion, 9th Infantry Regiment, 2nd Infantry Division. He was taken Prisoner of War while fighting the enemy in South Korea on February 11, 1951 and died while a prisoner on March 31, 1951. His remains were not recovered. 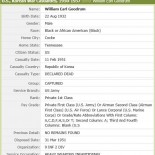