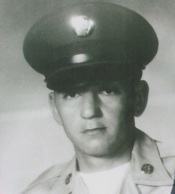 Private First Class William Earl Bridges, Jr. was born on March 23, 1943, and was originally from Lenoir City, Tennessee. He was the son of Mr. and Mrs. Earl Bridges, Sr., and had four siblings, including sisters Linda and Terry, and brothers David and Jimmy. He served his country in the Vietnam War in the United States Army, as an infantryman in C Company, 3rd Battalion, 8th Infantry, 4th Infantry Division. His tour in Vietnam began on August 21, 1967. On December 22, 1967, PFC Bridges was killed in Kontum province, South Vietnam , from a tragic accident in which a brush fire spread to an ammunitions dump, causing several bullets to discharge into the area. He was 24 years old at the time of his death. PFC Bridges is buried at Hickory Creek Cemetery, also known as Mt. Pleasant Baptist Church Cemetery, Knox County, Tennessee, and is memorialized on the Vietnam Veterans Memorial on Panel 32E, Line 42. The following are excerpts from the Knoxville News Sentinel regarding PFC Bridges:

William Earl Bridges Jr., 24, son of Mr. and Mrs. Bridges Sr., of Buttermilk Road, was killed Friday in an accident in his camp, the family was notified yesterday. Some brush around an ammunition dump caught fire, causing several rounds to discharge. The serviceman was hit by one of the fire-fired bulltes, it was reported.

Bridges had been in Vietnam four months. Before entering the Army, he attended Karns High School and was employed at Levi Strauss Co.

The body is being returned to Click Funeral Home, Lenoir City 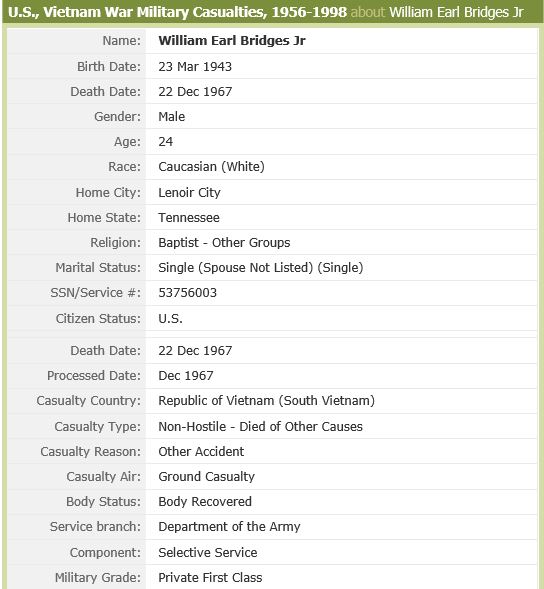