The Bristol Herald Courier, March 11, 1945
Staff Sergeant William Bernard Peters, son of Mr. And Mrs. C. B. Peters of 606 Holston avenue, and husband of the former Doris Wright of Greeneville, Tenn., was killed in action in Germany on February 25, according to the War Department.
Sgt Peters was born in Manhattan, Montana, October 31, 1922 but had lived in Bristol since early childhood. He was graduated from Tennessee high school in 1939 and was employed by the S.H. Kress  Company until he was inducted into the army November 16, 1942.
He was a member of the Tennessee State guard, a charter member of Sons of the Legion, and belonged to the Central Presbyterian church.
After basic training at Camp Adair, Oregon, Sgt Peters received further training at Camp Horne, Arizona and Camp Carson, Colorado before going overseas in September, 1944.
A member of Company A, 614th Infantry, known as Terry Allen’s  “Timber Wolves”,  he received the Purple Heart for wounds suffered in action in Holland October 31, 1944.
In addition to his widow and parents, he is survived by one daughter, Bernard Madonna; one sister, Phyllis Ann Peters of 606 Holston avenue, and one brother, Charles B. Peters, Jr. somewhere in Germany. 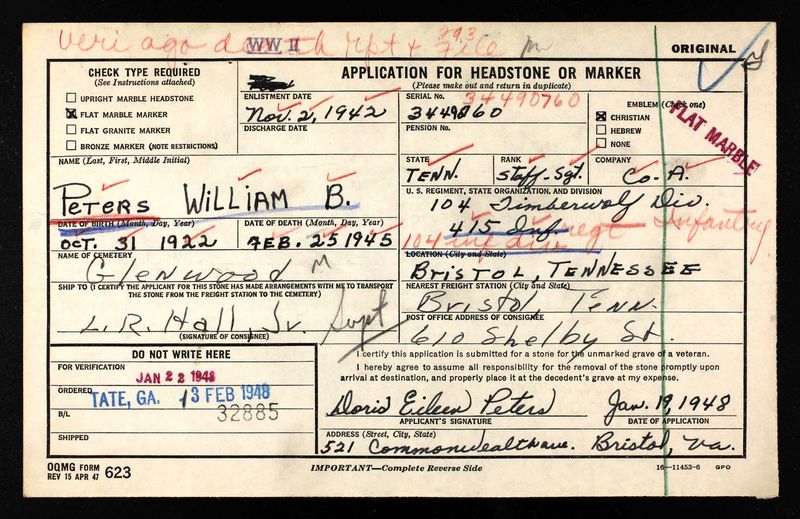