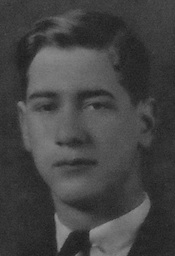 Captain William Bruce Davis was assigned to the 45th Infantry Regiment Phillippine Scouts. When war broke out on 7th of December 1941, the 45th fought against the Japanese invaders withdrawing to the Bataan Pennisula, where it finally surrendered on 9 April 1942.

Captain Davis was killed in action on 6 April 1942. He is remembered on the Tablets of the Missing at the Manila American Cemetery, Philippines.