William Andrew Jackson Jones was born in Ernestville, Unicoi County, Tennessee on 18 May 1889. He was living in nearby Kittyton (now extinct) near Flag Pond, also in Unicoi County, when he enlisted in the North Carolina (NC) Army National Guard in Asheville, Buncombe County, North Carolina on 1 June 1917. William was assigned to Company F, 1st NC Infantry Regiment.

On 25 July 1917, the President called the National Guard into Federal Service. The 1st NC Infantry Regiment was dispatched to Camp Sevier, Greenville, South Carolina on 31 August for training. After the establishment of the 30th “Old Hickory” Division on 12 September 1917, William was reassigned to Company D, 105th Ammunition Train, 55th Field Artillery Brigade, 30th Division on 24 October 1917. He was promoted to Private First Class on 19 February 1918.

The 105th Ammunition Train left Camp Sevier on 21 May 1918 via the railroad and arrived Camp Mills, Long Island, New York on 23 May. There they were outfitted with new uniforms, weapons and equipment they would need in France. They departed Camp Mills again via train on 25 May en-route to Montreal, Canada where they boarded His Majesty’s Transport (HMT) Port Lincoln on 26 May. William and the 105th sailed the next day on 27 May for Halifax, Nova Scotia and arrived on 31 May to meet up with 13 other ships that were to make-up their convoy.

The convoy departed Halifax on 1 June 1918 for Liverpool, England and arrived there safely on 12 June after surviving a severe storm and a German U-Boat (submarine) attack. William and the men of the 105th Ammunition Train stayed onboard the ship until the next day when they boarded a train for Winchester. Once they arrived, they completed a seven mile march to Camp Windle Down where they were to be billeted and to await their transportation to France. They ate bread and cheese for the next seven days.

On 20 June, William and the 105th marched back to Winchester and boarded another train this time for Southampton on the southern coast of England. They embarked the same day on HMT Antrim and crossed the English Channel to Le Harve, France, they arrived on 21 June. Again they were on foot and hiked five miles, all uphill through what was called a veritable sea of mud to a camp where they stayed the night. At this time the 55th Field Artillery Brigade was detached from the 30th Division for training and certification with the French Army.

The next day (22 June) the 105th left Le Harve en-route to their training camp. On 23 June, they arrived Guer, Morbihan, Brittany and again marched in full packs to nearby Camp Coetquidan. Camp Coetquidan was originally established as a training camp for Napoleon Bonaparte’s troops. William and the men of the 105th lived in barracks that were built to house those troops many years ago in the early 1800s. When the 105th were not being reviewed by French high ranking officers, they were doing their wartime tasking and delivering ammunition to their 113th, 114th and 115th Field Artillery Regiments, also of the 55th Field Artillery Brigade, who were working day and night to qualify for combat service.

William died from an accidental gunshot wound on 5 July 1918 at the United States (US) Army’s Camp Hospital #15 on Camp Coetquidan. He was interred at the camp’s cemetery (US Military Cemetery #19) with full military honors. William was disinterred in December 1921 and moved to Antwerp, Belgium where he sailed on 28 December 1921 aboard the US Army Transport (USAT) Crook. The Crook arrived Pier #2 in Brooklyn, New York on 14 January 1922. After a Memorial Service was conducted at Pier #2, his journey home continued with a US Army soldier as his escort. William was finally laid to rest in the Mountain Home National Cemetery, Mountain Home, Tennessee again with full military honors on 7 February 1922 in Section G, Row 13, Site 3.

Note 1: It is unclear as to where the middle initial of A for William began, but most likely when he entered service in 1917. The 1910 census show’s a J and the Veterans Administration Record Card states Jackson. It is possible that it’s both and he was named after his mother’s father Andrew Jackson Edwards.

Note 2: For further exploits of the men to include rosters and group photos who served in the above units, please check out: History of the Fifty-Fifth Field Artillery by William J. Bacon, first published 1920 in Memphis, Tennessee. The above on the 105th Ammunition Train, up to William’s death was taken from it. 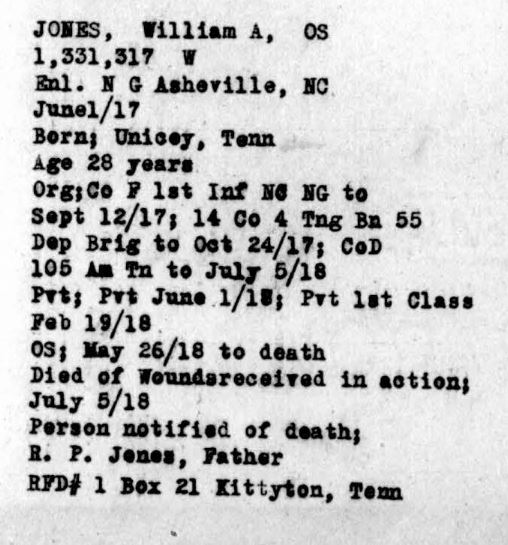