William A. Cook was the son of Sarah Margaret Barnes. His mother married with William Alfred Fullen in 1920.

The Greeneville Sun, January 12, 1945
William A. Cook, aged 39, U.S. Army, died yesterday morning at six o’clock in the goverment hospital in Atlanta, Ga., relatives here have been notified. The body will arrive on No. 4 in the morning and will be taken to the Bible-Gray Funeral Home in Mosheim and later to the home of his mother, Mrs. W. A Fuller of near Mt. Carmel. Particulars as to his death have not been learned. He had been in the service more than a year and was home on furlough a short time ago. William A. Cook became ill six months after beginning his military training and had been in the hospital most of the time since then. Funeral arrangements have not been completed but the service will be held at Price’s Cemetery. Besides his mother, he is survived by his step-father, one sister, Mrs. Willie Warner of Romeo, two brothers, Grover Cook, of the U.S. Navy, whereabouts unknown, Clarence of Indiana and two half-brothers, Kenneth Fuller, a patient in the Kennedy General Hospital in Memphis and Alfred Fuller, somewhere in the Pacific. 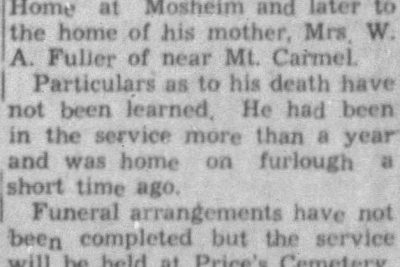