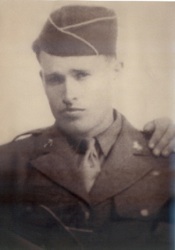 He was involved in an offensive move across Italy, saw action at Sicily and Anzio, and was killed in fierce fighting March 11, 1944. He was buried at the U.S. Military Cemetery, Nettuno, Italy. Three years later his body was returned home and buried in the family cemetery at Manson, TN.