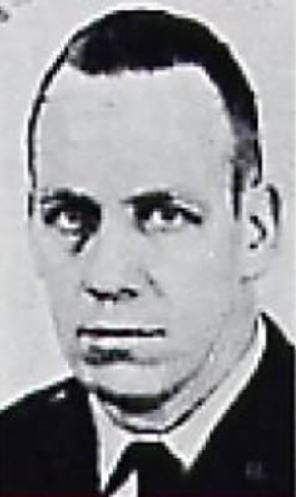 Major Willard George Palm was a crew member of a RB47 Stratojet reconnaissance aircraft with the U.S. Air Force. On July 1, 1960, while patrolling the airspace during the Korean truce, his aircraft was shot down.

On July 1, 1960, a U.S. Air Force RB-47 aircraft with a crew of six was shot down over the Barents Sea. Captains John McKone and Freeman Olmstead were rescued by a Soviet trawler and held captive at Lubyanka prison until January 25, 1961 when they were released. The remains of one crewman, Willard Palm, were recovered and returned July 25, 1960. The other three crewman: Oscar Goforth, Dean Phillips, and Eugene Posa, remain missing in action.

He was killed-in-action on July 1, 1960 while aboard an Air Force RB-47 on a routine mapping flight over the Barents Sea, 30 miles outside of USSR airspace. Six men were aboard the aircraft, but the Soviets only returned Palm’s body. A victim of the “Cold War,” he was buried in Section 3, Site 2508 of Arlington National Cemetery.

On July 1, 1960, a Soviet MiG fighter north of Murmansk in the Barents Sea shot down a six-man RB-47 crew. Two young United States Air Force officers survived and were imprisoned in Moscow’s dreaded Lubyanka prison. Captains McKone and Olmstead were accused by the Russians of espionage, punishable by death, for allegedly violating the Soviet Sea frontier, although their plane had been many miles away from it at all times. They managed, however, to resist all Soviet efforts to obtain “confessions” through cajolery, trickery and threats of death, and were finally and unexpectedly released after seven months of imprisonment.

The Soviet Union had a history of shadowing, escorting and occasionally shooting down American planes flying over international waters near its borders; in the 10 years between 1950 and 1960, about 75 US Navy and Air Force air crewmen in 10 separate incidents lost their lives flying routine reconnaissance missions.

The planned route of the flight took the plane northward from England over international waters where the plane turned east and entered the Barents Sea northeast of Norway and continued a track in international waters approximately 50 miles from the Soviet Kola Peninsula. While the RB-47H was conducting its reconnaissance mission, a Soviet MiG-19 fighter assigned to the 206th Air Division based at Murmansk paralleled the USAF plane at a distance. The MiG fighter then turned towards the RB-47 on an intercept course, but passed about 3 miles behind it. The radar course plotted by Capt. McKone called for a turn to the northeast at about 50 miles off Holy Nose Cape at the bottom of the Kola Peninsula; however, the Soviet MiG had returned and was now flying in close formation (40 feet) off the right wing of the RB-47. As the RB-47 (flying at 30,000 feet and 425 knots) started its turn to the left, the MiG (piloted by Vasily Polyakov) broke right towards the Soviet shoreline (away from the RB-47), turned back towards the USAF plane and started shooting. Capt. Olmstead immediately returned fire, but the RB-47 was no match for the nimble MiG and after a brief fight, the RB-47 was shot down about 6 P.M. (local time) over international waters in the Barents Sea.

The MiG shot up the left wing, engines and fuselage in its initial firing pass causing the RB-47 to enter a spin which Major Palm and Captain Olmstead were able to pull out of; however, the MiG made a second firing pass at the plane and finished the job. Major Palm and Captain Olmstead attempted to save the plane once again, but the damage was to serious and the bail out order was given.

At least three of the six crewmen managed to eject from the stricken plane – Captains Olmstead & McKone and Major Palm. The three reconnaissance officers (Ravens) seated in the converted bomb bay of the plane were (probably) unable to get out of the spinning plane. Major Palm apparently died of exposure in the frigid water, but Captains Olmstead and McKone were able to climb into their survival rafts and lasted long enough to be picked up by a Soviet fishing vessel after more than six hours in their tiny rafts. The US Air Force, unaware that the plane had been shot down – the Soviets did not release this information for more than a week – conducted a search for the missing plane and crew from July 2nd to the 7th but no trace was found.

The United States and Soviet Union had a long history of conducting surveillance operations against each other and in most cases, the reconnaissance aircraft of one country was intercepted and escorted by the fighters of the other. Since the CIA U-2 piloted by Francis Gary Powers was shot down 1 May 1960 (on a Soviet National ‘Holiday’) over Sverdlovsk, USSR, the Soviets were particularly sensitive about US aircraft conducting flights over Soviet territory. President Eisenhower pledged to end the over flights, but the Soviet Air Force was under fairly intense internal pressure to protect its territory. The MiG pilot later indicated that the combination of this internal pressure and his belief that the USAF plane was headed for a secret naval base unknown to the USAF crew actually) resulted in the shoot down of the RB-47H even though it was over international waters in international airspace.

Within days, Olmstead and McKone were sent to the Lubyanka prison in Moscow and held in separate cells while undergoing interrogation. The situation was possibly worsened by the fact that as military personnel, Olmstead and McKone were not required to give any more information than name, rank and service number (in accordance with the Geneva Conventions). Mr. Powers, as a CIA pilot was not bound or protected by the Geneva Convention and the CIA briefed their pilots not to withhold information if forced or shot down over Soviet territory. Mr. Powers acted properly given his instructions, but the USAF pilots may have suffered because they were bound by a different set of standards and were basically instructed not to reveal any information which might have been useful to the Soviets. The Captains were not tortured but were interrogated at length nearly every day. Gradually, the Soviets allowed a limited amount of mail to flow to and from family members; however, the prison mail censors and interrogators continually tried to get the men to indicate regret for the mission and to agree that the United States should cease similar reconnaissance missions. The USAF officers resisted all attempts to by the Soviets to get the “confessions” they sought as part of the pretrial “investigation”.

On 24 January 1961, after almost seven months as prisoners, Captain Olmstead and Captain McKone were released never having been brought to trial. They never confessed to any wrongdoing and the Soviet espionage case was essentially groundless so the Soviets absolved them of any “criminal responsibility”. Major Palm’s body was returned to the United States about a month after his plane was shot down and buried with full military honors in Arlington National Cemetery, Washington, D.C. The bodies of the three reconnaissance officers were never found. 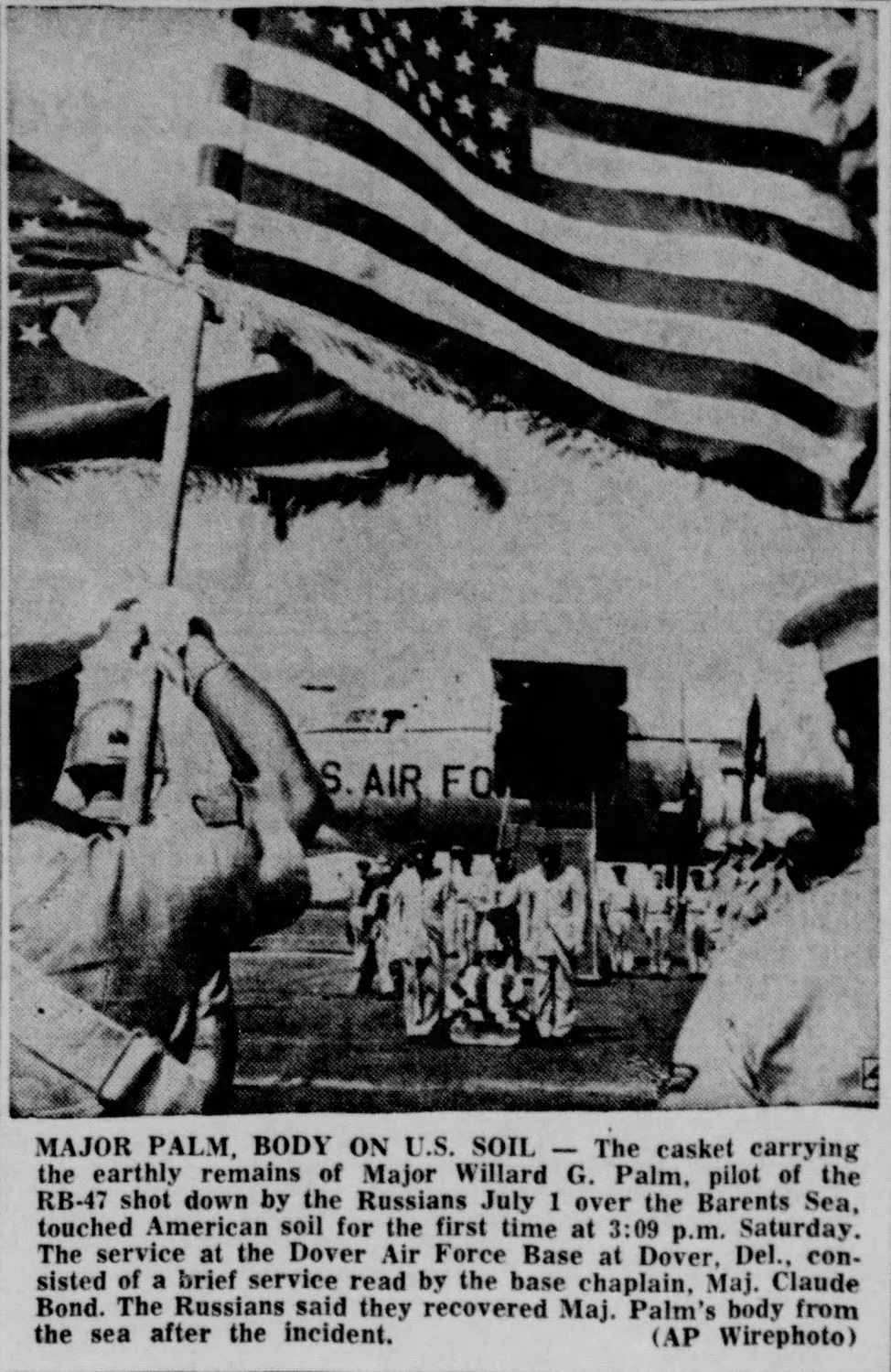 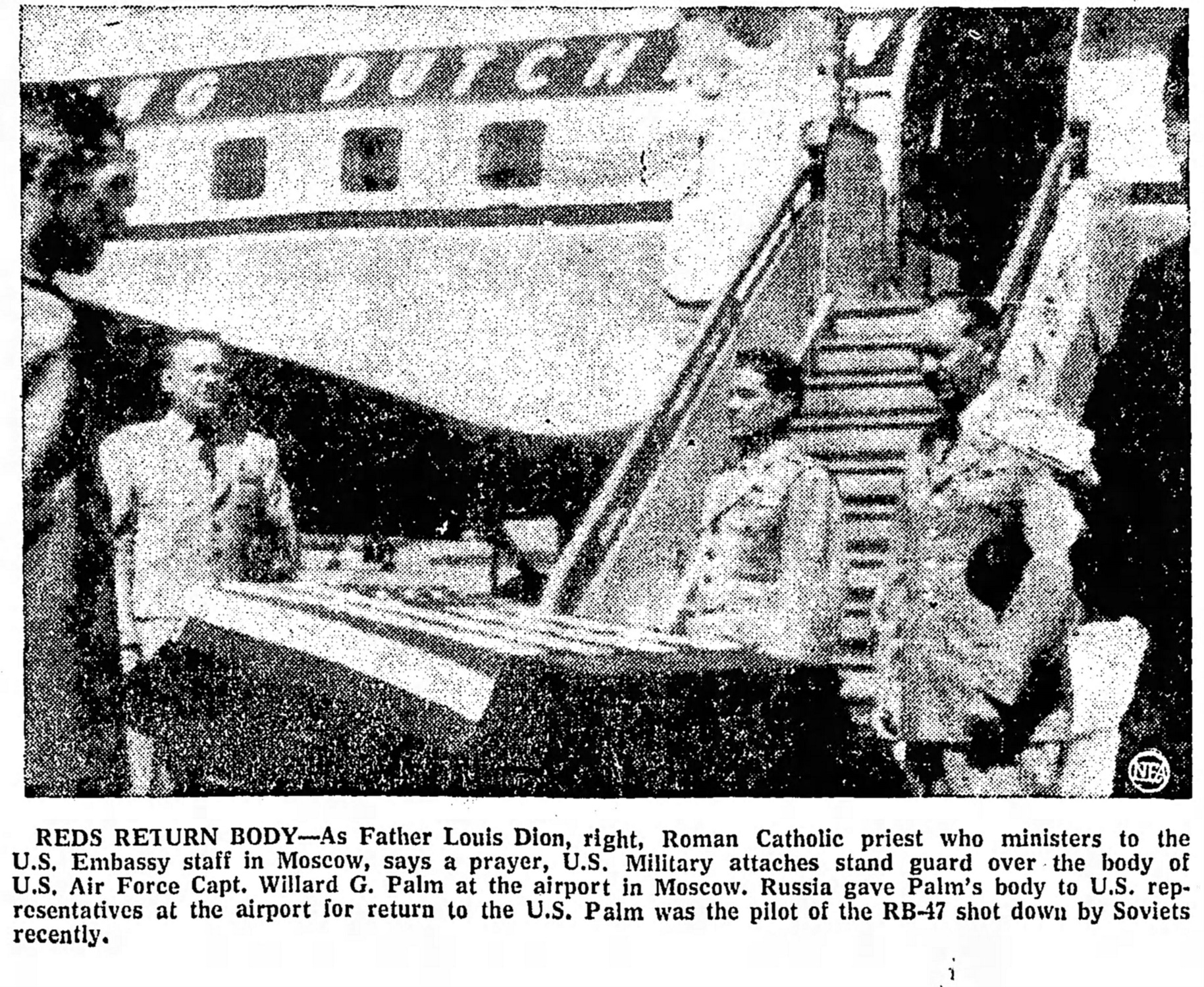 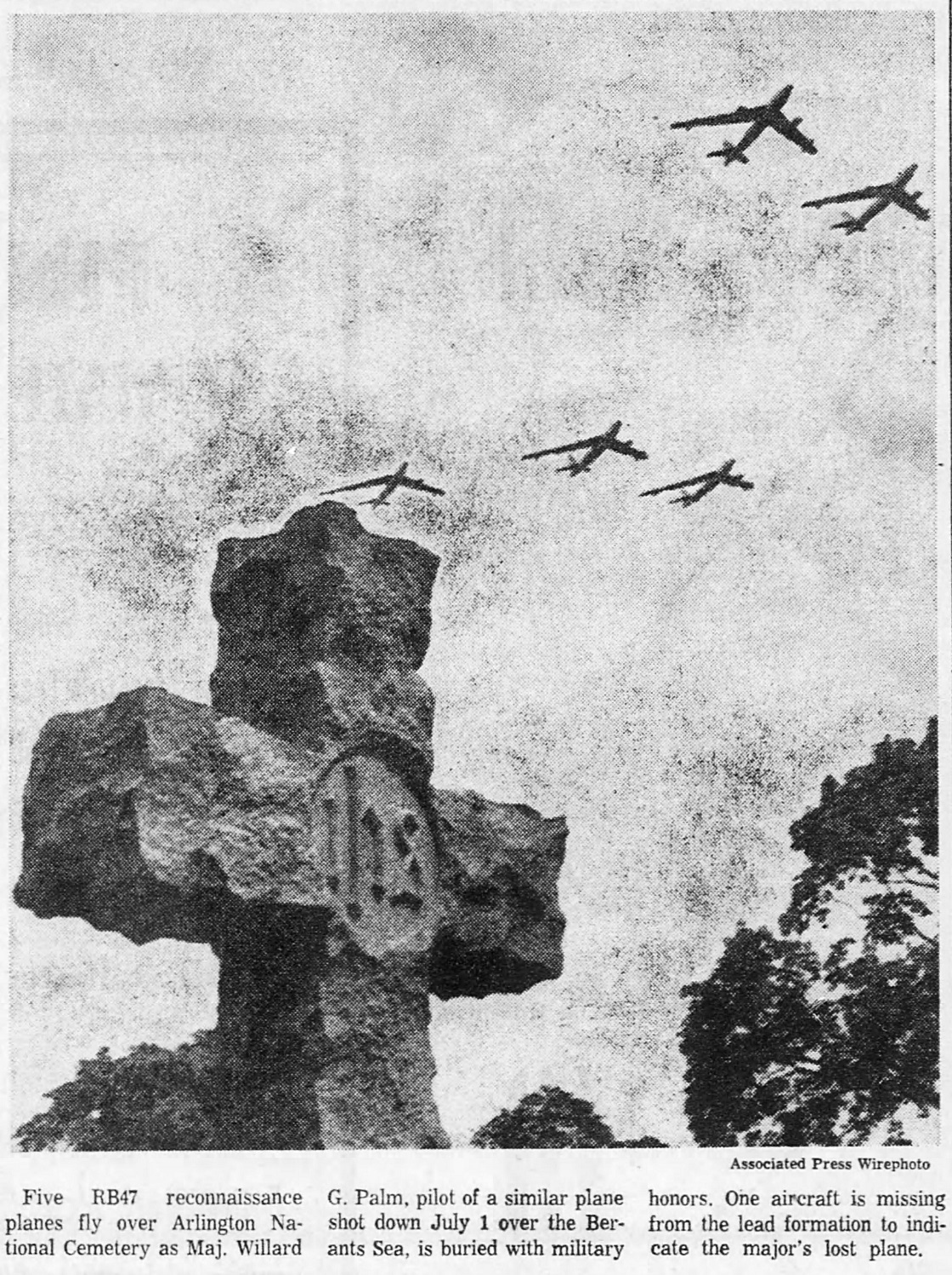 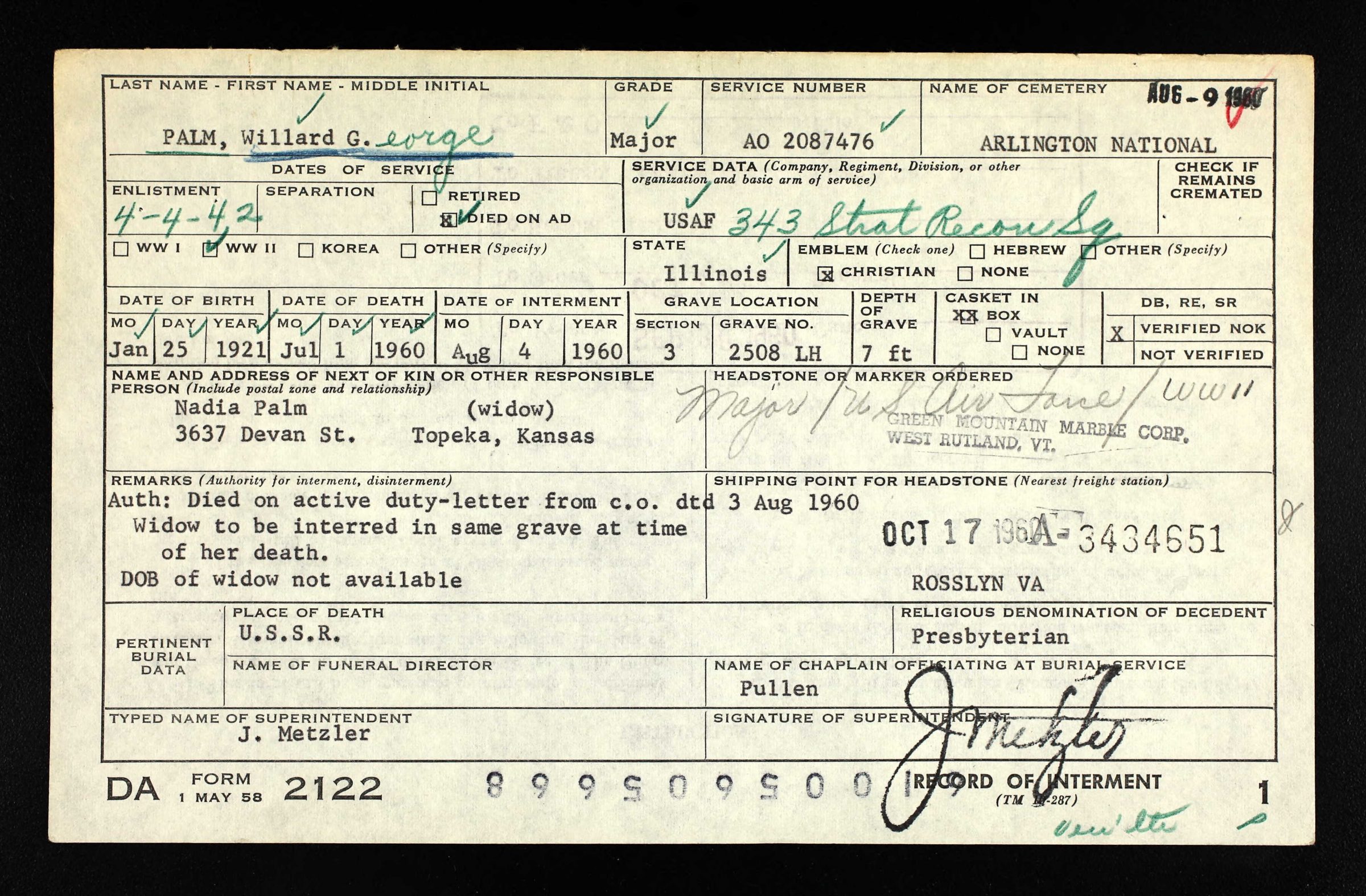 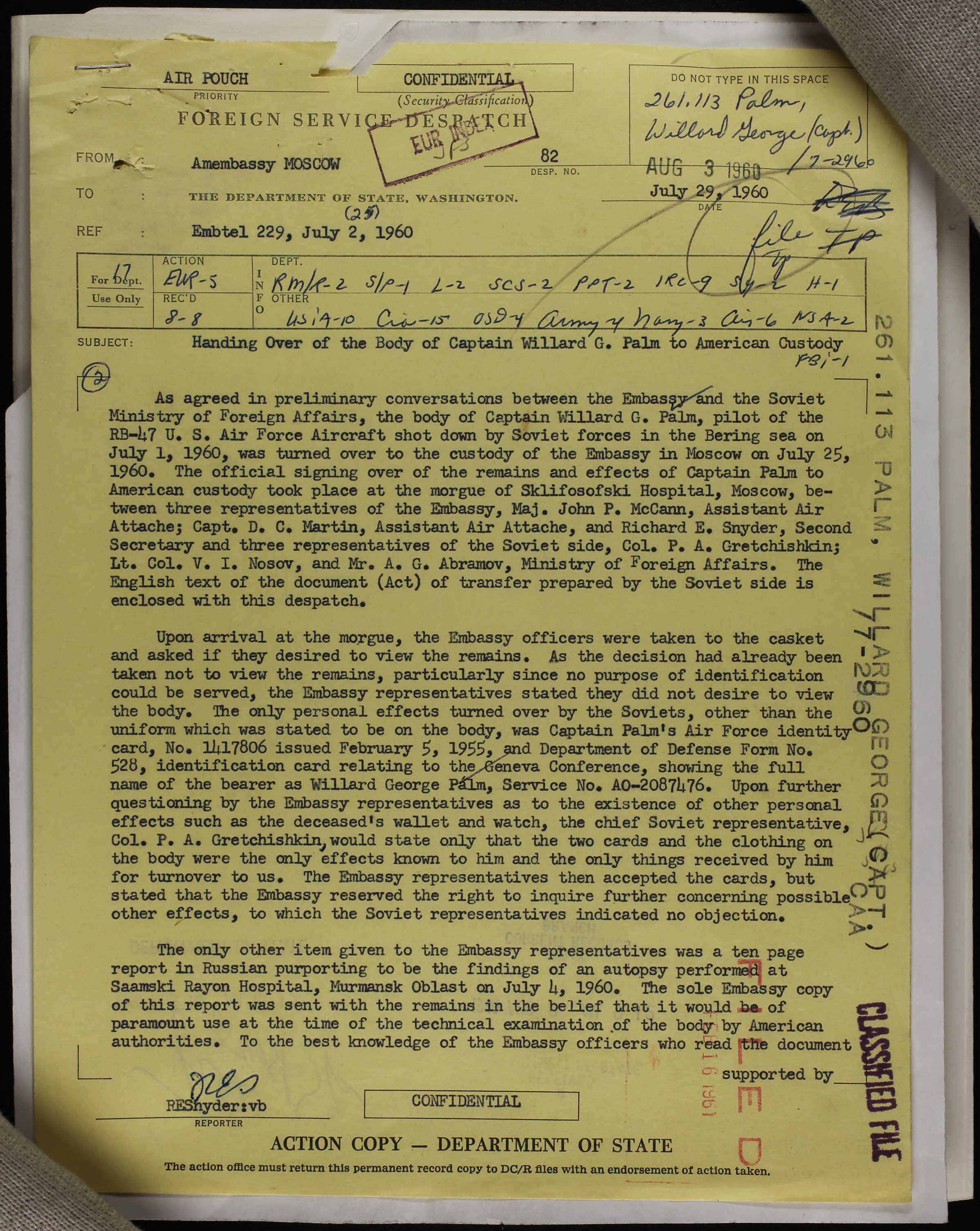 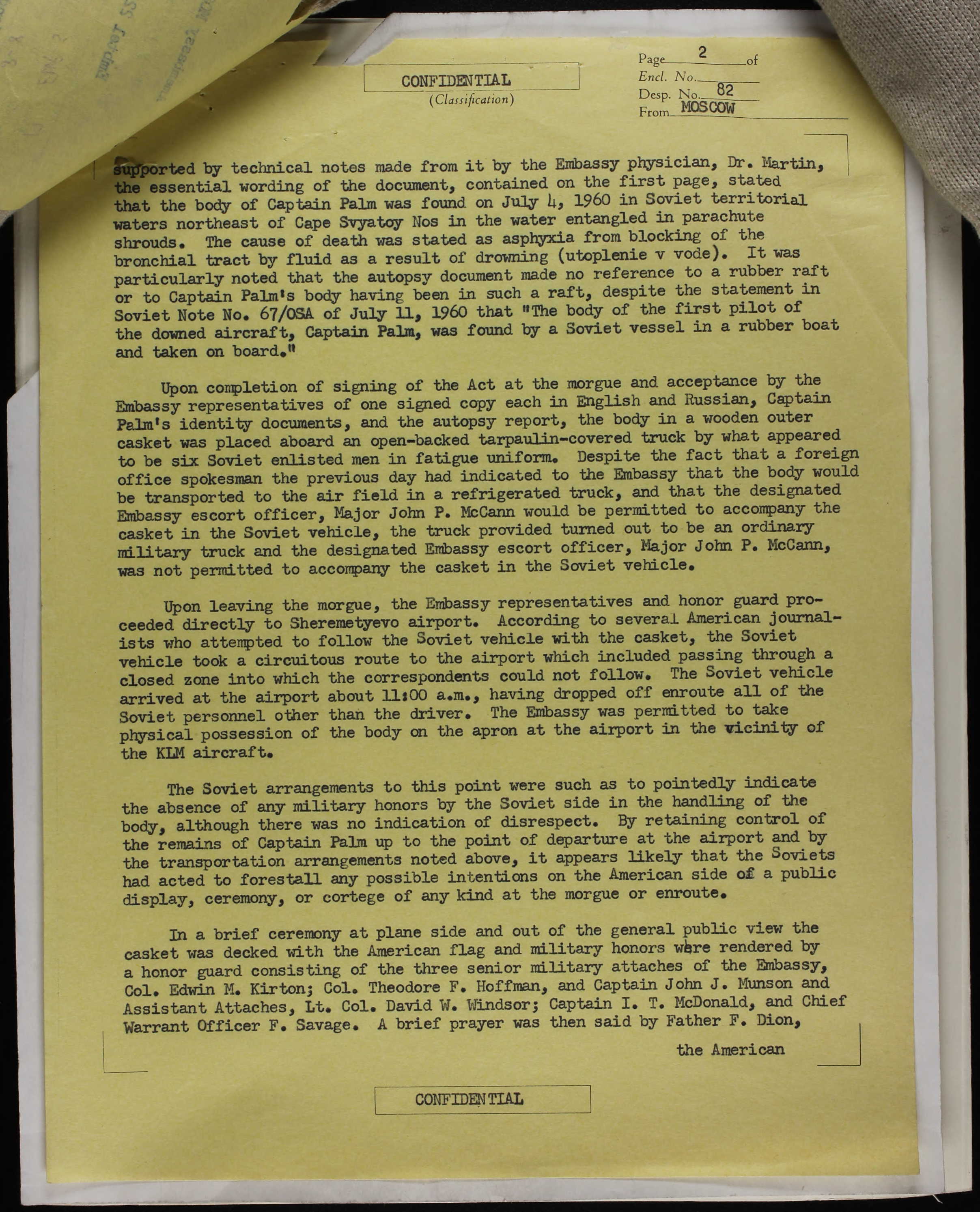 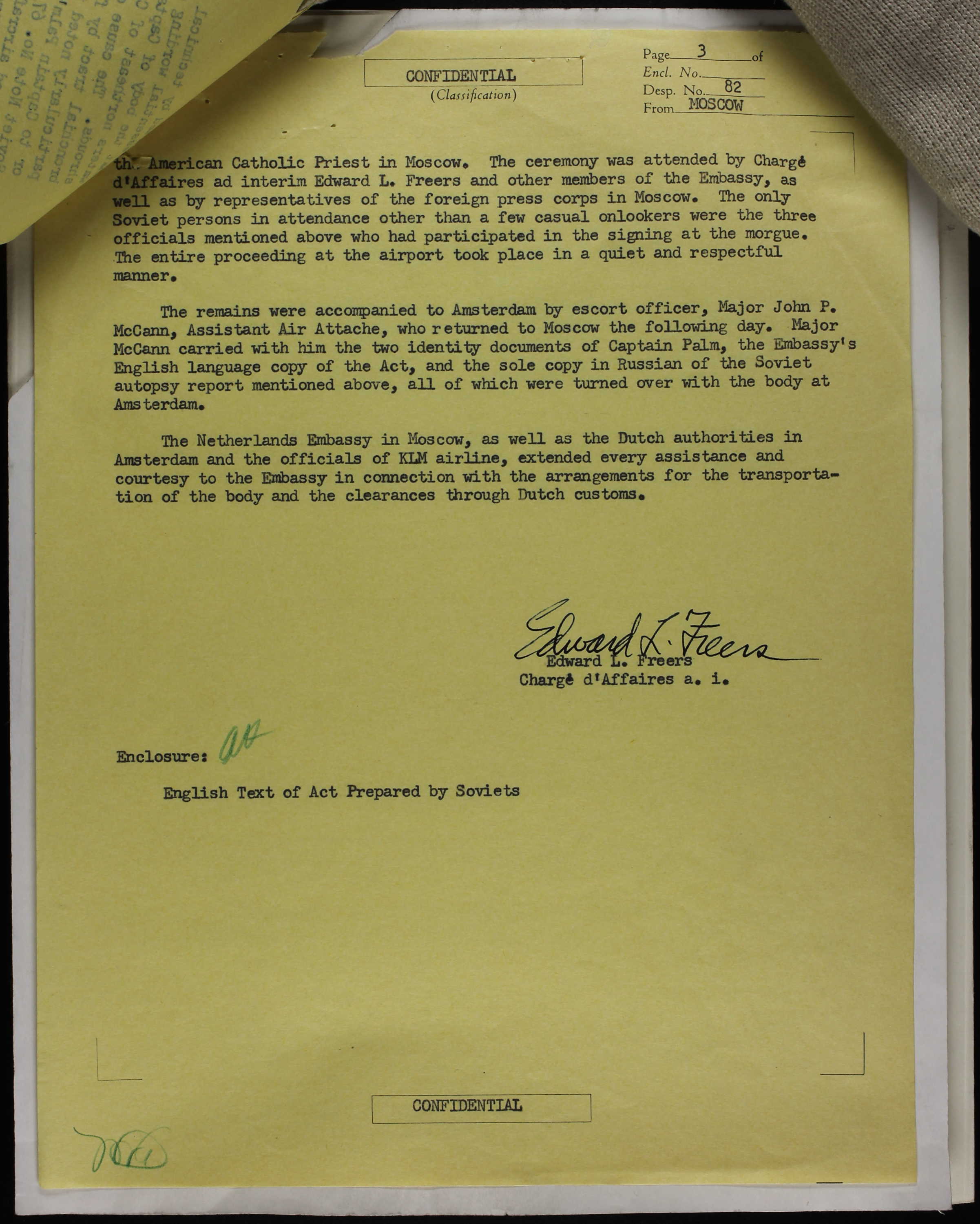 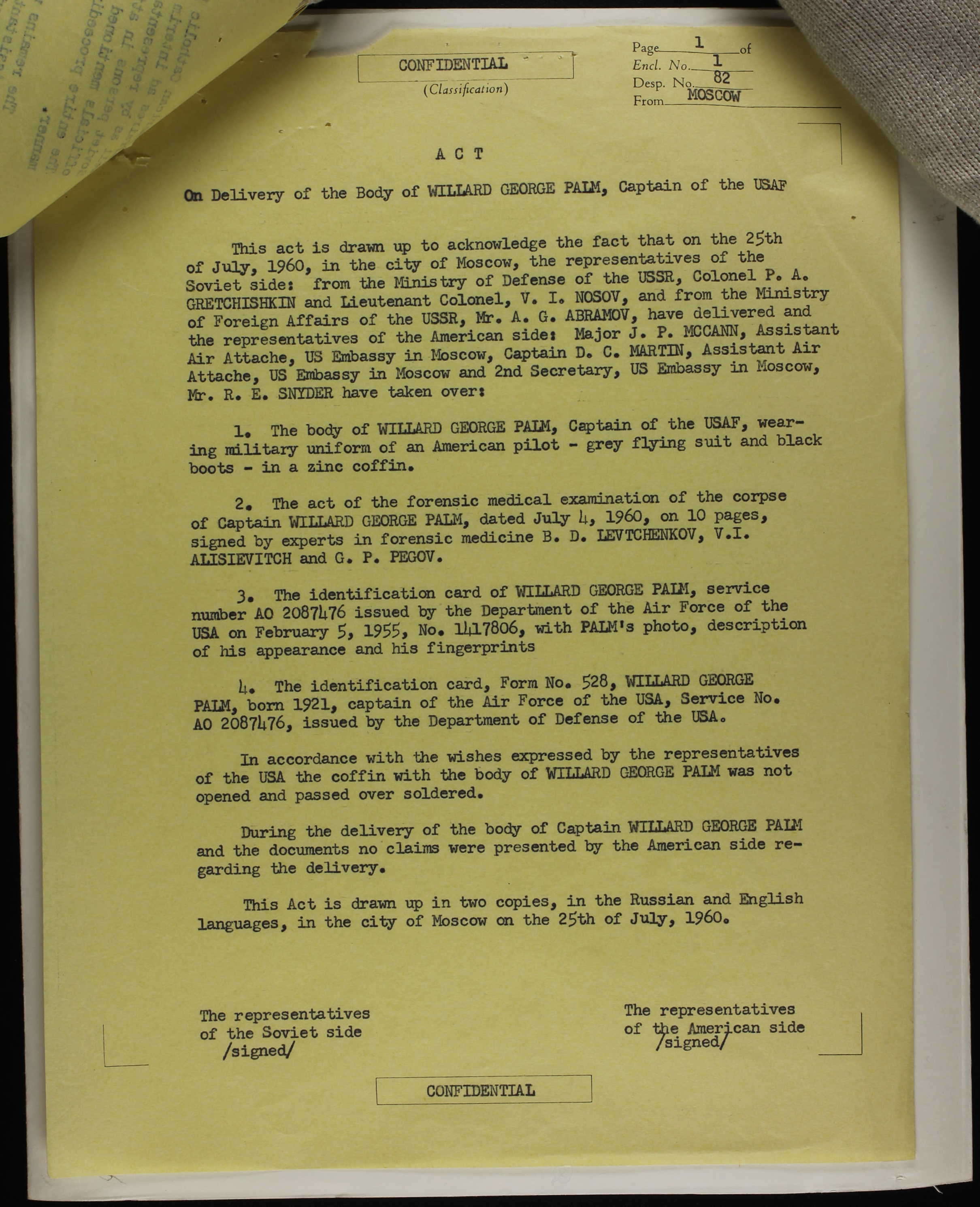 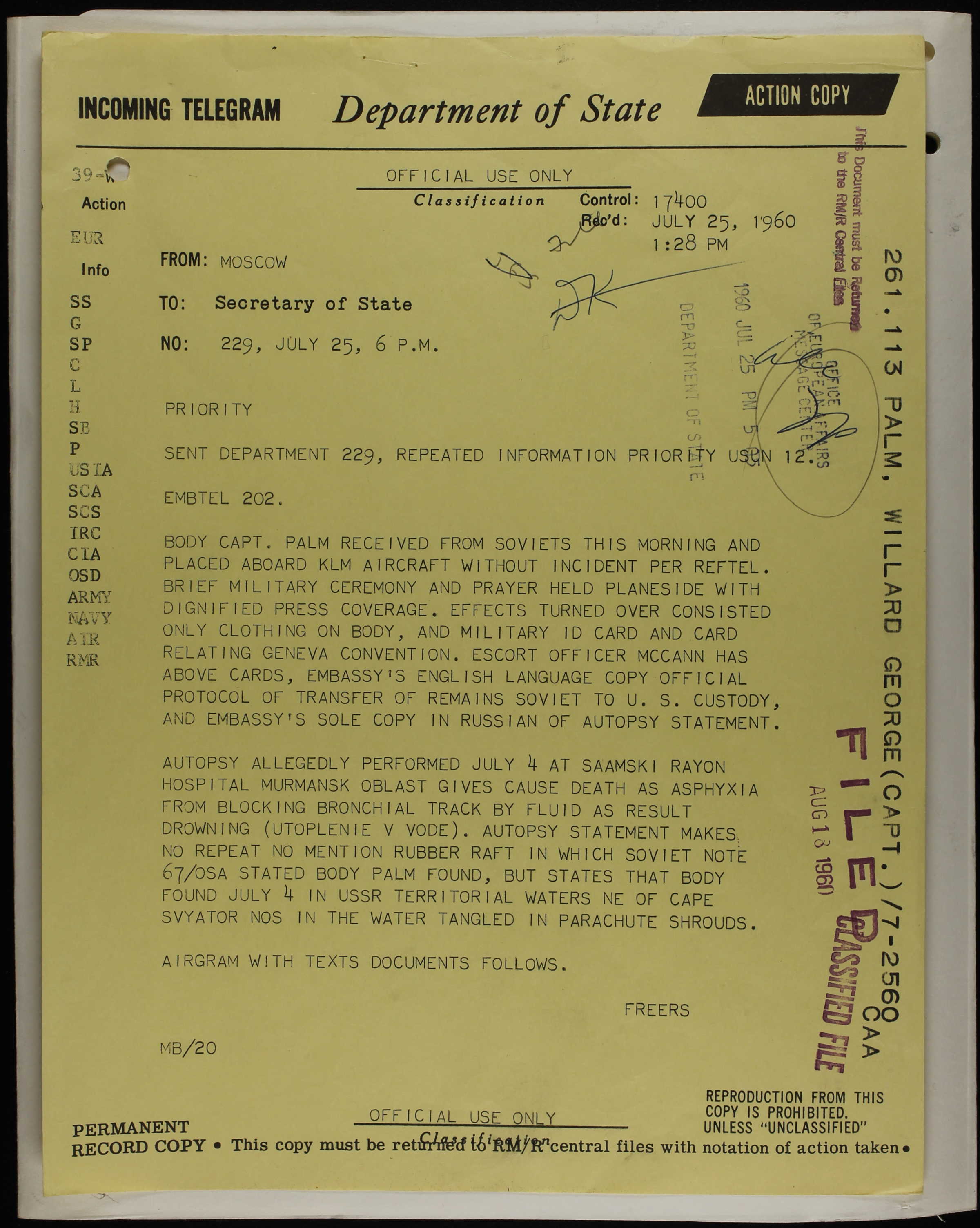