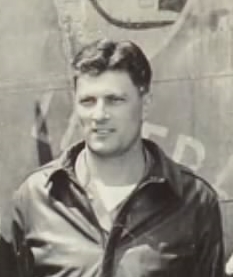 Wiley was my uncle (dad’s brother) that dad missed so much after
Wiley was killed.
–Submitted by John Rader

My Uncle, Don Moody, was a crew member with Wiley Rader and was killed in the same plane crash on October 26, 1944. Don Moody is the 4th from the left in the second row of the photo. He was the tail gunner.
–Submitted by Don Swain