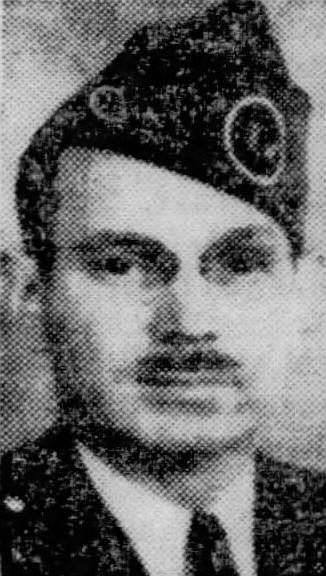 Major Wendell Fleet Swanson served as a physician with Headquarters, Philippine Department, United States Army, Philippines, and cared/treated the wounded American’s and Filipino’s who fought against the Japanese Army who had invaded the Philippines on December 8, 1941. During the battle, Maj. Swanson performed his duties as he pledged to do under the Hippocratic Oath. After Bataan and Corregidor fell to the Japanese, Maj. Swanson and those in his care were captured. It is assumed that he participated in the famous Bataan Death March to Camp O’Donnell. From there he was sent to Cabanatuan Prisoner of War(POW)Camp #1, where he remained most of his time as a POW. He then was sent to Bilibid Prison in Manila. From there he reportedly was sent aboard the Oryoku Maru on December 13, 1944, which was attacked by American planes on December 15th while anchored off Corregidor. It was bombed, strafed and badly damaged, and returned to Subic Bay. The POWs were forced to leap off the vessel into the water and were interred at a tennis court.On the morning of Dec. 20, 1944, 500 POWs from the tennis court were taken to San Fernando, province of Pampanga, in the center of Luzon Island. The remaining POw’s left Dec. 21st. This information was obtained from captured Japanese documents. While the POW transport ship did in fact get bombed while transporting prisoners, including Maj. Swanson, that was not how he died, even though it was widely distributed that was his cause of death.According to information on documents used in the trial of several Japanese soldiers after the war (GENERAL HEADQUARTERS SUPREME COMMANDER FOR THE ALLIED POWERS LEGAL SECTION, APO500, 25 Feb. 1947, File No. 014.13, Public Relations Informational Summary No. 510 – Subject: U.S. vs Junsaburo TOSHINO, Shusuke WADA,et.al), Maj. Swanson actually was murdered by the Japanese along with other Allied POW’s as reported below. Some of the incidents dates and dates of death noted in this report however, may not be 100% correct but are accurate within a day or two:“On the morning of 20 December 1944, 500 of the men were taken to San Fernando, Pampanga, and the second group left on the 21st. The first group was placed in the provincial jail, and the second group in the movie house. While there, the prisoners were finally issued a canteen of rice. There was a spigot at the theater with running water and by keeping order everybody received enough water. Ample water was also available at the jail.About 1800 hours on 23 December, WADA came to the two group commanders and wanted the 15 sickest men to be selected for return to Manila for hospitalization. Among the group selected were Lieutenant Dwight D. Edison, Lieutenant John W. Elliot, Lieutenant Colonel Ulysses J.L. Peoples, Jr., Lieutenant Colonel Samuel W. Freeny, Pharmacists Mate 2/c Deenah R. McCurry, Second Lieutenant Hyman V. Sherman, Major Wendell F. Swanson and eight other unidentified American Prisoners of War. About 1900 hours, a truck was brought to where the group was waiting and the sick were driven in the truck to a small cemetery on the outskirts of San Fernando, Pampanga. When they arrived at the cemetery there were a group of soldiers who had dug a hole about 15 feet square. When the guards on the truck had dismounted, they took up positions by the hole. Two of the guards brought one of the prisoners to the hole. The POW’s were told to kneel at the edge of the hole and to take a position as though in prayer. The prisoners were brought to the hole and he was bayoneted and/or decapitated. This procedure was followed until all fifteen of the prisoners had either been bayoneted or decapitated. It is alleged that at this execution both WADA and TOSHINO were present, that they supervised and took part in it”.“Toshino” was Lt. Junsaboro Toshino. He was found guilty of murdering and/or supervising the murder of at least 16 men and was sentenced to death at Yokohama, Japan. Wada was Shusuke Wada, a civilian employee of the Japanese army (some sources say he was a sergeant in the army). He spoke English and served as an interpreter as well as commander of the guard when Lt. Toshino was unavailable. Wada, whose charges were the same as Lt. Toshino’s was found guilty of causing the deaths of numerous Allied POW’s by ‘neglecting to transmit to his superiors requests for adequate quarters, food, drinking water and medical attention'”. Wada was sentenced to Life Imprisonment at hard labor. Other guards received prison sentences or were acquitted.During the writing of this bio on Maj. Swanson, this writer received a message from a member of his family. According to family, they confirm that Maj. Swanson did not die on the Hellship but indeed was murdered. They state that in 1946 an eyewitness POW veteran who knew Maj. Swanson came to the home of the major’s sister, who then lived in South Knoxville, Tennessee, and told her of her brother’s fate. According to this former POW, Maj. Swanson had been wounded during battle, and afterwards imprisoned. While imprisoned (and probably getting little if any medical care, he became gravely ill. One day the Japanese gathered several of the sick in the prison camp and told them they were taking them to a hospital. Instead they were taken to a field, shot dead, and buried in a mass grave. Reportedly, an effort was made to locate this grave by the Army after the Philippines were liberated but to no avail. The exact location of this grave containing the remains of Maj. Swanson and his companions is known only to God, and no one on record is still searching.**NOTE – Maj Swanson’s grave marker states he died on 12/15/1944 which would mean he in all likelihood was a victim on the Japanese hell-ship, Oryoku Maru. However, testimony submitted by other POW’s show that Maj Swanson did not die on the Oryoku Maru but in fact, was murdered by the Japanese at the Fernando cemetery.

Major Swanson was part of the Oryoku Maru draft of 1621 POWs that left Manila on 13 Dec 44. The Oryoku Maru was repeatedly attacked by the US Navy from 14 Dec 44 – 15 Dec 44 in Subic Bay. The Japanese abandoned the vessel and ordered the prisoners ashore to a Tennis Court at the occupied US Navy Base. From there Major Swanson was transported by truck to San Fernando, Pampanga on 21 Dec 44. While at San Fernando, Pampanga the Japanese ordered American doctors to select several POWs for transport to Manila. These doctors selected Major Swanson.

On the evening of the 23rd these men were loaded on a truck and taken to the Campo Santo de San Fernando Cemetery (San Fernando Municipal Cemetery). One by one they were led from the truck and executed.

Major Swanson’s remains were located at the cemetery in December of 1945, identified, and re-buried in Manila. He was identified by his ID tags and dental records.
–Submitted by Mark Kelso 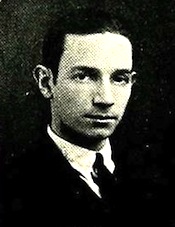 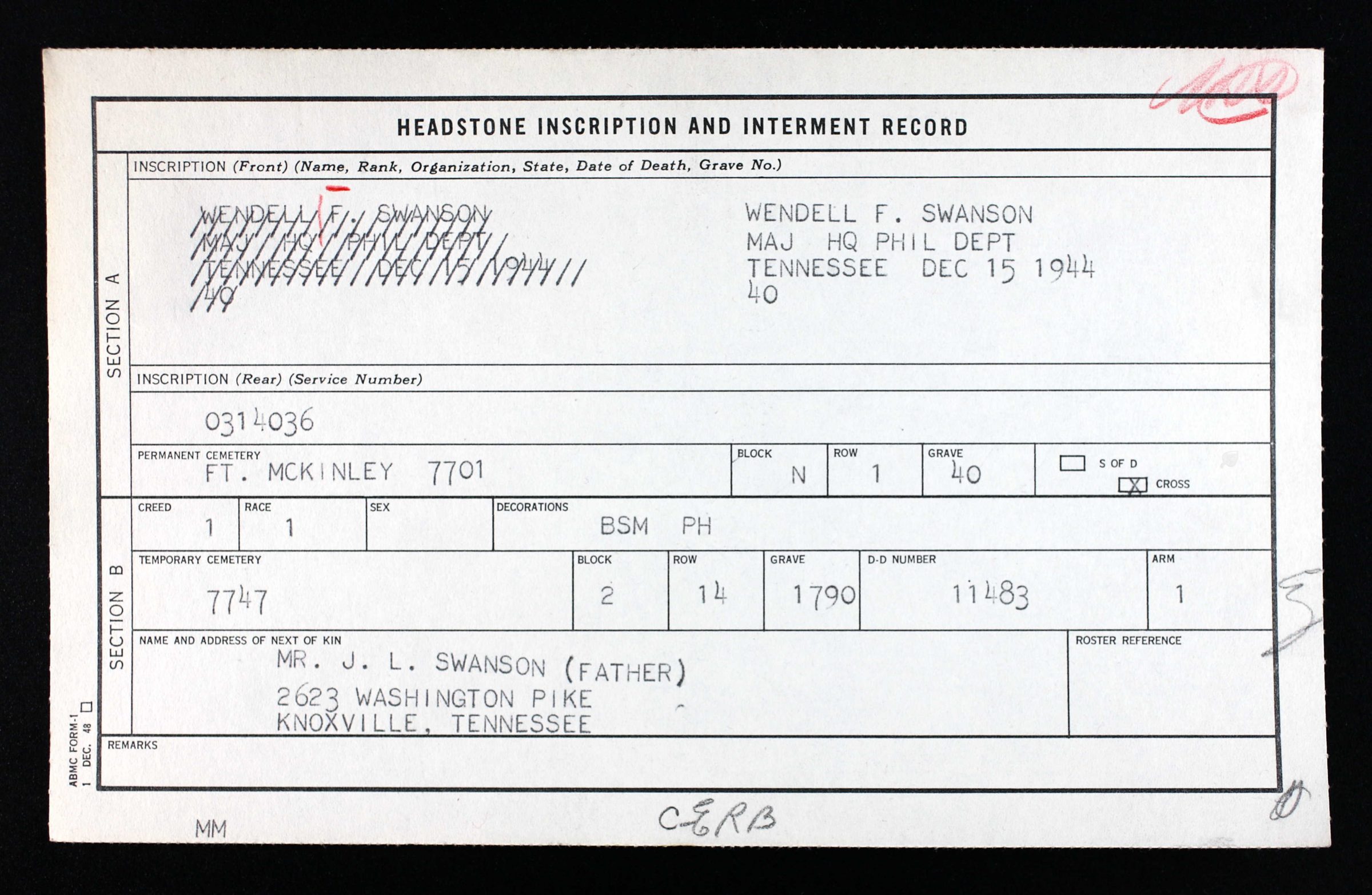 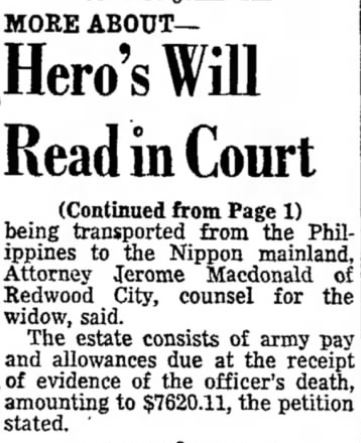 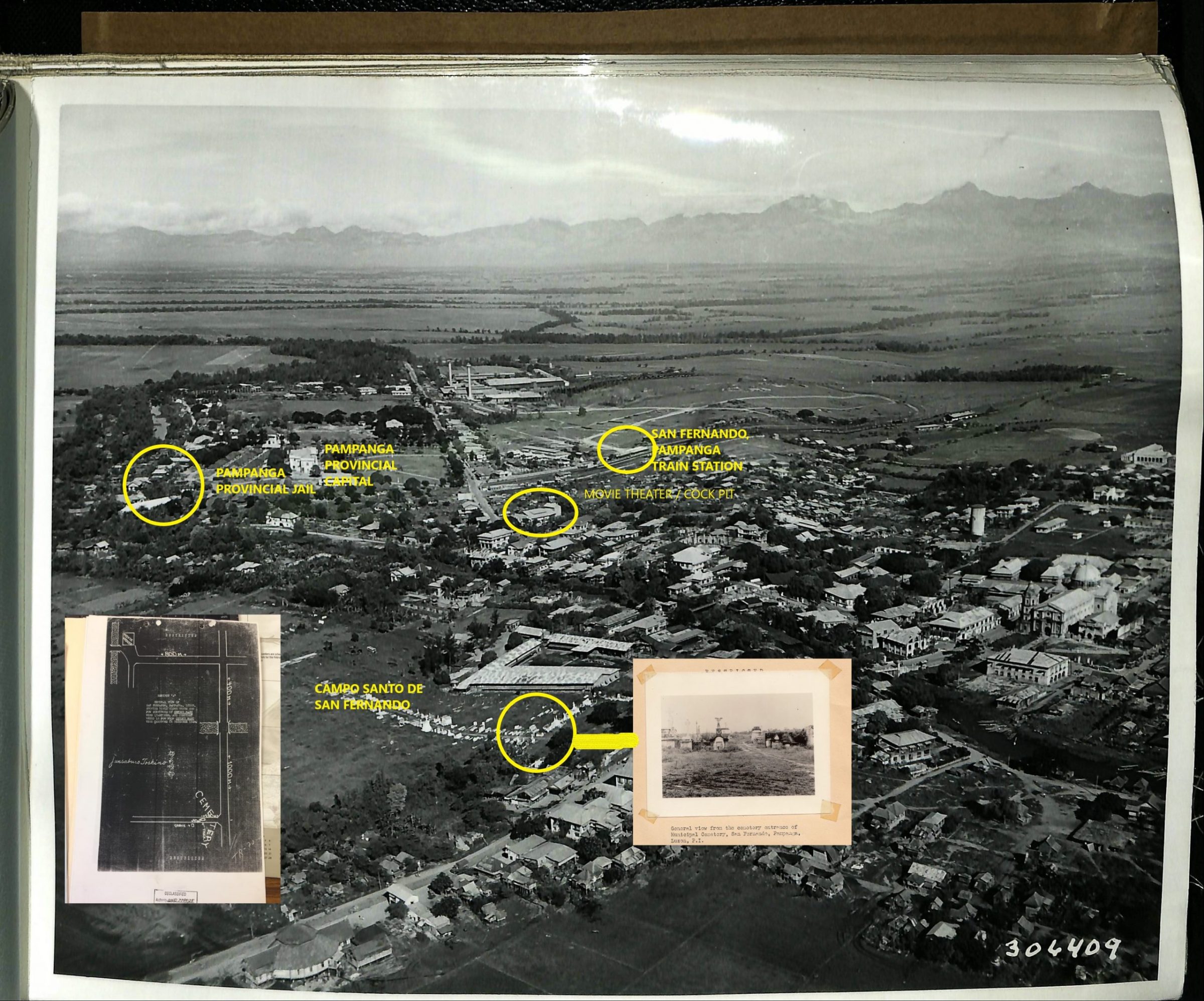 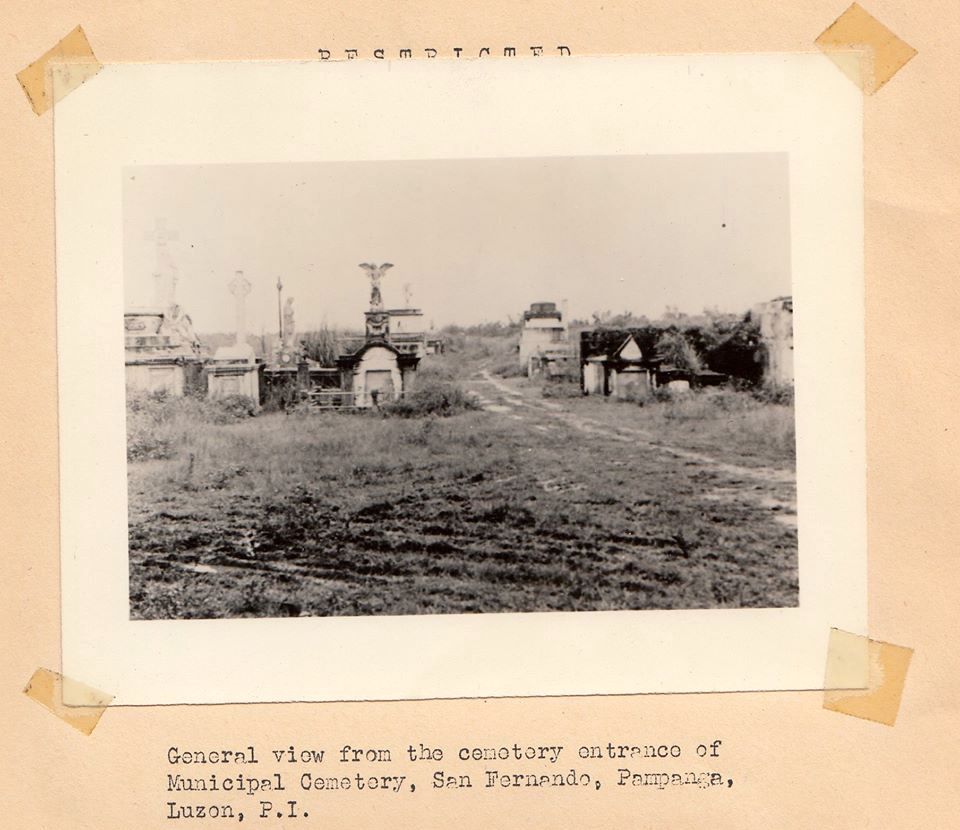 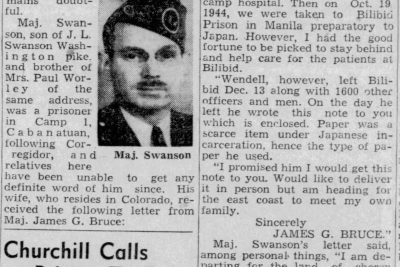 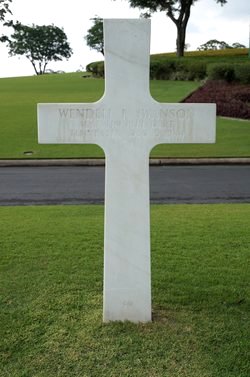