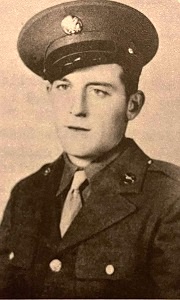 Private Warren G. H. Devault was assigned to the 12th Infantry Regiment, 4th Infantry Division. On the 6th of November 1944, the 4th entered into heavy fighting in the Battle of the Hürtgen Forrest in Germany, lasting into early December.

Private DeVault died on 20 Novemember 1944 and is remembered on the Tablets of the Missing, Netherlands American Cemetery, Margraten, Netherlands.

In November 1944, DeVault was assigned to Company F, 2nd Battalion, 12th Infantry Regiment, 4th Infantry Division. His unit was engaged in battle with German forces near Hürtgen, Germany, when he was reportedly killed in action on Nov. 20. DeVault could not be recovered because of the on-going fighting, and his remains were not recovered or identified. He was buried as Unknown at American Military Cemetery Neuville-en-Crozon (Ardennes Cemetery), Belgium, where his remains were exhumed in 2019.

Pvt Warren G.H. DeVault was accounted for by DPAA on 09/15/2020. His remains had been buried as Unknown in the ABMC Ardennes American Cemetery until their exhumation in April of 2019. Please follow link to DPAA’s website for more information https://dpaa-mil.sites.crmforce.mil/dpaaProfile?id=a0Jt0000000XgQOEA0 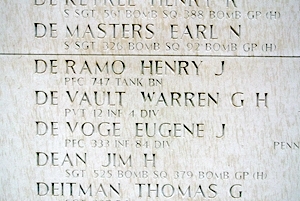