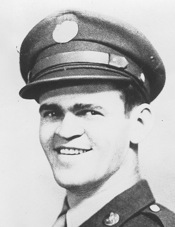 B-25C, Serial number 42-64590, departed from an airfield near Grattaglie, Italy and was on a bombing mission to Eleusis A/D, Greece. They were last seen at the mouth of Livadhostra Bay in the Gulf of Korinthos.

Statement from Bailey C. Cook, Lieutenant Colonel, Air Corps, Group Operations Officer:
Heavy accurate flak severely damaged Lieutenant Hartmeister’s plane over the target. He feathered one engine, left the formation and lost altitude toward the Gulf of Korinthos. One element of my flight detached itself and dropped back and down to protect this cripple. I left the formation (48 planes) with my flight of (7 planes) to cover this element and the crippled #42-64590 as they were being aggressively  attacked by enemy fighters. Lieutenant Hartmeister retained control of his plane from 10,000 feet to the water’s surface but continued to drop back farther and farther until our tail guns no longer covered him. I did not actually see him hit the water, as did witnesses in the element behind me and nearer to the cripple, because we entered a rain storm and the visibility became relatively poor. However, Lieutenant Hartmeister could not have bailed out his crew from the altitude at which I last saw him. His gradual dropping back leads me to suppose that he retained control of the plane despite one feathered engine and another damaged.

At the time Lieutenant Hartmeister was forced to leave his element and try for a water landing, bombing had been completed and a breakaway to the left was being affected. At this point his element leader, Lieutenant Fisher, peeled out of formation in a suicidal attempt to single-handedly save his wing-man by joining on and flying formation with him. Before Lieutenant Fisher could maneuver into this position, enemy fighters shot out one of his engines. He feathered it and continued to close fast to Lieutenant Hartmeister (I am told).

Hence we have a flight of seven planes at zero altitude, entering a storm, followed by an element of 3 planes a mile behind, trailed by two planes each having one engine feathered. According to other witnesses, one of these two exploded – they could not agree which. At this time a P-38 crashed into the water nearby and exploded. Three other P-38´s, flying on one engine, fell in on my wing for navigation home as I entered the storm.

In a water landing, the B-25 type airplane usually cracks open just abaft the wing. The engineer-gunner, radio-gunner and turret-gunner have their posts in this part of the plane. Their avenues of escape are (a) downward through hatch (usually jammed in belly landing) (2) through small port hole (provided no parachutes are worn) (3) via the waist-gun ports (after first removing the gun and mount and (4) through the cracked fuselage itself (if they are not wounded, panicky or rendered unconscious). The pilot, co-pilot and bombardier ordinarily escape through the pilot´s hatch which opens upward. The average length of time this type plane remains afloat after crash landing is three minutes. 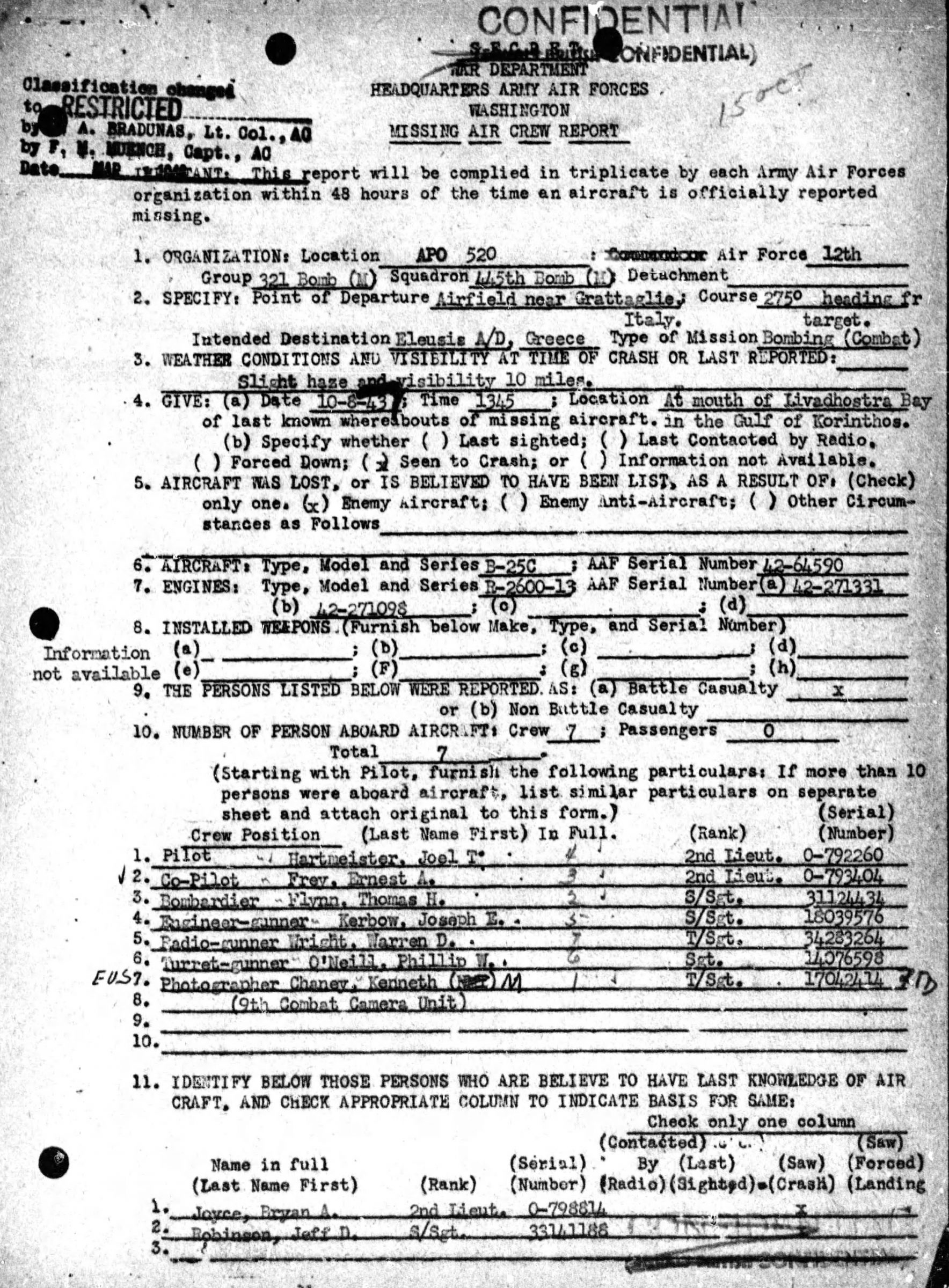 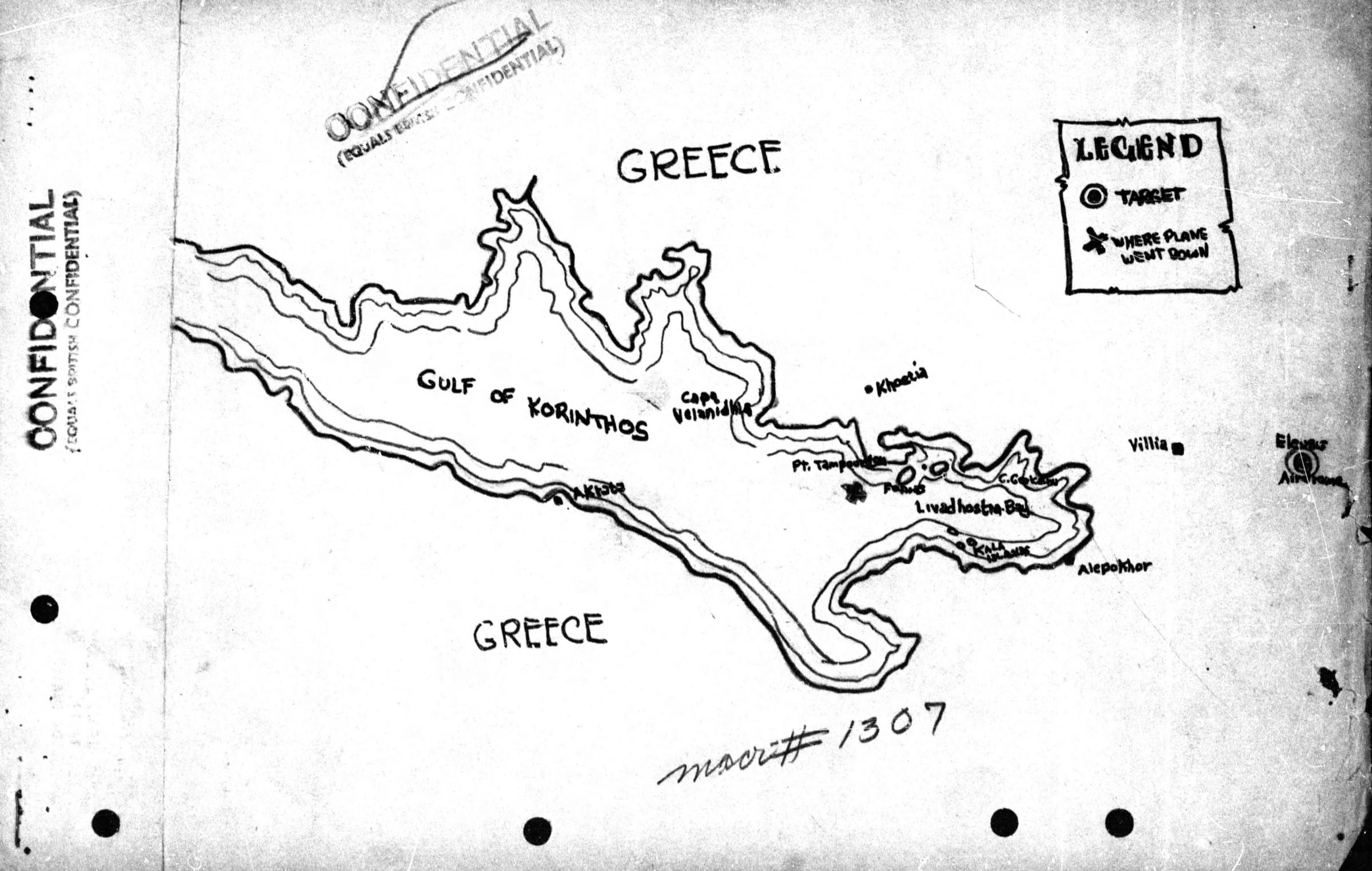