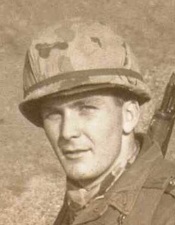 Warren Dane Campbell was born September 23, 1946 in Cherryville, Gaston County, North Carolina to L.C. Campbell and Evelyn Owens Campbell. He enlisted in the US Army from Tennessee.

Dane was a four-year veteran of the US Army serving in Korea and Vietnam. His second tour began on September 24, 1967, and he died at the age of 21 on October 23, 1967, in Quang Tin, South Vietnam during an intense ambush and firefight. He was married to his wife Sandy and his child was 13 days old when he left and 5 weeks old when he was killed.

Staff Sergeant Campbell received the Military Merit Medal and the Gallantry Cross with Palm of the Republic of Vietnam. He was posthumously awarded the Purple Heart and the Silver Star for gallantry in action

The Silver Star citation stated that Sgt. Warren D. Campbell distinguished himself by exceptionally valorous action. When his unit came under intense hostile fire and his Squad sustained casualties, Sgt. Campbell immediately directed his squad to take cover behind a dike. Spotting several of his comrades lying in an exposed area, Sgt. Campbell disregarding his own safety, left his covered position, and exposed himself to enemy fire as he attempted to reach the wounded soldiers. At this time he was mortally wounded. At the time of his death Staff Sergeant Campbell was with Company D, 5th Battalion, 7th Cavalry Regiment, 1st Cavalry Division. 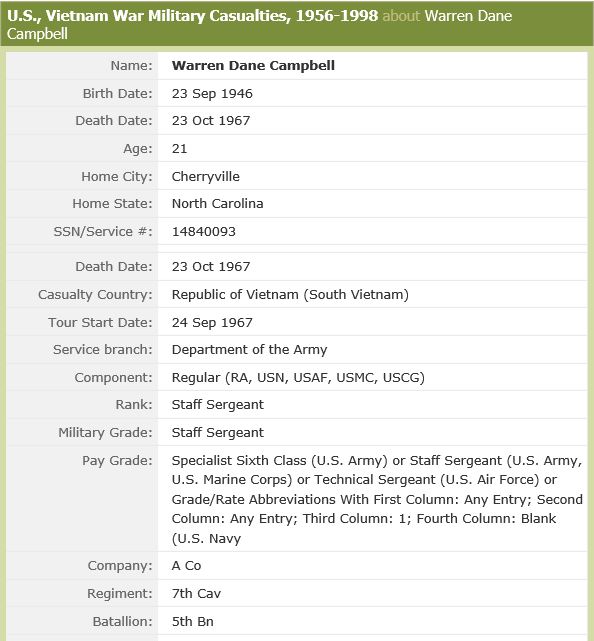