Corporal Walter Robert Brummett was born on September 26, 1924, in Anderson County, Tennessee. He was the son of Floyd H. Brummett and Irene L. Cole Brummett. He enlisted for service in World War II on March 9, 1943, in Fort Oglethorpe, Georgia. After the war, he returned to Anderson County where he married Elizabeth Williams on April 3, 1947. The couple had a child, Walter R. Brummett, Jr., around 1948, before divorcing on January 27, 1950. He then served in Korea in the 23rd Infantry Regiment, 2nd Infantry Division. He was killed in action at Old Baldy, North Korea, on July 21, 1952. He is buried at the Pleasant View Cemetery in Clinton, Tennessee. 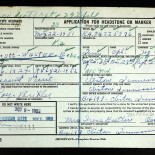