Walter Harlan Smith was a member of a plane crew during WWII. He was killed during a search for a German U-Boat. (Burl Underwood). First WWII casualty from Sevier County.

Walter was the son of Ray McKinley and Velma Maples Smith; grandson of Henry Ira and Donna Beck Smith. He is buried at Beech Springs Cemetery, Kodak, Sevier County, Tennessee.

The Knoxville Journal, November 20, 1942
Walter Harlan Smith, 18, son of Mr. and Mrs. Roy M. Smith, of Kodak, was killed Nov. 11 in a plane crash at sea off the coast of Florida. Mr. Smith was a radioman in the Naval Air Corps. Nine were killed and three escaped when the plane ran into heavy winds, the seaman’s family was informed. After attending Beech Springs High School, Smith enlisted in the Navy Dec. 26, 1941, and has visited his parents only once since. Survivors, other than the parents, are two sisters, Mrs. Matt Swann and Mrs. Jewell Kyte, both of Kodak; two brothers, Alvin and Charles wray Smith of Kodak. 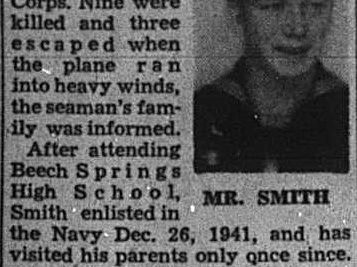