Walter E. York was killed in action on Ship USS LST-158 off shore of Red Beach, Licata, Sicily. After being bombed by a German aerial bomb on July 11, 1943. USS LST-158 earned two battle stars for WW II service. On report of burial from Division of Army cause of death is listed: Burned, his name tag was found on his body. 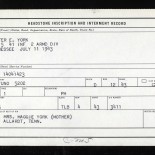