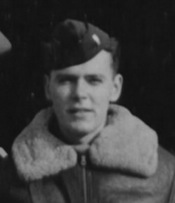 Aircraft B-17F with serial number 42-5243 departed from England, and the aircraft failed to return from a bombing mission to Kiel, Germany.

The Knoxville News Sentinel, Sunday, May 24, 1998
It’s a holiday sometimes known more for its cookouts, big movie openings and weekend trips then for its solemn ceremonies. But Memorial Day has been a day for honoring fallen soldiers since the 19th century.

Which is why it’s the most important holiday, for someone like Walter Dooley. On May 13, 1943, Dooley had just co-piloted a B-17 Flying Fortress on a raid over France so uneventful that a crewman reported, “We could have slept or played cards.”
At the time Dooley was 22 years old, a Knoxville native who was his father’s youngest son, a faithful friend to a trio of buddies he’d known since junior high and a good natured, handsome man to a female cousin who adored him. He was also two semesters shy of an engineering degree from the University of Tennessee and so extraordinarily lucky that he had parachuted to safety from a plane on one occasion and helped bring a bullet-riddled one home on another.

But less than a day later, on May 14, Dooley and the 10-man crews of roughly two dozen unescorted American bombers were fighting for their lives above the North Sea after a raid on the submarine pens at Kiel, Germany.

“I remember there were about 40, probably 40 fighters attacked us,” Irl Baldwin of Albuquerque NM., said. “As I recall they met us over the water and followed us all the way home.” Baldwin was an Army Air Force Captain who was leading the formation in his plane, “Hell’s Angels.” At the other end of the group, Lt. William J. Cline was flying just ahead of the last plane in the formation, “FDR’s Potato Peeler Kids,” piloted by Bales and Dooley. Cline who now lives in Bakersfield, California, no longer has a clear memory of what happened that day, but his diary entry for it notes his plane dropped its bombs at 12:02 p.m., “and things started to happen. Running fight for an hour or so.”

GROWING UP: Walter Dooley grew up as the youngest of four children in a house on Cumberland Avenue near where a gas station now stands. The Dooley’s were, by the standards of the depression, fairly comfortable. Walter’s father, Charles Dooley, had a good job.

Sam Fincannon, who met Walter Dooley in the early 1930s at Boyd Junior High School, said “He was … a happy-go-lucky guy, and he made pretty good grades.” Dooley and Fincannon were also good friends with Ed Dougherty and Charles Benzinger during junior high. “Ed and Walter and Sam and I ran around together,” said Benzinger, 77, the only one of the group who still resides in Knoxville. The four, all 1938 graduates of Knoxville High School, went on to UT.

“He was so handsome, and I was just kind of ga-ga over Walter,” said Ann Dooley Parsons, who was about seven years younger than her cousin. Her family lived nearby on Clinch Avenue. “We would go over every Sunday night and just have a family supper in the kitchen over there,” Parsons said. “(Dooley) loved to read,” she said. I can remember when we went there on those Sundays, he’d always (have) his nose in a book.” And she remembers model airplanes in Dooley’s room upstairs.

The Dooley’s had two cabins up near Townsend, which was where Dooley and his friends spent every summer moment they could. “There was a field where they’d play softball, and there was always swimming in the river,” Parsons said. There were other activities the boys were interested in: “We just hiked and usually there were a few girls around and we went out with them,” Benzinger said. “We chased girls but we didn’t catch many of them,” is how Dougherty, now a Nashville resident, recalls it.
When the group arrived at UT, their social lives tended to revolve around the fraternity three of them joined, and they shot pool at a hall on Cumberland. But their world was about to change. Much of the world was already at war by 1939, and the little group of friends knew they would probably be drawn into it. “We thought we were going to be heroes and all that sort of thing,” Daugherty said. “It seems to me, as I look back on it, that Knoxville was sort of a country town back then. And we were sort of country boys. The war was the biggest thing to come along, and we wanted to be in it.”

Dooley was the first to go, which broke up the group forever. “He just all of a sudden went in,” Benzinger said. No one had a chance to say goodbye, and after the war started, each had only a vague idea were the other was, though everyone knew Dooley was somewhere in England. “He wrote us a note about his new plane,” Fincannon said.

In late 1942, after training in Texas, Dooley was assigned to the 303 “Hells Angels” Bombardment Group, which flew out of a base in Molesworth, England. It was a dangerous place to be. Nearly all the pilots were in their early 20s, and the losses were horrendous. The group flew without fighter cover early in the war, and at least 24 of the original 50 pilots had been shot down by June of 1943. Dooley nearly shared their fate in a January 1943 raid over Germany in which his plane was so badly damaged he had to get a new one. In a radio interview after the incident he said he was, “anxious to go after them again.”

Robert L. Cunningham of Knoxville joined Dooley’s squadron months later. At the base he recognized his friend from Knoxville High in a photograph on a wall before discovering Dooley was already gone. “You had a job to do, and you did it,” Cunningham said. “Everybody was scared, (but) nobody would admit it.”

LAST MISSION: Walter Dooley was on his 16th mission on May 14th, 1943. He was back from a recent leave in London and had written home, telling his parents of his pleasant rest. He and Bales were “Rear-End Charlie” that day, meaning they were the last plane in the group. They were part of a four-plane formation led by Capt. Jack Roller with Cline flying to Roller’s right as they cruised toward Kiel, along with five other groups of B-17s in what was the biggest raid of the war up to that time.
Roller, who now lives in Petaluma Calif. And Cline both remember Bales and they vaguely remember Dooley’s name, but not the person. “Bales was a big guy from Idaho, a farmer.” Roller recalls. “Bales was a real nice guy. I’m sure Dooley was, too, but I just don’t remember him.” They never got a chance to know him better.
Lt. Col. Harry D. Gobrecht, a pilot and the squadron historian, wrote in his book “Might in Flight”, that the bombers were met by 100 to 150 German fighters. A running battle ensued that lasted through the bombers’ run on the target and most of the return flight to England. Dooley’s plane was in the thick of it, and Cline chronicled the result in a stark sentences. “Bales … got his left stabilizer (the left horizontal section of the tail) shot up,” Cline wrote in his diary. “He was ‘Rear-End Charlie’ about 50 miles off the coast, got hit by a (fighter). Seven chutes and he ditched … blew up in the water.” No one was recovered.

The news hit the Dooley family hard. Within a year, father Charles died of a heart attack. “Everyone in the family credited (his father’s death) to the sadness of Walter’s being missing,” Ann Parsons said. Benzinger and Dougherty didn’t find out what happened till they got home. Fincannon, in the Pacific theater, learned in a letter from his family. “As far as I was concerned, he was one of the unsung heroes of the war who went out and did his share, and he died,” Dougherty said. He said all the group went to war but, “Dooley was the only one that got killed.”

EPILOGUE: Walter Dooley’s monument rises waist-high above the clipped grass of Greenwood Cemetery – near the graves of his parents, although no body rests beneath the stone. The drone of a lone airplane slowly passing overhead and the muted hum of traffic on nearby Tazewell Pike break the silence of a hot Thursday in May. On the monument a simple eulogy is carved:  “In memory of 1st Lt. Walter E. Dooley; U.S.A. 8th Air Force; Born Nov. 4, 1920. Missing in Action May 14.1943″

The Knoxville Journal, April 26, 1942
Aviation Cadet Walter E. Dooley, son of Mr. and Mrs. Charles L. Dooley Sr., 211 West Cumberland Avenue, who will receive his silver pilot’s Wings in two weeks, Wednesday afternoon, was forced to jump from a plane at Foster Field, Texas. The landing gears on the pursuit ship Dooley was flying on a routine training flight stuck, and rather than have the Young man take a chance, officers instructed him by radio to bale out at an altitude of 5000 feet. The plane crashed, but Dooley was uninjured. This was the first time a pilot has been forced to bale out of his ship since the Victoria, Texas, air facility was opened eight months ago. 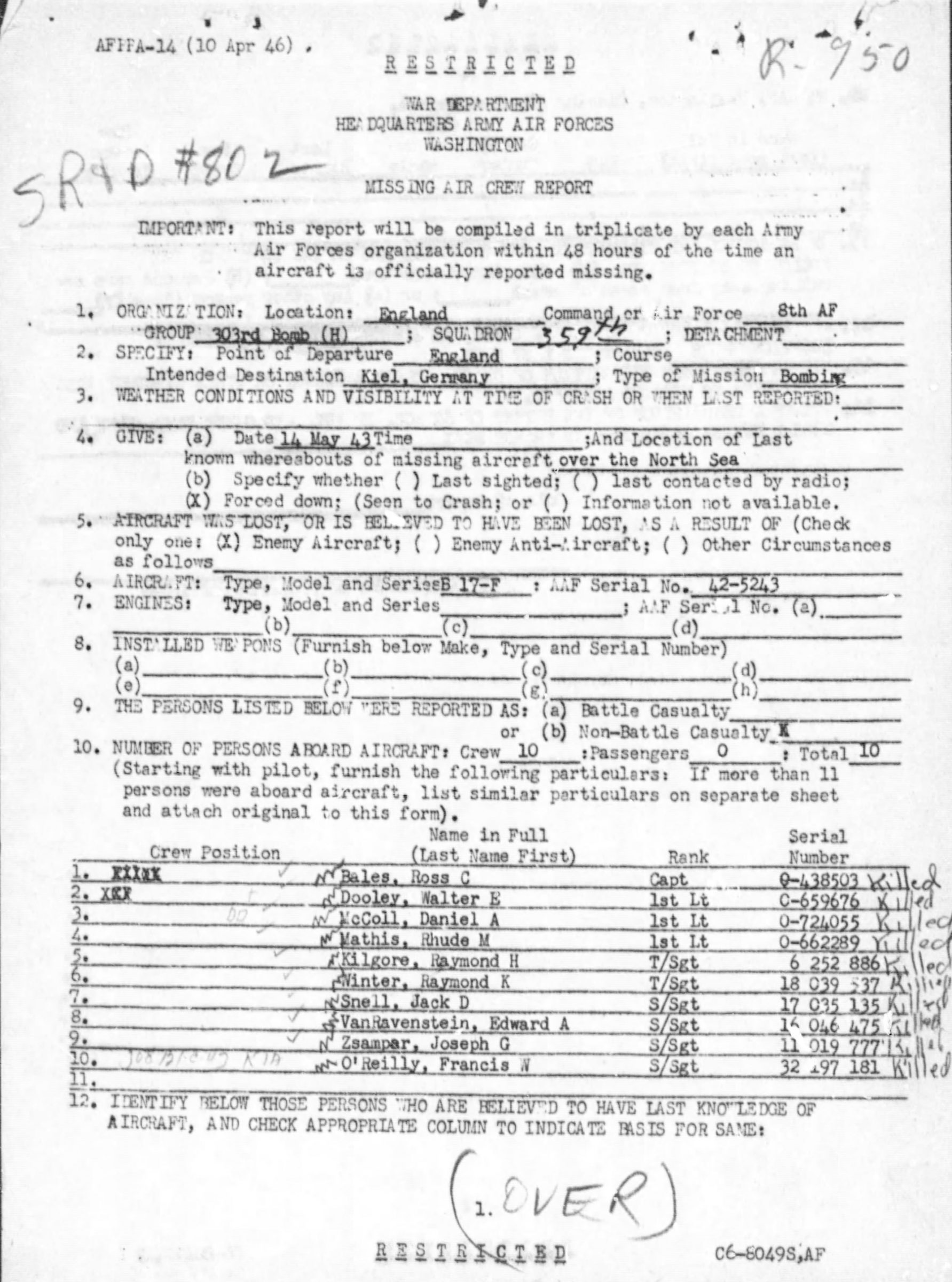 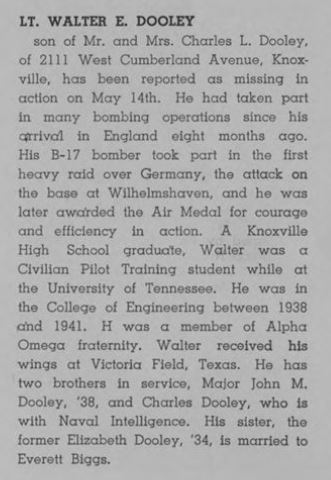 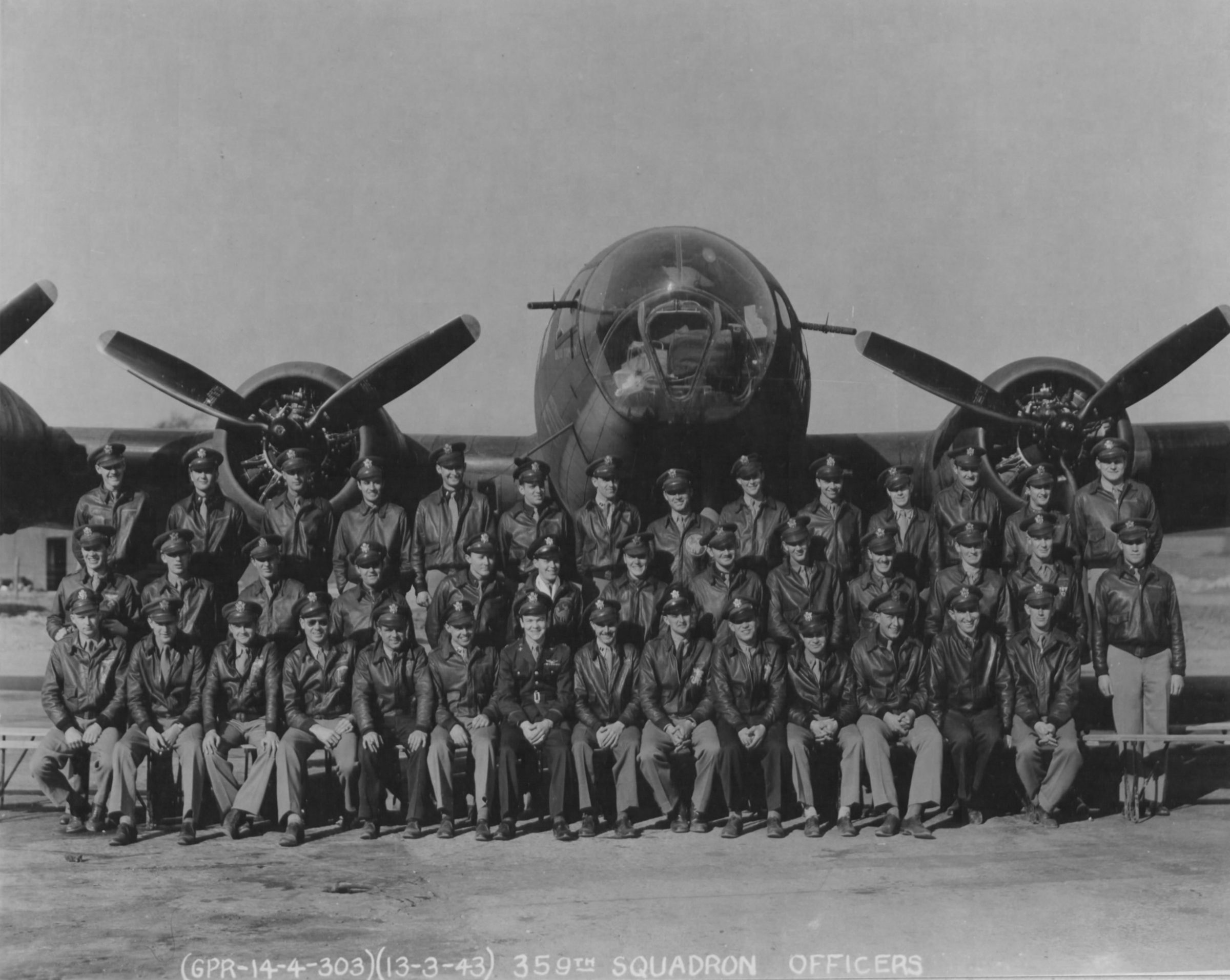 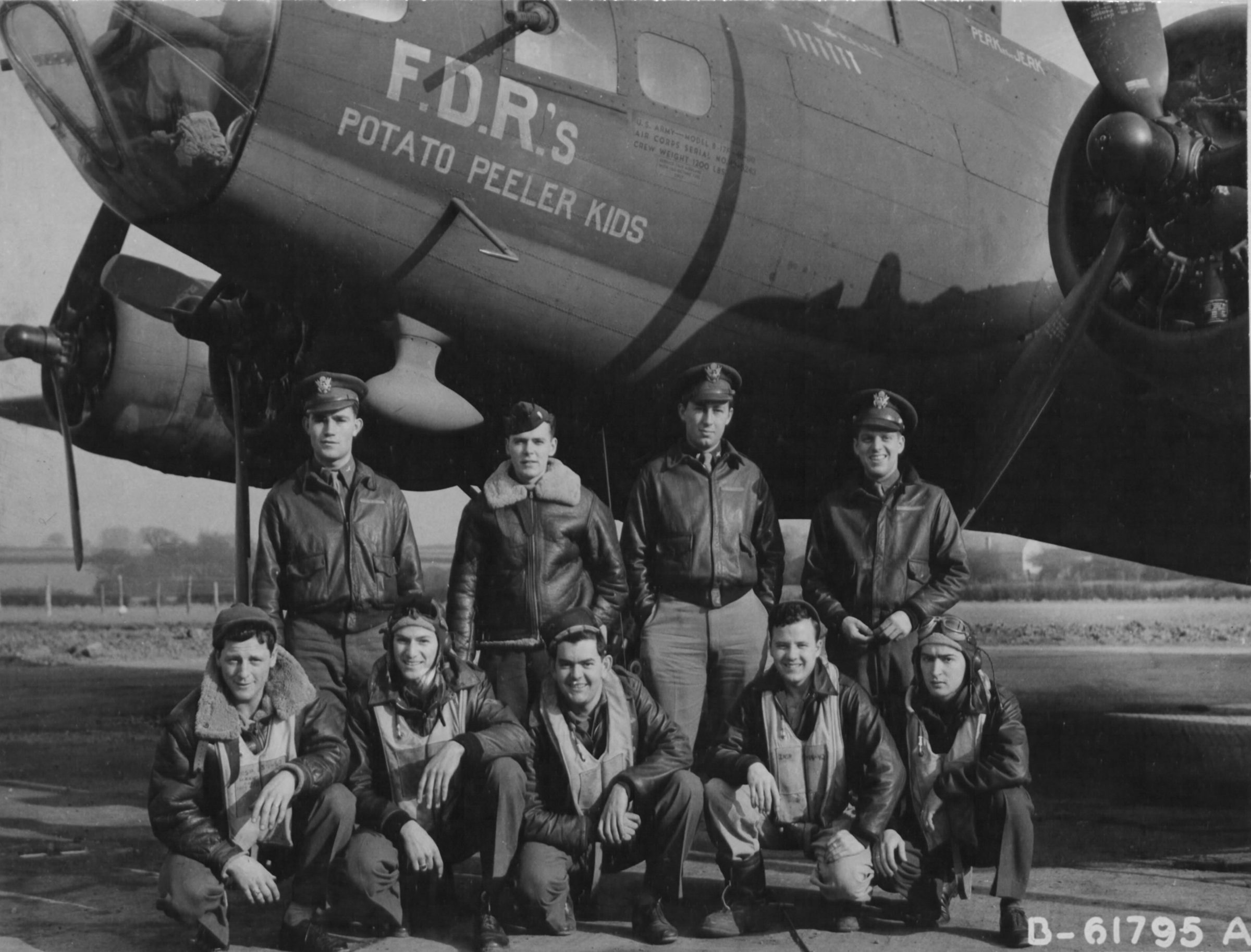 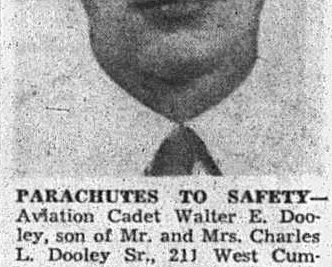