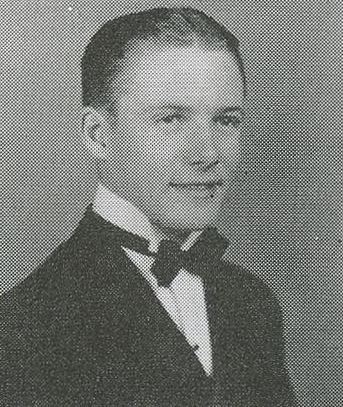 First Lieutenant Walter Estel Burnett, Jr. was born around 1919. He was the only child of Walter E. and Georgia M. Burnett. He grew up in Knoxville living with his parents and uncle, Will A. Burnett. First Lieutenant Burnett served in the Pacific theater in the Corps of Engineers. He died on Wednesday, July 22, 1942. His death is listed as died non-battle, died in a Japanese prisoner of war camp on Luzon. He is memorialized at Manila American Cemetery in Fort Bonifacio, Manila, Philippines.

The Knoxville News-Sentinel, August 12, 1942
A letter written by Lieut. Walter E. Burnett Jr., 22, from the Philippines on Feb. 20 reached his parents, Mr. and Mrs. W.E. Burnett, 1319 West Fifth Avenue, yesterday. It told of his promotion from the rank of second to first lieutenant and said he’d had “plenty of narrow escapes.” “He wrote that they had only two meals a day, and rice every meal with salmon or corned beef, “ Mrs. Burnett said, “but he said that he was all right.” We were surely glad to get the letter even though it was written before the surrender of Bataan. His family believes him to be a prisoner. Graduated from the U-T School of Engineering in June, 1941, Lieutenant Burnett entered the Army Engineering Corps immediately and in August was sent to the Philippines.

The Knoxville News-Sentinel, April 8, 1945
First Lt. Walter E. Burnett, reported missing since 1941, died July 31, 1942 in a Japanese prisoner of War camp on Luzon, the War Department notified his parents, Mr. and Mrs. W.E. West, Fifth Avenue, last night. “An officer who had survived the sinking of a Jap prison ship wrote us a few months ago that Walter was dead,” Mrs Burnett said, “but we awaited confirmation from the War Department.”
Lt. Burnett entered the Army in June, 1941, and went to the Philippines in August of that year. He attended U-T.

Picture from the University of Tennessee, yearbook 1941 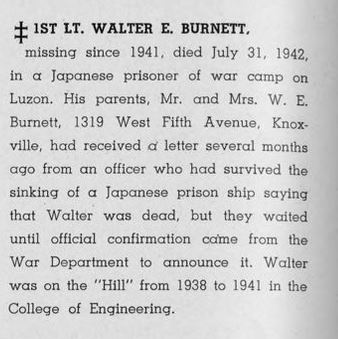 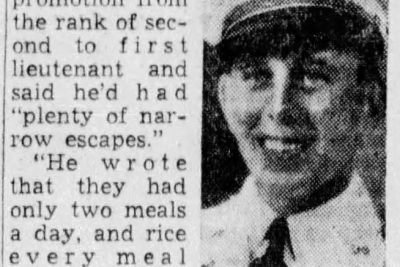 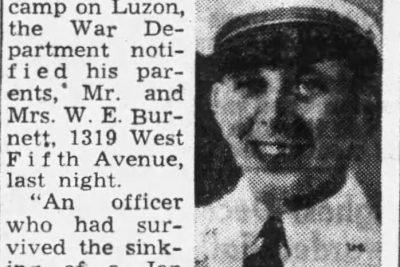