Walter B. Mills enlisted in the United States Army on July 31, 1942, at Camp Forrest, Tennessee, and served during World War II.

During the Korean War, Corporal Mills was a member of the 212th Military Police Company, 40th Infantry Division. He was killed in Action while fighting the enemy in South Korea on August 11, 1950.

Corporal Mills was repatriated to Knoxville and was buried at Knoxville National Cemetery on September 10, 1951. 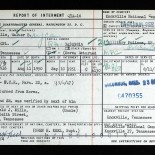