Walter Bailey Knight was born in Sevier County and lived on Forest Avenue in Knoxville when he left for the army. He was killed in action in the battle at Kasserine Pass, Tunisia, in February 1943. He was MIA until April 1943 when he was declared KIA. After basic training, he came home on leave to Oliver Springs, Tennessee, to his wife’s sister’s farm. The bus dropped him off on Harriman highway at what is now Devaney Road. My dad, Bob Younger, who was about four then, was the first to see him walking up the road. Once his leave was over, he was shipped to England for staging and was later shipped to North Africa.
–Submitted by Robert Younger

His wife’s name was Sarah Dorothy (Dot)  Knight- no children

The LaFollette Press, June 27, 1943
Walter B. Knight is missing in action in North Africa since April 22, his wife, Mrs. Dorothy Knight, 1926 Forest Avenue, has received word. He has been in service since March 3, 1942, and in foreign service since July 1942. He is a former Employe of C.B. Atkins Furniture Company. 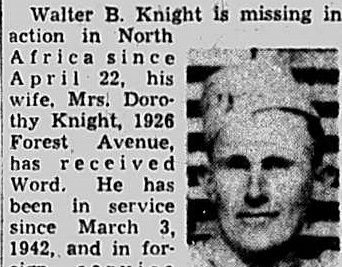 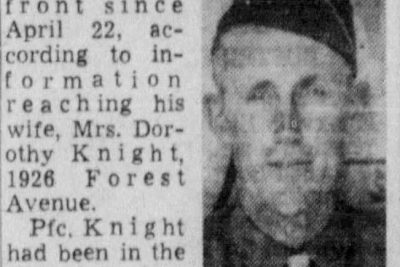