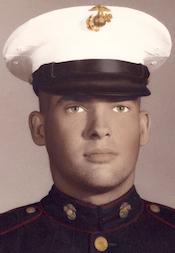 William, the son of Willie W. Mott and Polly A. Mott of Jefferson City, TN enlisted in the US Marine Corps on January 8. 1968. He arrived in Vietnam on July 21 and was assigned for duty with the Sniper platoon, HQ Company, 7th Marines, 1st MARDIV (Rein) FMF.

During Operation Linn River, the men of Company E, 2d Battalion, 26th Marines were in their defensive perimeter near Da Hoa An village complex in Dien Ban District of Quang Nam Province when they were hit with incoming enemy rifle fire. LCpl Mott, who had been attached to the unit as a scout sniper, was hit and killed by the hostile fire.

“Book written, ‘Point of Aim Point of Impact,’ by Jay Taylor USMC Sniper 2009. William Larry Mott was a volunteer for operation freedom and for his country. He has never been forgotten, for many brave men have come along way to see my Mom and pay respect for their memories while serving with him. Many Marines have all had moments to explain, and the regrets of what had happened to my brother. The toughest thing was facing her, my Mom, as Marines would tell me later, but they knew it was the proper thing to do. The Marines made my Mom’s day when they came to see her, she was so proud that they came and paid respect, for she knew he was a special individual, her son and first born child to her. God Bless.

William Larry Mott attended many schools in the Knoxville area and Jefferson High School. His memories could be in the those halls of Bearden High School. His name Larry was significant among family because of his dad’s name being Willie and to keep confusion when asked for. He was known for the way he dressed with Gant shirts, pressed wool pants, wing tips or tassel loafers, black alligator belt while attending High School. He loved Marine’s dressed blues and appearance it had. He was discipline to the way he wore his clothes, makes excellent fit for the Marines.”
-Submitted by his brother, Vernon Mott