News article The Kingsport Times, 30 November 1943
Old Adage holds true in Clasby Family The old adage ‘like father, like son’, certainly holds true in the Alpha Omega Clasby family. Victor Eugene, the 17-year-old son of Mr. and Mrs. Clasby, who lived at 1622 Highland Street, left the Kingsport Navy Recruiting Office in late October to begin his training as a bluejacket. The elder Clasby who passed his Navy physical with flying colors despite his 43 years, left November 23 to begin his second naval career. He served as a seaman first class, on the U.S.S. Matsona during the first World War. He also did duty on a sub-chaser for five months. Since 1930 Mr. Clasby has been employed as a coppersmith at the Tennessee Eastman Corporation. He is a member of the Hammond Post of the American Legion and was a top sergeant in the third machine gun and chemical company of the State Guard. Young Clasby was a sophomore at Dobyns-Bennett High School at the time of his enlistment. A seaman second class, he will complete his boot training at the San Diego Naval Base soon.   Kingsport News 10 March 1945 Victor Clasby dies in action; dad in Navy hospital Victor Clasby, S 1/c, died of wounds received in action at sea, according to information received by his mother, Mrs. A.O. Clasby, 1622 Highland Street, from the War Department Wednesday afternoon. Further information will be sent the family later, the telegram indicated. Seaman Clasby was stationed in the Southwest Pacific. His father, A.C. Clasby, S 1/c, U.S.N.R. is convalescing in a Naval hospital at San Bernardino, California. A veteran of World War I with 18 months of sea duty, he re-enlisted in the service, after his son volunteered for the Navy in October 1943. He has also seen World War II service in the Pacific, including action at Saipan. Both father and son served in landing craft units.

The Kingsport Times News 22 April 1945
Details of the accident which cause the death of Victor Eugene Clasby, S 1/c, USNR, have been received by his parents, Alpha O. Clasby, S 1/c, stationed at a Naval Repair Base in New Orleans, La., and Mrs. Clasby, 1622 Highland Street, Kingsport. According to a letter from Captain R.F. Beyer, commanding officer of the USS Hinsdale, the accident occured in action about 12:05 p.m. February 22, 1945, during the assualt phase of a landing on enemy soil. Young Clasby, whom the officer commanded highly for his ability and qualities of leadership, received fatal injuries when his landing craft was being lowered from repair deck to the sea. He was crushed when a huge wave picked up the craft, dropped from under it and sent it crashing against the repair ship, the captain wrote. Clasby was buried at sea by the ship´s chaplain February 24. Seaman Clasby volunteered for Navy, October 22, 1943, took his boot training at San Diego and received amphibious landing traning on the West Coast. He went overseas in October, 1944. Following the news of his death, his father, Seaman Clasby, came from the United States Naval Convalescent Hospital at San Bernardino, Cla., for a 15-day leave with his wife and daughters, Juanita, Maxine and Marjorie Clasby. He was asssigned to this hospital following a heart attack aboard his ship at San Diego, Calif.

Picture below of Victor E. Clasby with his father, Alpha O. Clasby. 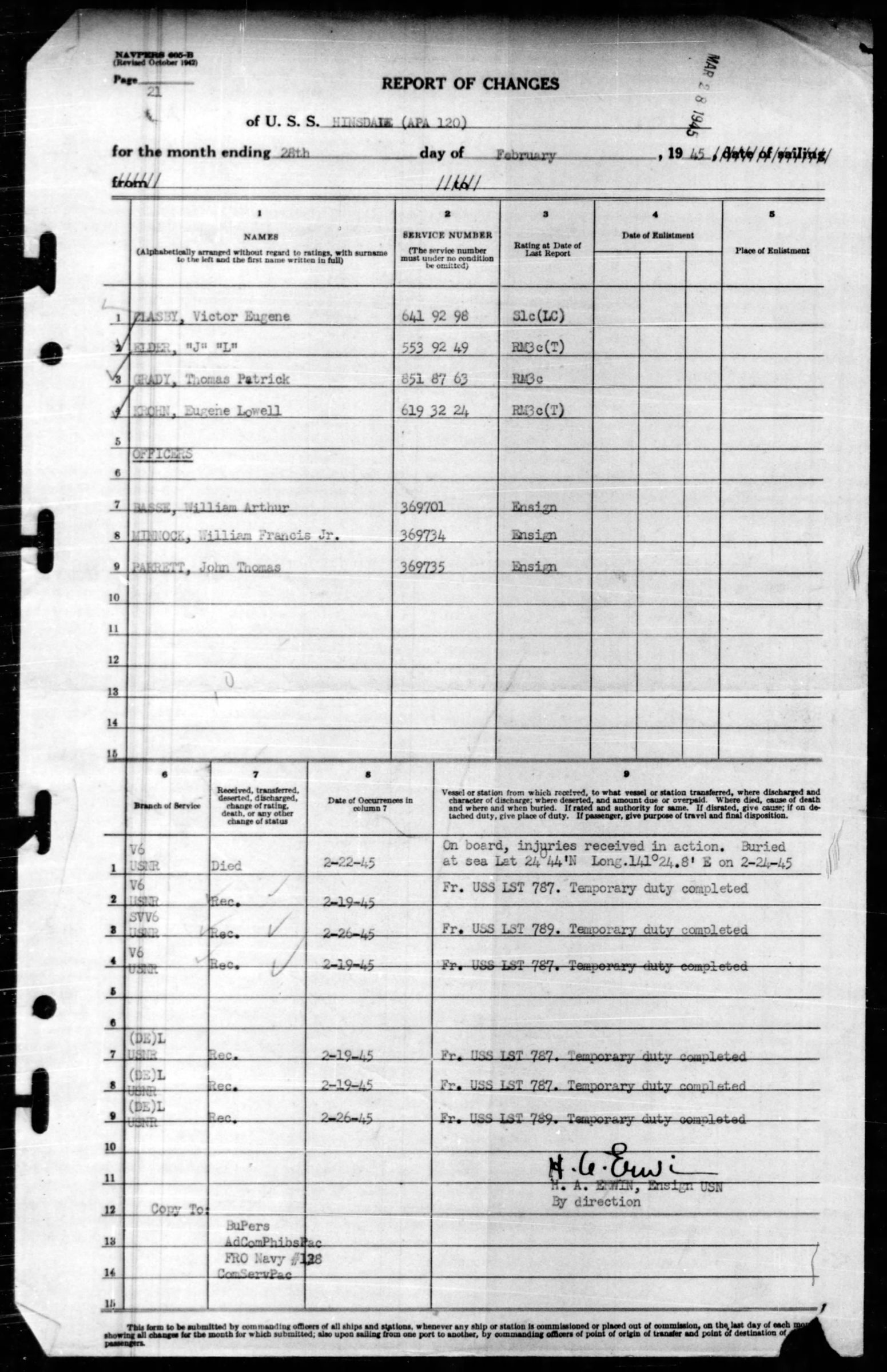 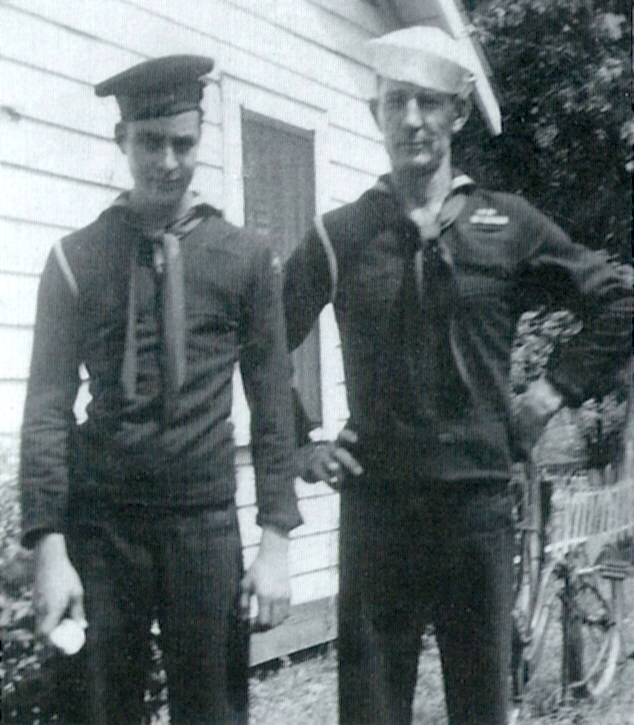