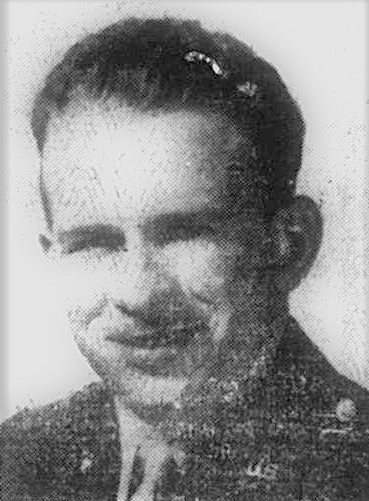 Aircraft B-29-42 with Serial number 42-63493, nicknamed Star Duster, departed from Saipan, Marianas Islands on a combat mission to Nagoya.

MACR 13826, submitted by the 878th Bombardment Squadron, 499th Bombardment Group, reveals that the last contact with this aircraft was at 1818 hours, on 24 March 1945, when it departed its station at Saipan, Marianas Island, on a combat mission to Nagoya, Japan.

Two of the crew members, M/Sgt Manuel Fernandez Jr. and PFC Lewis E. Johnson, were reported killed in action on the basis of Reports of Burial stating they were killed in a plane crash at Nagakute-mura, Honshu, Japan.

Japanese witness to the crash state that the plane caught fire in the air and exploded upon impact with the ground. One man was seen to parachute from the burning plane, but his parachute failed to open.

Since only one unidentified member of the crew, who failed to survive, is known to have bailed out it is evident that the remaining eight crew members were in the burning aircraft when it struck the ground and exploded. It is possible that following the explosion insufficient remains were collectible to establish the existence of nine bodies or that the remains of the crew which were interred by the Japanese were in such an incomplete state that is was not possible to establish the number of bodies upon subsequent disinternment.

Scott County news, April 27, 1945
Lieut. Vernon W. Duncan, 25, husband of Norma Mayo Duncan, and son of Mr. and Mrs. Walter Duncan, of Winfield, Tenn., has been reported missing in action over Nagoya, Japan since March 25th. Lieut. Duncan was a navigator on a B-29. He entered service in June 1940 and left for overseas duty in Dec. 1944. He received his training at a navigation school in Monroe, La., where he met his wife, Norma Gayle Mayo. They were married in June 1944 at the Baca Ritone Air Base Chapel, Florida. Lieut. and Mrs. Duncan have a daughter, Donna Gayle, born March 23, 1945. It is not likely that Lieut. Duncan had received word of the birth of his daughter when he left for his mission on Sunday. Mrs. Duncan is in the St. Francis Hospital Monroe, La. at present. 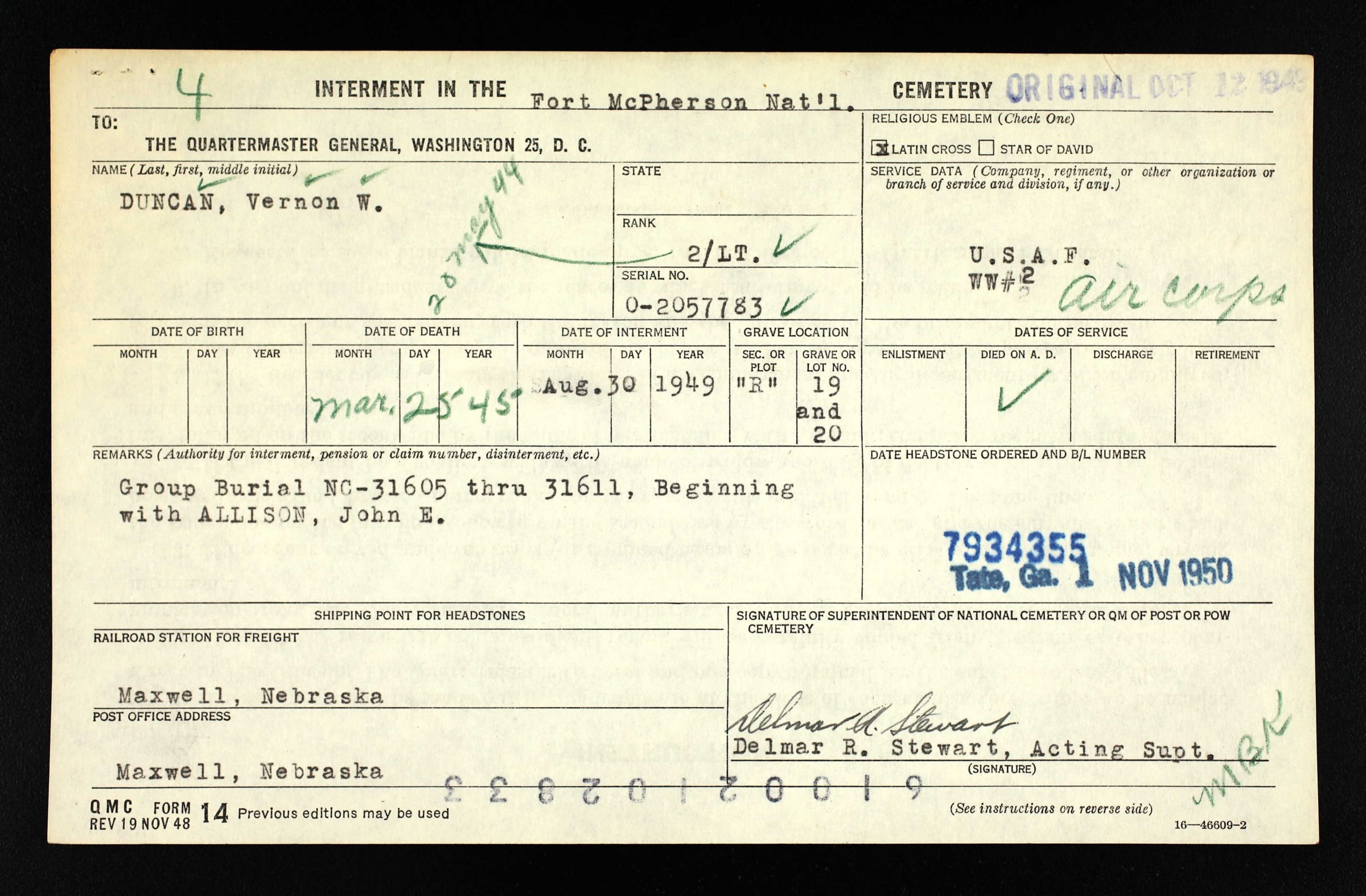 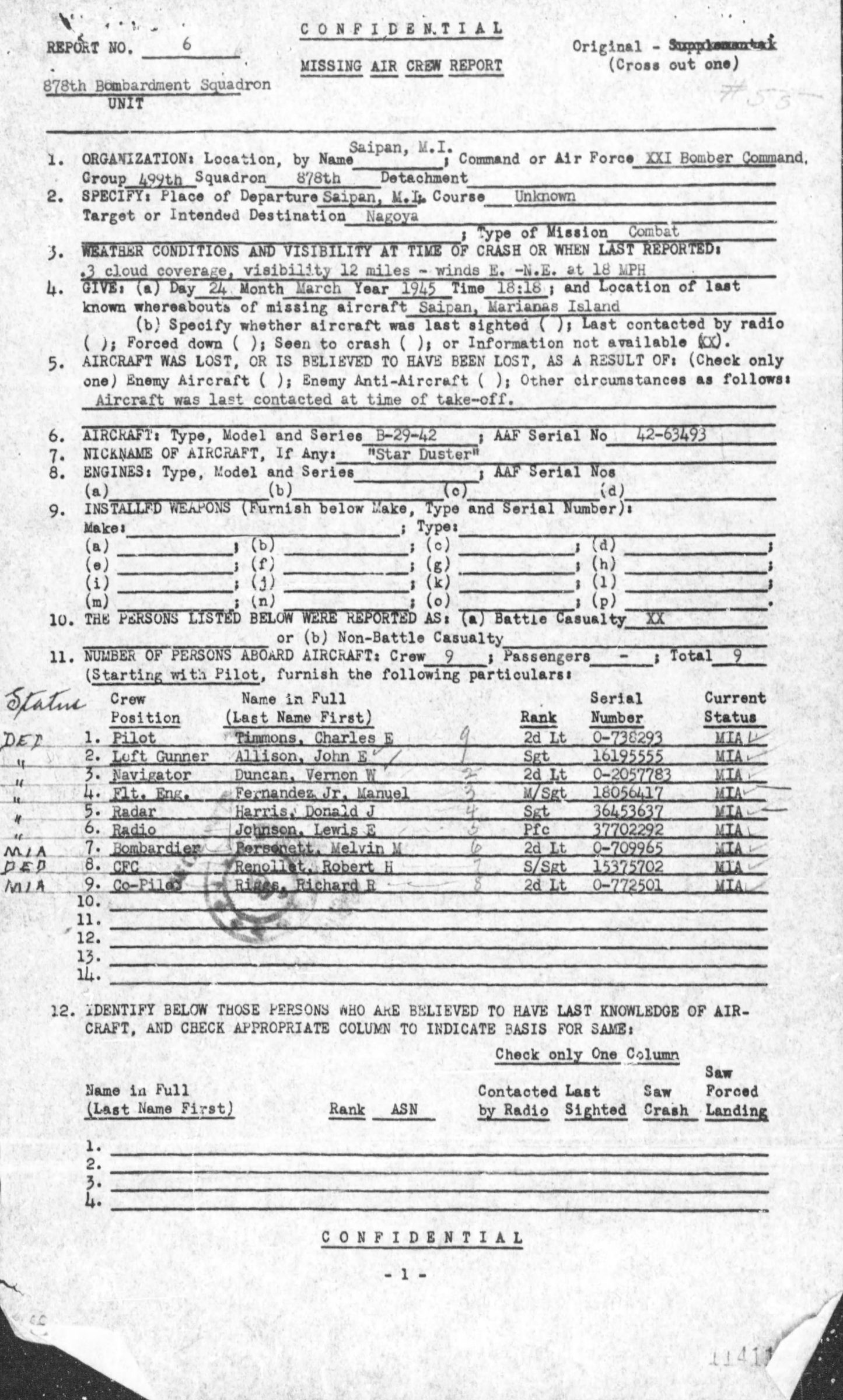