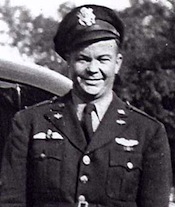 In 1941, he enlisted in the Royal Canadian Air Force. In October 1944, he transferred to the American Air Force with the Rank of Flight Officer. Here he trained as pilot of the P-47 Thunderbolt Fighter plane. He was expected to go to the Pacific theatre at the time the war ended. Then, he was sent to Bluethenthal Field at Wilmington, North Carolina, where he was stationed at the time of his death on October 16, 1945 in a plane crash at Wheeling, West Virginia, when it developed trouble on a scheduled flight to Pittsburgh. He was 31.