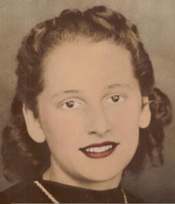 Vilena L. Velma Cannon was born November 14, 1921 in Greene County, Tennessee. She was the daughter of Charles W. Cannon and Arizona Zona Mahaley Stills Cannon and had brothers, Charles V. and Dana L. Cannon. She was a member of Piney Grove United Methodist Church.

Velma graduated high school from Greeneville High School on May 24, 1940 where she was a member of the National Beta Club and received recognition for outstanding character and achievement. She joined in the Woman’s Army Corps when she was twenty-one years old enlisting on January 22, 1943 at Fort Oglethorpe, Georgia as an Aviation Cadet. She was never married.

Private Velma L. Cannon died in service on June 29, 1943 while undergoing surgery for a brain tumor at Fort Devens, Massachusetts. She was returned to her hometown of Greeneville and was buried at River Hill Cemetery in Greeneville, Tennessee on July 4, 1943. 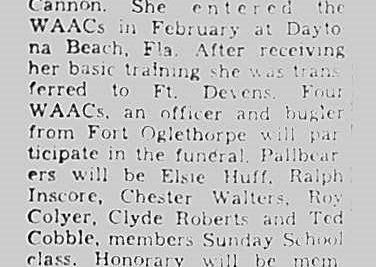 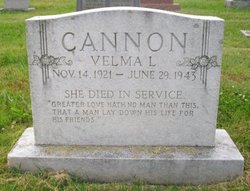