Ira Urious Burgess was born 28 May 1896 in Cumberland County, Tennessee, son of Jesse Thomas Burgess and Rebecca Jane Brewer. He died of wounds received in action on 5 September 1918.

The following are from the book, “The House of the Burgesses, A Genealogical History of the Burgess Family” by Michael Burgess with Mary Wickizer Burgess. The author does not say what source he is quoting from on the first entry.

Urious I. Burgess, Private First Class, serial number 1,315,949, was born in Cumberland County, Tennessee, near Winesap, and at the time of his death in France was twenty-two years of age. He had always resided in said county, and at the time he volunteered his service to his Country he was engaged in farming with his father. The writer hereof was not acquainted with him until he became a member of the Volunteer Company organized at Crossville, and consequently knows very little about his private life before entry into the service. He enlisted in the National Guard, Crossville Company, 2nd Tenn. Inf., which later merged with 2nd N.C., and became a part of that famous Thirtieth Division, Co. G, which had few if any equal, both defensively and offensively. Urious I. did not get to take part in the breaking of the Hindenburg Line, he having been removed from our ranks at the Battle of Ypres, Belgium, by a piece of shrapnel that passed completely through his body, said wounds being received on the 4th day of September, 1918, from which he died the following day at the hospital in Bregnes, France. He was buried in the cemetery Croix Rouge, Bregnes, France, by the side of many other comrades who made the Supreme Sacrifice during said battle. On November 12, 1920 his body was transported to the United States and re-interred at Winesap, Tenn. He was the son of Tom and Jane Brewer Burgess. His father died when he was four years old, and his mother, who survives, lives in Crossville. Three half-brothers, Clyde and Earl Myers of Crossville, Revis Myers in the Navy and now in China, and Mrs. Clyo Hassler, Crossville, survive.

Below is the other entry for Urious.

Urious Ira. His name is also given as Ira Urious on the 1917 draft list, and Ulysses Burgess in the 1900 census. Born May 1896 in Cumberland Co., TN. Listed with his mother in the 1900-1910 censuses of Cumberland Co., and in the 20 June 1917 draft register of Cumberland Co. Ira Burgess participated in a series of front-line battles, being wounded at the Battle of Ypres Belgium on 4 Sept. 1918. He died of his wounds on 5 Sept. 1918 at Bregnes, France, and was buried at the Croix Rouge Cemetery there. His body was returned home on 12 Nov. 1920 for reburial at Winesap, in an unmarked grave in the Burgess Cemetery. A lengthy memorial to Urious appears in the 12 Sept. 1935 issue of the Crossville Chronicle, and his name is inscribed on a monument dedicated to local soldiers who died for their country in downtown Crossville, TN.
-Submitted by his Grand Niece Marilyn K. Tarvin 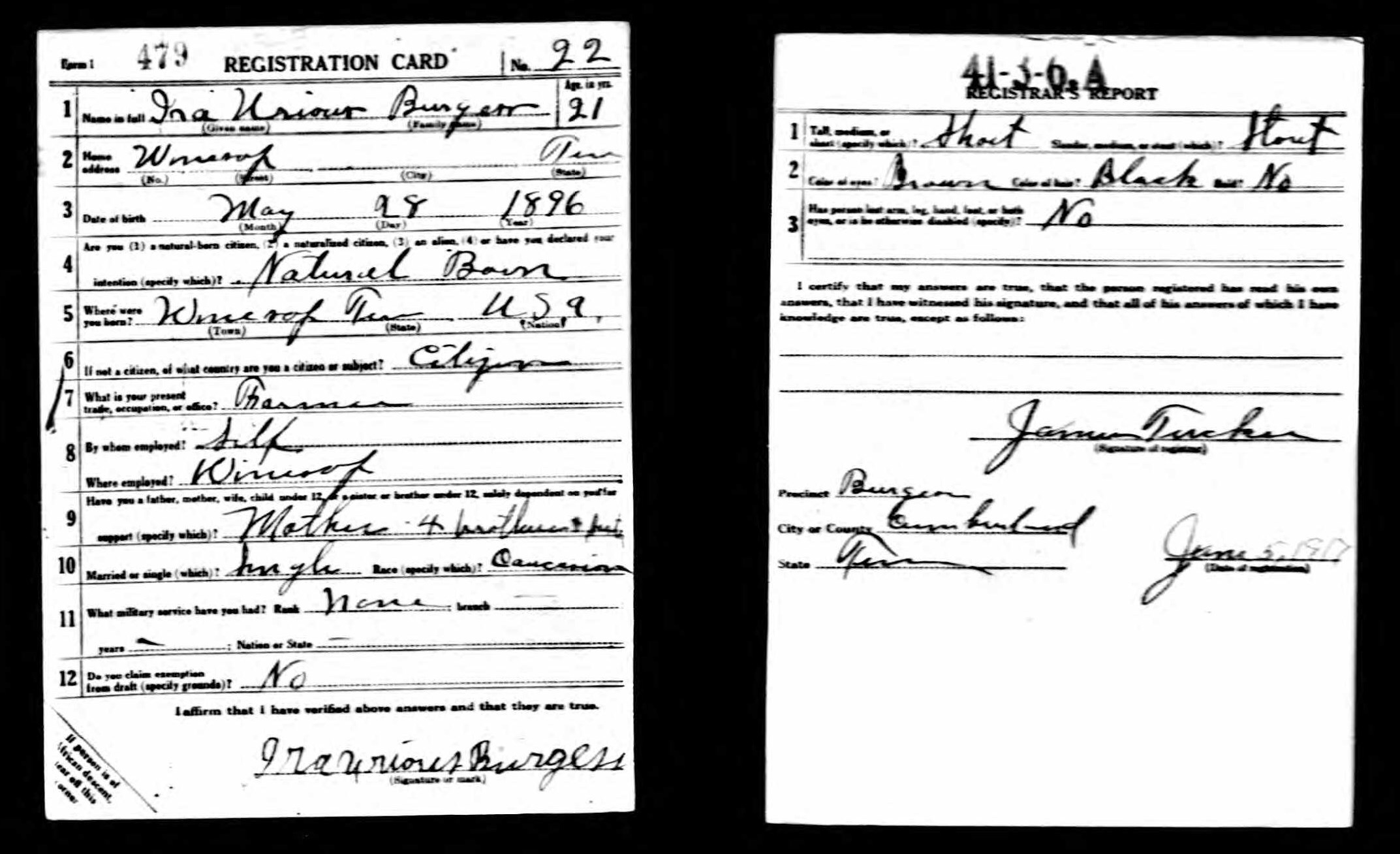 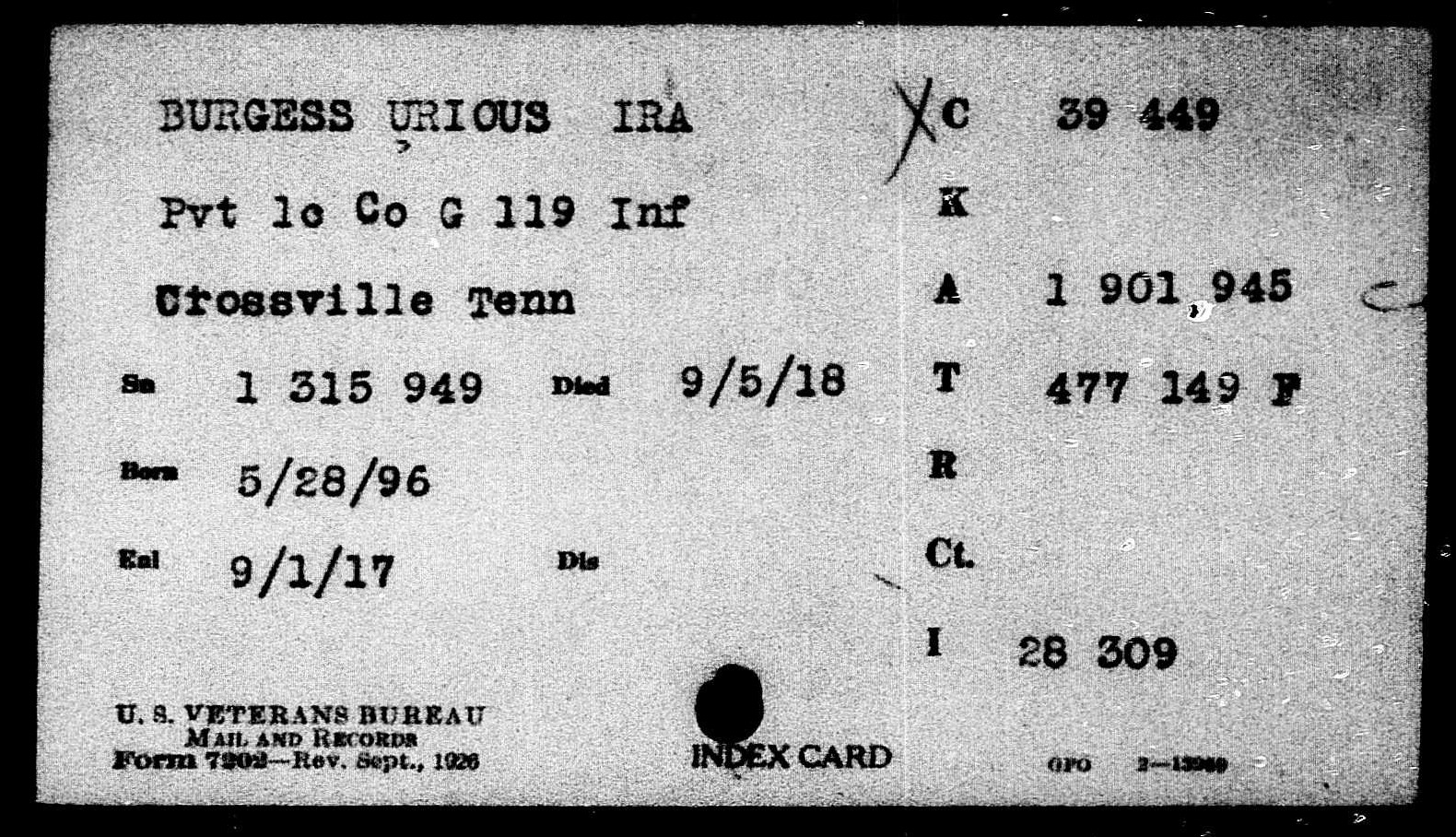 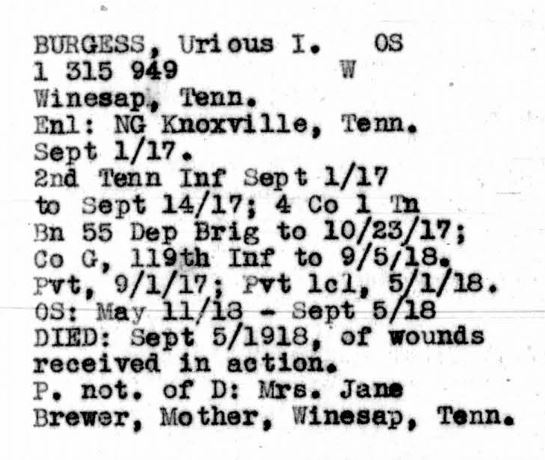