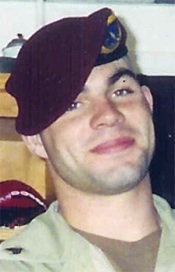 Staff Sgt. Travis Wayne Nixon, 24, of Fayetteville, NC, whose parents and other relatives live in Blount County, was killed October 29, 2005, while in action in Afghanistan in support of Operation Enduring Freedom. The Department of Defense announced he died from injuries sustained north of Lwara, Afghanistan, when his patrol was attacked by enemy forces using small-arms fire and rocket-propelled grenades. He was a member of the 2nd Battalion, 504th Parachute Infantry Regiment, 1st Brigade, 82nd Airborne Division, Fort Bragg, North Carolina.

He was born in Shreveport, Louisiana, and spent his childhood in St John, Pine City, Washington, Germany, and Fayetteville, North Carolina. He was a 1999 graduate of St. John-Endicott High School. He enjoyed playing the saxophone in the concert and jazz bands and was an avid sportsman. Travis enjoyed being part of the swim team and loved track, football, baseball, and basketball. He was a member of the Future Farmers of America for four years.

A son of Pine City died Saturday while serving in Afghanistan. Those who knew him say he died because he gave more than was asked of him – the ideal that defined his life. Staff sergeant Travis Wayne Nixon, 24, was nearing the end of his third overseas deployment with the United States Army when an enemy ambush surprised his squad while on patrol near Lwara on the Pakistani border.

“My understanding is that he was squad leader. He died making sure his squad got to safety in an ambush,” said Frank Watson, Nixon’s high school football coach and teacher. “I was not surprised Travis would do that. If his job was to lead his men, he would lead his men the best way he knew how.”

His mother, Maggie Nixon, told his former hometown newspaper, The Community Current, that he was the only casualty. “He alerted his squad
of nine men of the danger and no one else was hurt.”

Dan Harwood, of nearby St. John, considered Nixon to be a second son after watching him grow up as the best friend of his own son Randy. “One thing that everyone needs to know about Travis, he firmly believed in our country and he believed in what he was doing in Afghanistan. One of the things that was real evident, and this came from his mom, was that he wanted to be able to help the people of Afghanistan to be free, to be independent, and to not be bullied,” Harwood said. The 1999 graduate of St. John-Endicott High School enlisted the summer before his senior year of high school. He entered the service after graduation.

“You aimed Travis,” Watson said. “He would walk around and you could tell he was a little coiled spring but it wasn’t all physical. He would attack music the way he did football, the way he did being a soldier.” Nixon had a passion for music and played the alto sax through his years in middle school and high school.

Billy Ray, Jr. was Nixon’s band instructor, and his junior high baseball and football coach. He remembered that Nixon would trudge in at 7:30 or 7:45 in the morning to practice with the high school jazz band because it was “one of his biggest loves.”

“He was very passionate about music,” said Ray, who remembered Nixon’s fondness for big band and talking with him about Benny Goodman and Tommy Dorsey. He said plans are forming to create a scholarship for St. John-Endicott students pursuing education in music, “that his name, his love, will have a part of.”

Ray shared his favorite story about Nixon that happened after the last band concert his senior year. “Traditionally I say goodbye to the audience and thank you for coming, I stick around to put stuff away, until 11 o’clock or however long it takes,” Ray said. As he was stacking chairs, he heard footsteps coming up behind him. He turned around and found Nixon. He said, “Well you can’t put all this stuff away yourself,” Ray said. “He always gave more than I asked for. He was a good kid, one of those freckled-face kids that you wonder what to do with sometimes … what you don’t realize is that he figured it out,” Watson said. “That is what teaching is about, give them enough information for them to figure it out themselves.”

He remembered the moment Nixon decided to be a soldier. A class project caused the students in Nixon’s 23-person graduating class to examine possible vocations for after graduation. Watson said Nixon’s first choice was engineer. “If you knew Travis, that would be hard to believe.” He said, “Coach, what’s calculus?” Watson said. After an explanation, Nixon went back to the drawing board. “He was 16 years old when he decided to be a soldier, and he was good at it,” Watson said.

“Sometimes in life there are turning points,” Watson said. “Sometimes they’re sharp and sometimes they’re not. When he got to be mature enough to realize he wasn’t going anywhere in advanced math, he found something he could be successful at.”

Watson explained how Nixon became a son of the rural community by comparing it to the time Watson first brought his baby granddaughter to a basketball game. He said people held her and passed her up through the crowd. It took him a couple years to figure out and realize that. “They did that to all new babies.” He said everybody touched and held that baby and assumed a responsibility for its growth and development. People still consider her one of theirs. He said when Travis Nixon moved to town in about the sixth grade the same thing happened to him, despite being in the sixth grade.

“People touched Travis Nixon, he became one of ours and we became responsible for his growth and development. He grew and developed into something to be proud of,” Watson said. “Even if you don’t give birth to them they’re still your kids.”

“You should’ve seen his grin,” said Watson, who described Nixon as a little kid, a rusty-headed, freckle-faced kid, with grins way back to his ears. “I think just looking back, if he could do anything over again, I don’t think he would’ve changed a thing,” Ray said. “A lot of people are having a difficult time with it, myself included,” Ray said. “It’s never easy to lose someone that young, that unexpected. It’s really hard to fathom. I think a lot of the community is still pretty numb. We’re trying to cope, to soak it in and understand, I know there’s been many phones calls to Nick and Maggie Nixon, Travis’ parents. The Nixons moved away from town after Travis graduated. Watson knew Nixon’s mother, Maggie, who was a bus driver for the school district and would drive the team to games. He said he believed that when she got the call telling her that her son was the 23rd, or whatever number, American fatality in Afghanistan this year, she responded, “He’s not going to be a number.”

Watson said, “That wasn’t a number that was killed. That was Travis Nixon, and he was one of ours. He was more than a number.”