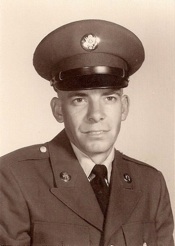 Husband of Shirley Wilson of Philadelphia, son of Mr. & Mrs. Woody Wilson of Sweetwater. He attended Sweetwater Elementary and Sweetwater High School and had been in the service for nearly four years. He left for Vietnam Sep 15th. He was riding in the lead truck of a convoy when a land mine exploded which demolished the truck and killed the young combat soldier. He is the first Monroe County native who died in action in the Vietnam War.