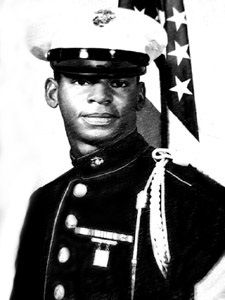 Corporal Tommy Lee Taylor was born and raised in Chattanooga and was the only boy in the Taylor Family of 13 girls. He enlisted in the Marines 25 October 1966, at the Nashville Recruiting Office. He was married to Martha and was the father of Rachel Taylor.
He served his country in the Vietnam War in the United States Marine Corps, as a bulk fuel specialist in D Company, 1st Battalion, 3rd Marines, 3rd Marine Division. His tour in Vietnam began on November 13, 1967. On May 5, 1968, Cpl. Taylor was killed fighting under hostile conditions in Quang Tri province, South Vietnam. He was 20 years old at the time of his death. Cpl. Taylor is buried at Chattanooga National Cemetery in Chattanooga, Tennessee, and is memorialized on the Vietnam Veterans Memorial on Panel 55E, Line 33.