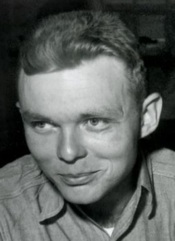 He was born and reared in Anderson County before moving to Knoxville where he enlisted for service. Burial: Robertsville Cemetery, Oak Ridge, Anderson County,Tennessee

On 14 Feb 1966 PCF-4, a swift boat from PCF Division 101, Task Force 115, was on patrol in Rach Gia Bay in the western part of the Mekong Delta. The boat carried a crew of 6 the boat commander was Ltjg Charles D. Lloyd. Toward the end of the afternoon a small raft carrying a Viet Cong flag was sighted close ashore. Ltjg Lloyd approached the raft cautiously and had hand grenades thrown close aboard it to detonate any explosives aboard the raft. When nothing happened, Lloyd directed his cox’n to bring the swift boat alongside the raft.

As PCF-4 came alongside, a Viet Cong ashore lit off a command-detonated mine. The PCF’s hull was ruptured and she sank at once. A nearby RVN naval vessel was able to take off the two surviving crewmen, who were then transported to Rach Gia – RM3 Robert R. Johnson by Army Huey and Ltjg Lloyd aboard PCF-3.

PCF-4’s hulk was well within gunshot range of the shore, which was controlled by the VC. Initial salvage efforts were hampered by enemy gunfire until the VC were discouraged by the combined firepower of Army helicopters, WPBs, PCFs, and VNN junks. Once the hulk was dragged into slightly deeper water, it was raised by the repair ship USS Krishna ARL-38 and the bodies of four crewmen recovered: